We’re writing this after dark from the cushions where we will sleep on the deck of our felucca. A felucca is an Egyptian sailboat, which have been used on the Nile for thousands of years. 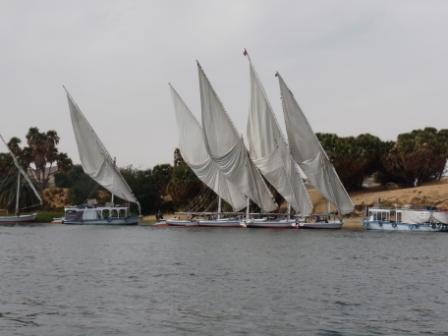 Our felucca is only 20 years old, but it has a new sail, and a good crew.

Today was our second day on the felucca, sailing from Aswan down the Nile to Daraw, a village within driving distance of Luxor.

We arranged the felucca by talking to locals near the harbour. Our first two attempts at negotiation failed, one due to a high price, and the second due to Diane’s bad feeling about the captain. On the 3rd try, we found a good captain, and negotiated a reasonable price. After inspecting his boat, we made arrangements to return after dinner, to meet the other crew member and go shopping for food in the local market.

The captain’s name is Hamedi. He is 32 years old, and is due to be married within the year. He comes from a village on the Nile near Aswan. He is Muslim, and prays every time we stop the felucca. He is one of 11 brothers and his 84 year old father has dementia. He speaks very little English. 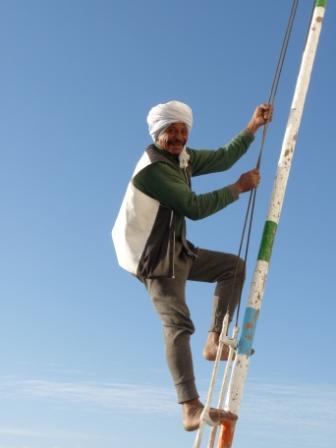 The other crew member, who is also the cook, is named Saeed. He is 55 years old. He was born is Sudan, and first came to Egypt down the Nile from Sudan when he was 9 years old. As a boy, he worked driving camels from Sudan to Abu Simbal, near Aswan. The camels traveled in the desert in the night, so as not be distracted by the greenery of the Nile, and to avoid the snakes and scorpions. Each trip took 30 days, and they navigated using the stars. Saeed speaks some English, but never went to school, and cannot read or write. Saeed has 3 children – 2 boys and a girl, who recently gave him his first grandchild, a girl. Saeed’s wife died when his son was 6 years old. She was recovering from some sort of abdominal surgery, and aggravated her injury when rescuing her son from the Nile.

Both Hamedi and Saeed are smokers, who smoke cigarettes laced with marijuana and hashish. They have spent their whole lives working on the Nile, and take good care of us. In fact, the last 2 days have been very relaxing. Hamedi sails, and Saeed cooks. He makes us Sudanese food, which includes vegetables, rice, bread, lentils, and perhaps some meat. For breakfast today, he made us eggs, and with our bread we had jam and some sort of cheese resembling cream cheese.

Our felucca is named Sendbad. I think it’s supposed to be Sinbad, after the famous sailor and adventurer. It is about 7 meters long, with a draft of 1.5 meters. It has a large triangular sail, and a keel which can be lifted up in shallow water. The rudder is large and made of wood.

We sleep on some boards spread between the 2 sides of the felucca, which are covered with cushions. They provided Diane and I with two blankets, by special request, which we use one on top of the other for extra warmth. There is a canopy, which is closed on 3 sides, made of an old sail. There are no mosquito nets, but there is no malaria in Egypt, and there are surprisingly few bugs.

The total distance we’re traveling is not great, about 35 kilometers, but feluccas only go about 15 to 20 kilometers per day. We are traveling the whole way with the current but against the wind, which requires tacking from one side of the Nile to the other, and provides us with great opportunities to view things along the banks. This morning Patrick steered the felucca, until he was relieved of command by Hamedi, probably for going too slow. 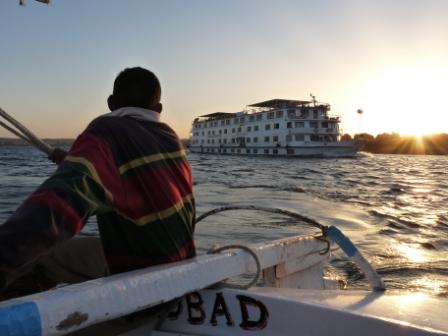 The Nile is a busy river. In addition to the many feluccas, there is the occasional ferry, or dredge, or rowboat with a fisherman. There is a steady stream of cruise ships, which travel between Luxor and Aswan. The clog the waterfront in Aswan, up to 100 ships at a time, blocking the view of the Nile, and running the engines all night long for power. As a result, the riverfront restaurants of Aswan are not what they used to be when Agatha Christy wrote “Death on the Nile” here.

The last two days have been very relaxing. We spend our time reading, eating, drinking Stella, and taking small walking excursions on the shore. Tonight, we sat around a fire on the shore, before returning to the felucca to write this and head to bed. It is said that a trip to Egypt is not complete unless you have traveled on the Nile. It is one of the world’s great rivers, and has been a terrific experience for us.