We entered Botswana from Zimbabwe and traveled west across the north of the country to the small city of Maun, the gateway to the Okavango Delta. This area was highly recommended to us by our friends Barb and Terry, who traveled here many years ago. Unfortunately, Botswana is not a discount travel destination. In fact, the whole country specifically markets itself as the high-end safari destination relative to the rest of Eastern and Southern African. As a result, most people arrive in Maun on pre-arranged trips, then immediately fly in to luxury lodges in the famous Okavango Delta. We had nothing arranged in advance, which is not recommended, but were hoping to take advantage of last minute rates at the end of the shoulder season.

The Okavango Delta is a 16,000 square kilometer maze of lagoons, channels, and islands. It is fed by the Okavango River, which runs 1430 kilometers from Angola, across Namibia, and into northwest Botswana, the only part of this flat dry country that is lush and green. The Delta supports a wide variety of wildlife, which move around in response to the changing water levels of the delta.

We decided to splurge with a couple of days at a luxury lodge. Somehow, this morphed into four days and three nights at two different luxury lodges (requiring three different flights) – the most expensive days of travel we’ve had, not just on this trip, but ever.

From the Maun airport, we flew about 35 minutes on a small Cessna to a private dirt airstrip near Shinde Camp. Diane had anticipated neither the small size of the plane nor the turbulence. 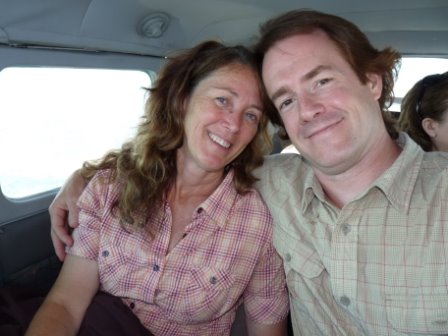 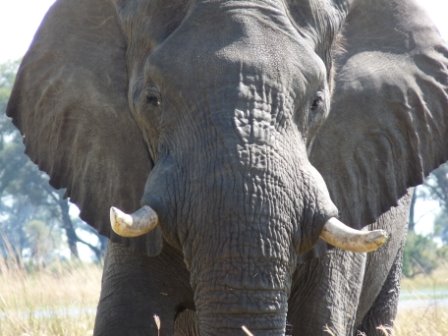 We were greeted by our guide in a safari vehicle, and immediately set out on an hour long game drive before lunch. In that short time we saw warthogs, giraffe, several different times of antelope, three lions, and a bull elephant that threatened to charge our vehicle in what is known as a ‘mock charge’ (the one that proceeds the ‘real charge’). 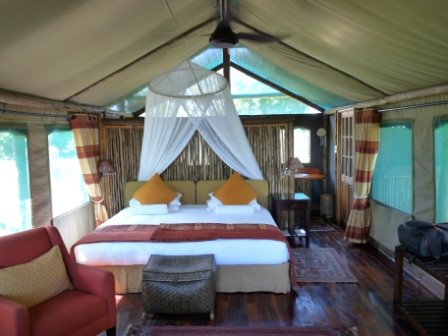 When we arrived at the lodge, we were greeted by the staff singing and dancing. We were shown around the beautiful open air facility, where all of the lounges and dining hall are on raised wooden platforms looking out onto the grasslands or waterways. This exclusive facility accommodates a maximum of 16 guests, and there are more staff than visitors. We stayed two nights in a ‘tent’, which was more like a luxury hotel suite. Inside was a king sized bed with white linens, a seating area, and a full bathroom including shower. Each morning we were woken by tea and coffee delivered to our room. Each time we left the room it was cleaned and reconfigured (bed made, mosquito nets up or down, windows and blinds opened or closed, fresh linens, floor washed). Each evening, while turning our beds down, a decanter of brandy and two glasses were set out on the night table.

Each day, in addition to three terrific meals, an afternoon siesta, afternoon tea, and an evening socializing on the deck around a campfire (also known as ‘bush television’), we participated in two activities of our choosing. We could choose between a game drive in an open safari vehicle, or a variety of activities in the Delta — a power boat trip, fishing trip, or a makoro trip. A makoro is a flat bottomed dugout canoe that is traditionally used in the delta, poled by a ‘poler’ through the shallow water. Our three hour makoro trip was just after sunrise, very quiet and relaxing.

Here is Patrick trying his hand at the makoro, causing the camp manager much concern.

We also went fishing in the Delta. See Diane’s catch below.

Note that Patrick’s fish was slightly larger, but the difference was not distinguishable to the naked eye.

At Shinde it seemed that almost every activity (makoro trip, vehicle safari, or getting into bed at night) was accompanied by a hot water bottle, something that Diane really enjoys. Each day at sunset we would pause, wherever we were (land or water), for ‘sundowners’, usually a couple of glasses of wine and some appetizers. This is a great tradition which we should consider adopting at home! 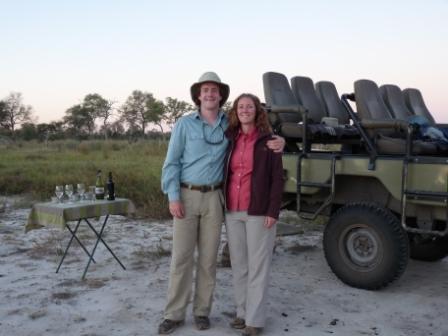 Of course, at these camps the bar was always open. We spent one afternoon enjoying gin and tonics in true colonial fashion. And the service was excellent. Patrick mentioned the first afternoon that he enjoyed a gin martini, with both the glass and gin chilled beforehand. Four hours later, upon our return from some sunset fishing, he was greeted by a manager holding a chilled martini. Impressive.

Because we were situated on the edge of the delta, we were challenged by some difficult water crossings in our vehicle. The Toyota Landcruiser diesel performed amazingly well, even when the entire engine and hood were completely under water, at which point, the driver and all passengers were balanced precariously on the armrests because both the vehicle and the seats were under water!

We spent the next two days at Lebala Camp, where we had an even more amazing ‘tent’ (this one with a double shower, double sink, and claw foot tub). Our tent was located on the edge of a hippo pool, and at night we were surrounded by hippos feeding. Hippos are one of the most dangerous animals in Africa in terms of human casualties (they feel very threatened when out of the water), so we were not allowed to leave our tent after dark without an escort. The deep grunts of the hippos around us at night were disconcerting, and our only protection was the seemingly implausible information that hippos have short legs, and therefore couldn’t climb the few stairs up to the raised platform where we slept. The only challenge was getting to our tent after dinner, and one night we had to detour around a stubborn hippo that was blocking the path.

Overall, we had an amazing four days in the Okavango Delta. Definitely a different caliber of safari than we’d enjoyed to date, and almost certainly different than the budget safari we had planned with our Canadian friends who would soon be joining us in Tanzania.