While in Leh we decided to do a side trip to Pangong Lake. An Australian guy we’d met in Rishikesh said it was ‘one of the most beautiful things I’ve ever seen’, which is an unusual amount of sentiment from an Aussie bloke. We had arranged to share the cost of a jeep and driver for the two day trip with the two young Belgians mentioned previously. Everything had been arranged in advance through a local tour and trekking agent.

The trip started off badly when, after the driver picked us up at our guest house in the early morning and took us to the agency, the person we’d arranged the trip with said that it might not be possible to make it to Pangong today due to high water levels at a river crossing. We’d heard of this possibility previously and had raised the question when we made the booking. We were reassured that it would not be an issue. Just a few kilometers before the lake there is a glacier-fed stream that needs to be forded. Water levels change throughout the day based on the temperature and sunshine and run highest in the afternoon. Vehicles often get trapped at the lake overnight until they can make the crossing in the morning. As a result, most people leave Leh for Pangong Lake by 6 AM, so they can complete the five and one half hour drive before noon, while the water levels are lower. It was now 8 AM. He said it was unlikely that we’d be able to make it there today, something he should have known about before he arranged the trip, so we now had an issue. After discussing the options with the owner of the agency, we agreed to proceed as planned, try to cross the river if possible, and if not, stay in a village about 30 kilometers back, then get up very early in the morning to make the crossing and be at the lake for sunrise.

The road to the lake wasn’t what we’d anticipated. For some reason, we were of the impression that this would be an easy drive. We knew that there was one mountain pass that we needed to cross to reach the valley where the lake is located, but we hadn’t given it much consideration. The drive started out lovely and relaxing as we slowly worked our way up into the mountains. As we went higher, the road became a paved track hugging the mountainside which was only wide enough for a single vehicle, with occasional pull-outs where two vehicles could pass. On the uphill side of the road were steep slopes or vertical cliffs of loose rock, and on the other side a precipice. There were occasional blocks of cemented rock or barrels filled with concrete to act as a vehicle guard rail, but they were few and far between, spaced far enough to raise the question, “Why bother?”

The road switch-backed to gain elevation, and the blind corners around rocky outcrops were very sharp and steep, such that it wasn’t possible to see if any traffic was coming, so pictures of musical horns resembling those of the ‘Whos’ from Dr. Seuss’s “The Grinch Who Stole Christmas” are painted on the rocks to remind the drivers to honk before each corner to warn any vehicles coming the other direction. Slowing down does not appear to be part of the strategy. Unfortunately the horn on our jeep didn’t work. 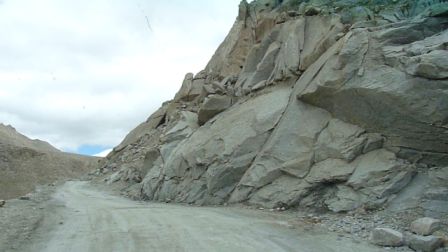 With about 20 kilometers to go before the top, we passed an Indian army post, and left the paved road behind. The road got steadily worse, progressing from loose gravel to loose rock. The driver swerved to avoid rocks which had fallen from the loose slopes above. 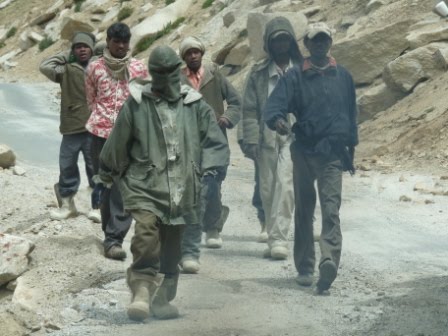 To our surprise, at this high elevation we ran into a couple of road crews that were reinforcing the road by taking loose rocks from the uphill side and dropping them on the downhill side. They were dressed for the cold, wearing wool clothing and balaclavas, all in darks shades muted with the dust of the surrounding hillside, resembling a post-apocalyptic vision. It turned out that these crews are part of specialist team looking after one of the world’s highest roadways, and taking great personal risk to do so.

We reached the pass called Chang La, and stopped for a few minutes to celebrate arriving safely. Chang La is the 3rd highest motorable pass in the world. At 17,500 feet it is within 2,000 feet of the height of Mt. Kilimanjaro. 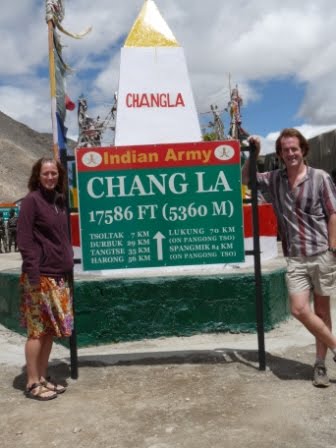 We crossed the dreaded high water without too much difficulty, 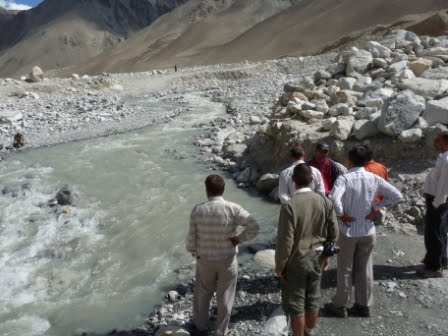 and got our first view of Pangong Lake. 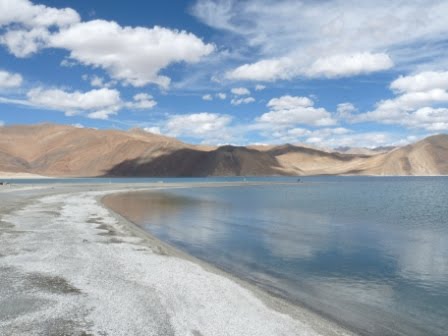 It was beautiful, but not the most beautiful thing we’ve seen. Perhaps we’re spoiled with too many beautiful lakes and mountains in British Columbia. We bumped and rattled our way down the lakeshore, without the benefit of a road, and began the search for a guest house. There is a luxury tented camp on the lakeshore during the brief summer months (the lake is at over 14,000 feet), but we were looking for something cheaper.

We found space in the home of a woman with a small boy and an absentee military husband. Like the few other buildings near the lake, it was made of stone and mud with a dirt floor, no heat, no electricity, no plumbing and a squat outhouse. Our room had a mattress lying on grass mats that covered the ground. Thankfully we got a mix of new and only-slept-on-once-by-someone-else-but-not-washed sheets.

We walked along the lake to take some photos. Our hostess managed to wrangle up three large beers from somewhere else that we shared with the Belgian couple while the sun was setting. Dinner was rice, dhal, vegetables, and chapatti, served on low tables while we sat on cushions on the floor of the room where she and her son ‘live’. Cooking, eating, and sleeping are all done in the same room. Our guide Raja translated so we could speak with her, and he also taught us a few words of Ladakhi.

We woke very early to walk along the lake and watch the sunrise, but it was cold so we only lasted about thirty minutes and then went back to bed. Breakfast was an ‘omelet’ (which shouldn’t really be called an omelet if it contains only eggs) and chapatti. After breakfast, we loaded our bags in the vehicle, and then starting walking back along the lake until Raja picked us up. It was another long and hair-raising drive back to Leh, but we had a good driver and made it without incident.

Here’s Diane checking out some of local wildlife… 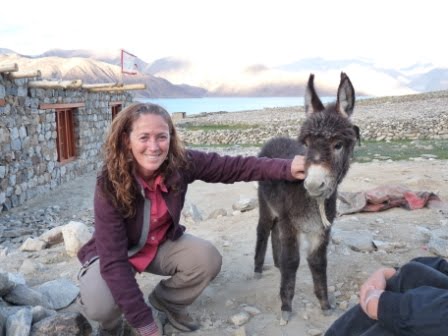