Rishikesh is a small city in the state of Uttarkhand that is known for its yoga and meditation classes, trekking, and white water rafting down the Ganges River, known in India as the ‘Ganga’. It is also a holy city where Hindu pilgrims come to the site where the Ganga emerges from the Himalayan mountains. The Beatles visited the ashram of the Maharishi Mahesh Yoga in the late 60’s and ever since Rishikesh has been a famous place for people seeking a spiritual retreat. Rishikesh is now considered to be to “Yoga Capital of the World”. 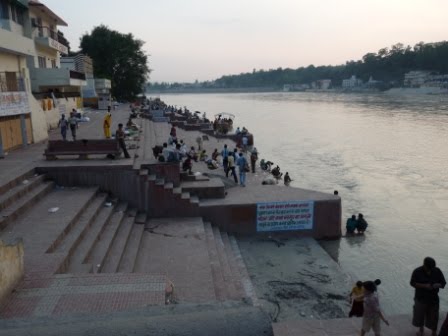 On the day that we arrived it was very busy with lots of people and noise, which did not really match the yoga experience we had in mind. The streets were filled with orange garbed pilgrims who had come to worship at Rishikesh’s temples and to swim in the Ganga.

Apparently we arrived at the peak of the Hindu pilgrimage season, but fortunately within a day lots of people had moved on and it was a lot quieter.

In pursuit of a more spiritual experience, we spent five nights at an Ashram, with the plan to participate in yoga, eat a healthy vegetarian diet, and to relax. Our stay included yoga classes two times a day, our accommodations and meals. Each yoga class was two hours long, with the first at 6:00 a.m. and then again at 4:00 p.m. A bell rang at 5:30 AM for morning wakeup, and again before each meal which consisted of basic vegetarian Indian dishes, including for breakfast. Although we like Indian food, we still haven’t gotten used to eating it for breakfast, and try to find eggs, toast, or cereal whenever we can. We ate sitting on the floor cross-legged with our tin plates on a small stools in front of us. It’s been a long time since either of us has sat cross-legged on a hard floor for any period of time, and we were both surprised how uncomfortable it was. After our first meal Patrick said he felt like he had pulled a muscle and he hadn’t even been to his first yoga class yet. Obviously we could benefit from some yoga.

We went to the afternoon yoga class the day we arrived. The classes were good but a bit challenging. Diane is definitely not as flexible as she once was. Patrick never was, but participated fully and went to three classes within the first twenty-six hours at the ashram. Diane came down with a cold and did not feel well enough for yoga after her first class. Just when she was starting to feel a bit better Patrick got sick. So as it turned out, we didn’t do as much yoga as we’d planned, and we spent a lot of time in bed trying to feel better. However, Patrick really enjoyed the yoga and would definitely do it again.

The Ganga runs right through the middle of Rishikesh. Two suspension bridges called Ram Jhula and Lakshman Jhula connect the two halves of the city. These pedestrian-only bridges have a steady traffic of people, cows, monkeys and motorcycles. So much for pedestrian only. 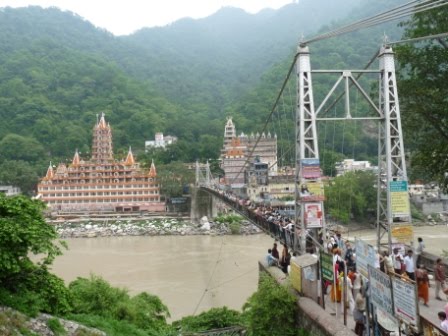 We spent a lot of time at a restaurant by one of the bridges over the Ganga, which overlooked the 13-storey Hindu temples of Swarg Niwas and Shri Trayanbakshwar. This open air restaurant served great home-made vegetable pasta and brown bread. Very nice if you ignored the flies. Patrick discovered a mango juice fruit drink called ‘Maaza’, bottled by Coca-Cola, which was a life saver as he recovered from the stomach flu. During one of our afternoons of people watching and talking with other travelers, Diane got some great pictures of some baby monkeys in the tree below the restaurant.

We aren’t Yoga gurus yet, but we are definitely developing our skills in sightseeing, people watching and knowing when to kick back and relax.