This is the first of 3 related postings about Auschwitz.  The second post focuses on Auschwitz II-Birkenau, and the last post on my experience visiting the memorial.

Auschwitz was established as a concentration camp, a place where criminals, political prisoners, academics, dissidents, prisoners of war, Jews, Roma (gypsies), homosexuals, and other people considered dangerous or undesirable by the Nazis were held and forced to work as slave labourers.  In its first year (1940-1941) it was converted from a Polish military camp and grew to hold over 10,000 inmates, the large majority of whom were Polish.  Over the years 1940-1945 Auschwitz expanded to become the largest German concentration & extermination camp.  It consisted of Auschwitz I (the original labour camp and administrative center for the whole complex),  Auschwitz II–Birkenau (a labour & extermination camp),  Auschwitz III–Monowitz (a labour camp), and 45 satellite labour camps.

The site for Auschwitz was chosen because it was near an industrial area where slave labourers were needed to help the war effort.  It was also at the center of the rail network, allowing easy transport of goods and people across Europe. Additionally, it was a large area and relatively isolated from nearby towns.  The Nazis were concerned about the opinion of German citizens and some Western nations (e.g. Western Europe, America) and endeavored to keep secret what was really happening in their concentration camps.  Initially the Red Cross was allowed to visit the camps, and so some had hospitals and even schools, though they were primarily for show.  This is also why they located their 6 main extermination camps in Poland, where they were less visible to observers from the West.

Prisoners who would be staying in the camp were stripped of everything.  They surrendered all their personal property including their clothes.  Children with blond hair and blue eyes were separated from their parents, to be sent elsewhere for education.  Men and women were completely shaved and their hair sold to make wigs, blankets, and other items.  In the early days of the camp prisoners were photographed for identification, but this was later deemed to be too expensive and not particularly useful (prisoners lost so much weight that they soon didn’t resemble their pictures anyway) and so it was abandoned.  Today the hallways of the prisoner barracks are filled with thousands of these photos, row upon row of those who died here. 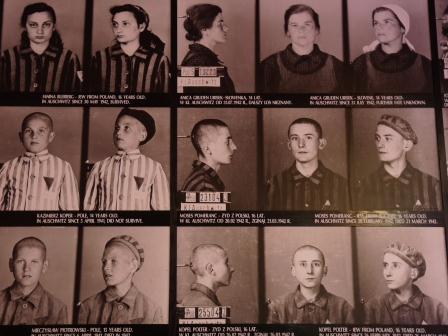 Prisoners also lost their identities.  All of their personal documents were destroyed.  Instead of names they were assigned numbers, one of many techniques used by the guards to dehumanize them, making them easier to abuse and ultimately to kill.  Initially names were sewn on to prisoner uniforms, but this was an added effort, so they switched to tattooing numbers directly on to the prisoners’ bodies.

Inmates wore striped pyjamas and wooden clogs without socks.  The footwear was often ill fitting leading to foot problems and pain that made it difficult to walk.  These were the only clothes they wore in all seasons, even while working outside in winter.  They worked and slept in a single garment that was not changed.  Like in other concentration camps, prisoner uniforms had patches that distinguished their group (criminal, Jew, homosexual, Roma, etc.) 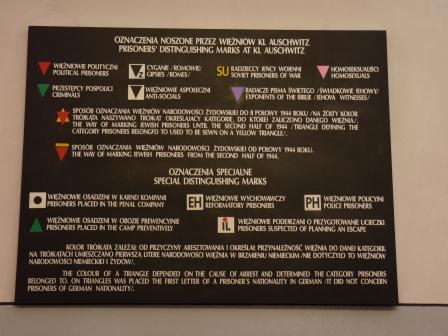 Badges used to categorize prisoners on their clothing

The prisoner barracks, preserved to this day, are made of brick.  They were only used for sleeping as prisoners worked all day.  Although they had heaters, insufficient fuel was provided to warm the buildings in winter.  Initially the camp had no toilet facilities, and prisoners had to go outside.  They were only given 2 opportunities per day to do so. 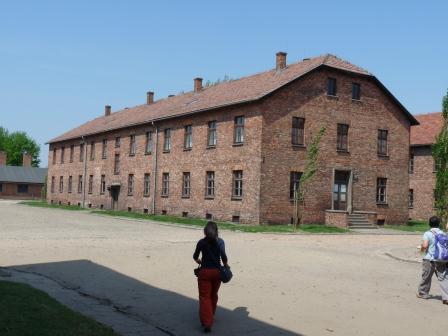 All inmates had to work in the nearby arms factories.  Those who couldn’t work were murdered.  Prisoners worked 10-12 hours a day, 6 days a week.  Most worked outside of the camp and had to walk to work.  To maintain illusions, a band played each morning as they marched out of the camp and when they returned each evening.  Every evening the prisoners were counted, so those who died during the day had to be carried back by their fellow prisoners for roll call.  Auschwitz’s 45 satellite camps were established to allow prisoners to sleep closer to their work, thereby losing less productive time having to walk to and from each day.  The harsh work requirements, combined with poor nutrition and hygiene, led to high death rates. 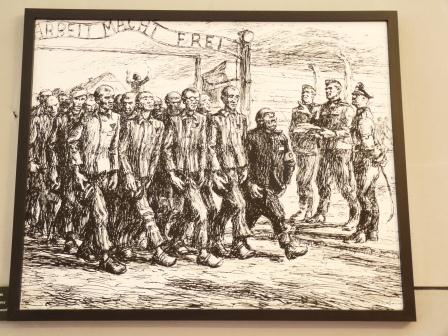 The warehouses where prisoners sorted through the belongings confiscated from incoming prisoners and the dead were known as Canada.  At this time Canada was regarded as a paradise by Poles; it had a reputation as a land of plenty and was a desirable location for Europeans to emigrate to.  Working in ‘Canada’ was one of the best jobs to have in the camp.  The work was indoors.  Sometimes food could be found in people’s belongings.  Occasionally the workers smuggled out valuables which they could trade to the Nazi guards in exchange for favours.

Auschwitz was run in a very orderly and efficient manner, supervised by the SS (Schutzstaffel meaning ‘protection squadron’).  German doctors, dentists, engineers, and other educated people helped to design and to operate the camp.  The day-to-day enforcement of rules and the maintenance of order was handled by kapos, prisoners selected by the SS to be in charge of their assigned groups.  Initially, they were recruited only from the criminal population at Auschwitz.  In return, they were given special privileges, which increased their chances of surviving.  Our guide told us repeatedly that we should not judge these people too harshly, as they were only trying to stay alive.

Prisoners were fed 3 meals a day but the food was so limited and of such poor quality that starvation was the biggest killer in the camp.  We saw a picture of an adult woman who was liberated from the camp and who weighed only 25 kilograms (55 pounds) after 4 months in hospital.  Another major factor was exposure.  Working inside greatly increased one’s chance of survival.  In summer, those who worked outside might live a few months – in winter, a few weeks. 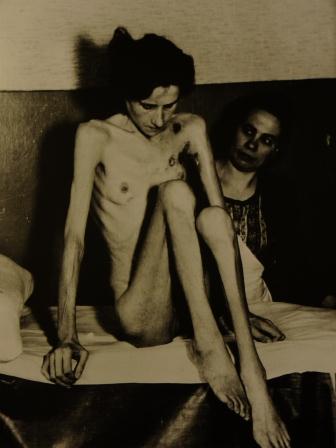 Auschwitz survivor after 4 months in hospital

Many prisoners were tortured, starved, and executed in Auschwitz I.  Barrack Block 11 was reserved for this purpose.  Although the guards tried to keep these atrocities quiet, there are no secrets in a small ‘town’, and word got around quickly. On September 3, 1941, the deputy camp commandant experimented on 600 Russian POWs and 250 Polish inmates by gathering them in the basement of Barrack Block 11 and gassing them with Zyklon B, a deadly cyanide-based pesticide.  Following this successful test, a small gas chamber and crematorium was established in 1941 by converting an existing bunker.  It operated for 1 year and was used to kill 60,000 people before the larger gas chambers were built at Auschwitz II-Birkenau.  We walked through this gas chamber.  Diane was initially reluctant to enter but decided that it was more important to see what was inside.

The first Commandant of Auschwitz between 1940 and 1943 was Rudolf Franz Ferdinand Höss (not to be confused with Rudolf Hess who was Adolf Hitler’s Deputy).  Höss lived at Auschwitz I in a villa with his wife and 5 children, about 100 meters from the first gas chamber built there.  He claimed that he kept the real purpose of the camp a secret from outsiders for 3 years and did not tell anyone until he shared it with his wife in 1942. 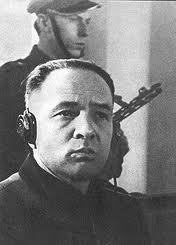 Most of the guards who worked at Auschwitz preferred it to other more dangerous wartime assignments. According to Höss’s diary, after the war many of those involved directly in the killing went mad or committed suicide.

Josef Mengele was among the German doctors at the camp who performed human experiments on prisoners.  He was known as ‘The Angel of Death’ for the cruel things he did, particularly to identical twins.  Bayer and other pharmaceutical companies also bought prisoners to use as guinea pigs for testing new drugs. 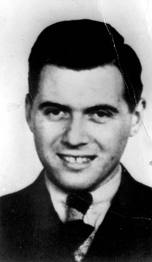 To be continued.  This is the first of 3 related postings about Auschwitz.  The second post focuses on Auschwitz II-Birkenau, and the last post on my experience visiting the memorial.