We took a short break from our travels to meet up with our friend Lee who was in Barcelona, Spain on business.  We left the S&M Motel safe and secure in a campground in Budapest, Hungary and arranged for a taxi to pick us up there at 3 AM in order to make our 6 AM flight.  Diane and I had arranged to meet Lee at the Barcelona Airport at 9 AM where we were picking up a rental car.  Unfortunately, Lee was waiting at the Budget car rental desk at Terminal 1 while we were waiting at the Budget car rental desk at Terminal 2, but this misstep was quickly resolved with a phone call and a shuttle bus ride.

We spent our first day and night in Barcelona.  After some wine in our hotel room and a mohito at the hotel’s 360 degree rooftop bar, we headed to the tapas bar Quimet y Quimet highly rated by locals and traveling ‘foodies’.  It is small and crowded, standing room only, which is OK because there are no chairs.  The walls are stacked high with wine and other delicacies.  They specialize in tantalizing seafood, many of which have been preserved in tins.  Exceptional food.  Some of the best we’ve had in Europe.  Particularly memorable were the olives wrapped in anchovies.  A taste explosion.  My mouth is watering as I write this. 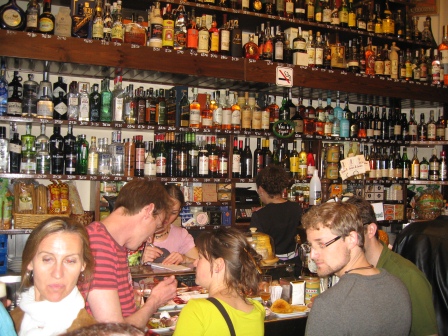 Completed food orders are passed through the crowd from the small bar area where the food is prepared. Like most tapas bars in Spain, the many small paper napkins used are discarded and accumulate crumpled on the floor throughout the evening.  We drank the house dark beer and then switched to some terrific red wine.  Afterwards we found our way to a nearby bar recommended by the woman serving us at Quimet, where we ate spicy olives and continued drinking. 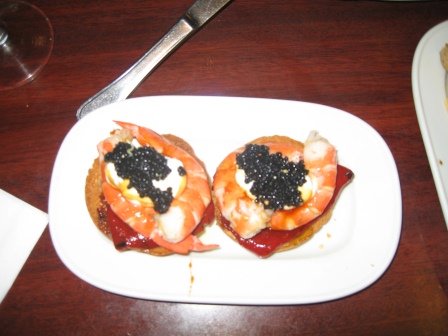 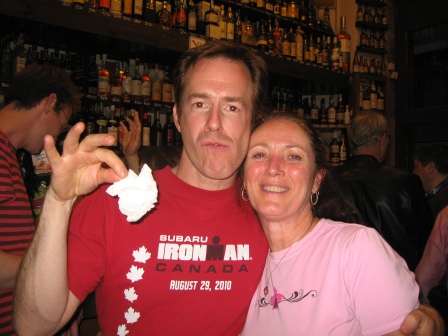 The next morning, nursing our hangovers, Lee and I ate at the hotel breakfast buffet.  Diane wasn’t ready to face a buffet, and stayed in bed until we returned.  We got packed, loaded the car, and drove about an hour to the village of Monistrol.  It is located at the base of Montserrat, a multi-peaked mountain formation that is well known as the home of Santa Maria de Montserrat, a Benedictine Abbey.  The sanctuary there is home to the Virgin of Montserrat, a statue of Madonna and child, one of the many Black Madonnas of Europe.  Diane and I had visited on a dark day last November, and were glad to see it again in better weather. 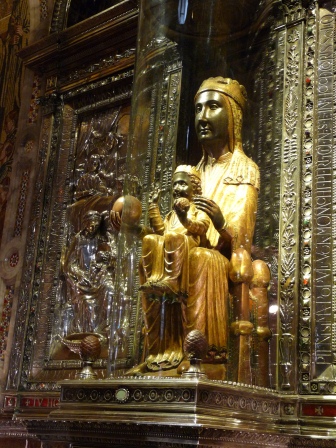 The Virgin of Montserrat

After a stop at the local climbing store where virtually no English was spoken, and at some local shops to get food for lunch, we drove up the winding road to the parking area, then caught the Funicular de Sant Joan (a funicular railway) up to the top of the mountain.  From here it was only a short walk to the base of the Gorros, a series of small peaks made of the pink conglomerate rock found throughout Montserrat.  We started to climb the 5-star route Bandalona on Gorro Frigi, but soon lost the line and ended up finishing on Opera Prima. 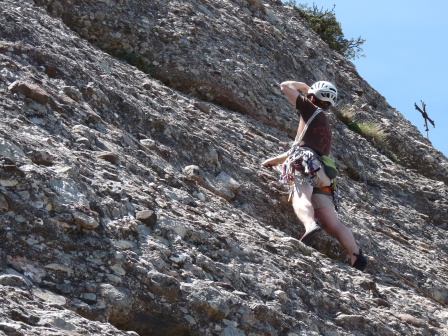 The climbing in Montserrat is predominantly face climbing, where purchase is gained on the many small rocks that appear to be stuck into the rough surface of the peaks.  The other climbers nearby were a group of young people from, of all places, Newfoundland.  They complained bitterly about the runouts between protective bolts, despite the fact that the routes on the Gorros are considered to be the most well-protected of Montserrat’s notoriously run-out climbs. 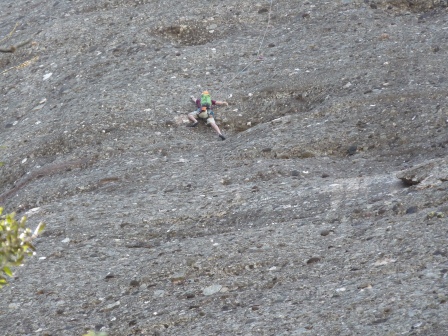 After 5 pitches we reached the top then climbed down the back side to join Diane who was waiting for us near the base.  After a celebratory beer, we walked down to the Monastery the long way, via the climber’s refuge at Saint Benet (another climbing area here).  There we met the refuge guardian Angel (not the kind with wings, but a real man named ‘Angel’ whose job is ‘guardian’ of this climber’s hut), who tried to be very helpful despite his limited English.  He told us that there are over 6000 climbing routes on the peaks of Montserrat, with only about 5000 published in one guide book or another.  A lifetime of climbing within a few square kilometers.

The next day we decided to climb El Cavall Bernat, a huge free-standing needle that is the symbol of the area.  This monolith, standing over 700 feet tall, is a test piece, a right of passage for local climbers.  All those who climb it are considered members of Grup Cavall Bernat, an honorific climbers club founded in 1978 whose sole requirement for membership is having climbed the peak.  We chose to climb the most stunning profile of the mountain known as Punsola Reniu. 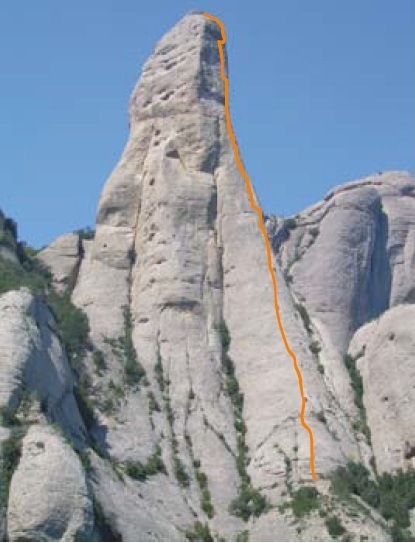 We got a late start since breakfast at our Hostel Guillemes, per the Spanish schedule, was not available until 9 AM and afterwards we needed to buy some food for lunch.  By the time we drove up the mountain to the parking area, racked our gear, and completed the steep hike to the base (about 45 minutes), it was late and it was hot.  We were baking in the sun as we started to climb around 1 PM.  I backed off the first pitch, not confident in my psych having not climbed outdoors in almost 2 years. 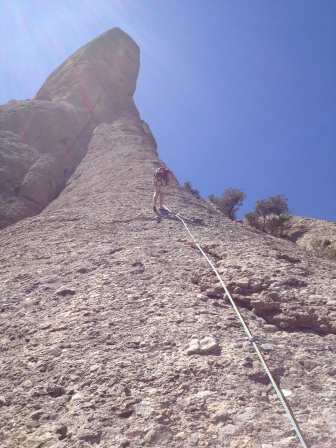 Patrick on the first pitch. Notice how steep the upper pitches are!

Lee was a rock star.  He led and we made short work of the first 3 pitches, gaining on the party of 2 who were high up on the face above us, the only other people visible. 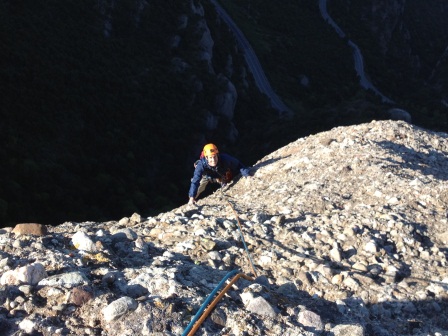 By pitch 3 we made it into the shade, a welcome relief from the heat of the afternoon.  The difficulty of the climbing and the steepness of the route both increase steadily.  The final pitch leaves the belay station, turns a corner, and requires mandatory free climbing to the summit which is adorned with a statue of the Madonna and Child. 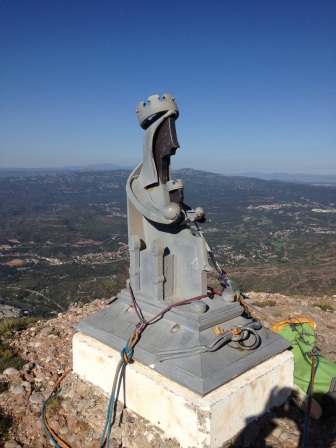 Madonna and Child on the summit 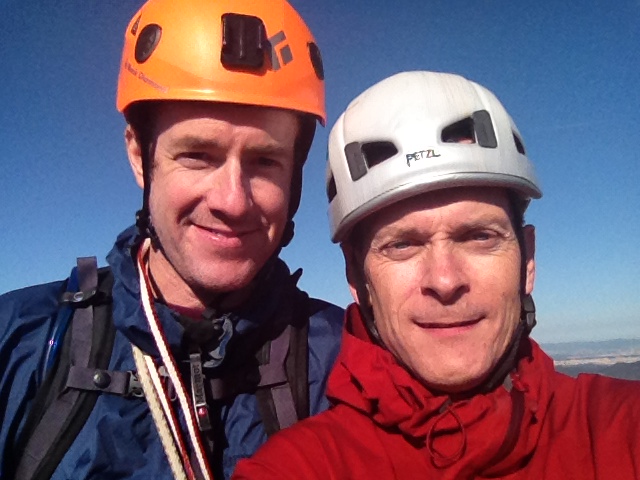 Patrick and Lee on the summit!

Diane spent her day wandering the small town and enjoying lunch out.  After rappelling off the summit and completed the long down climb and hike out, we showered and then joined her for dinner at the same bar in the town square that we’d eaten at the night before.  Spanish beer with calamari, cockles, meatballs, potatoes, and bread.

On the morning of Day 3 we changed to a different hotel as our room was no longer available.  The next hotel wasn’t nearly as nice, but it was cheaper.  Lee and I rode the funicular up and climbed Magdalena Superior, another one of the Gorros peaks.  Another spectacular line of increasing difficultly and a great top out.  We rappelled the route and were back to the hotel before Diane, who we learned afterwards was getting her hair done at a local salon by a young woman who spoke almost no English.  Diane said she used a lot of hand gestures and pointing to communicate, which seemed to work well because her hair looked great.

That night we ate at the hotel’s restaurant.  Diane chose it after hearing from several local sources that it was good.  We shared a fine dining verison of patatas bravas (potatoes with spicy tomato sauce that translates as ‘wild potatoes’) and a succulent appetizer platter followed by an amazing pan of lobster paella.

On our last day of climbing, Lee and I still had the energy to climb a via ferrata (translates from Italian as ‘the iron way’), a style of climbing where the route is augmented with cables or rungs to make the climbing faster and safer.  The first such routes were established to allow troops to move through the Alps more quickly and safely.  Teresina ascends Sant Jeroni, the highest peak of Montserrat.  It was great to climb so quickly and freely and to finish by pulling over the railing of the viewing platform that hikers can only walk to.

The next morning we caught an early flight back to Budapest.  A very enjoyable 5 days.  It was great to be climbing again, especially in such a spectacularly beautiful location.  The warmer weather was fabulous; we haven’t had much so far this trip.  It was terrific to climbing with my friend Lee and to complete some outstanding routes, each of which topped out on a different peak.  A wonderful getaway during our extended travels.