We didn’t book a private cruise, but we had the entire ship virtually to ourselves.  It was a pleasant surprise, but strange nonetheless.  In each room the staff stood around attentively, watching our every move in the hopes that we might need something.  They outnumbered us 10 to 1.  Each time we walked past the empty cafeteria, with a full assortment of hot and cold food prepared and on display, I felt the eyes of the staff willing me to stop and purchase something.

We left Greece from the Peloponnesian port of Patras, heading to Italy by ferry.  We arrived in Patras in late afternoon, and like so often seems to happen to us, virtually everything was closed.  Another Greek holiday, in this case Whit Monday, the holiday celebrated the day after Pentecost.   Down by the harbour we did find an open ticket office for Superfast Ferries, so we went in and learned that there was a ship leaving in short order.  To make it, we needed to be at the dock in under 30 minutes.  We decided to go for it, and booked passage for ‘camping on deck’.  This is a unique option provided by some ferry companies that allows you to sleep in your motorhome on the deck.  The use of gas is not allowed, but they do provide an electrical connection to operate the refrigerator, lights, and electric cook top (if your camper has one).  Thankfully we do have one electric burner, allowing us to cook onboard, but we didn’t have any food having just spent several days free camping on Greek beaches.  We were told that there was an open grocery store near the port if we hurried.

After a blitz through Carrefour, we arrived at the dock in a scramble, and were turned back when the ‘tickets’ we’d been given were actually vouchers that had to be converted at the Superfast office.  Diane did this while I kept the engine idling, and we raced back through the security check and up the ramp onto a ghost ship. 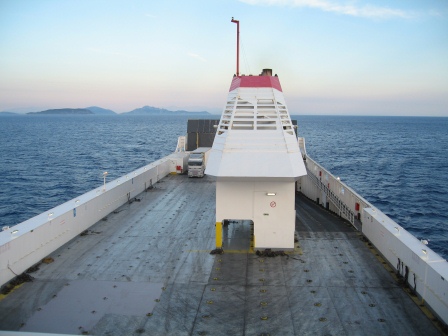 We were directed to park near the rail, and a crew member pulled an electrical cable down from the ceiling to connect us.  We were under cover for some protection from the sun and or rain, but still had a view onto the ocean. 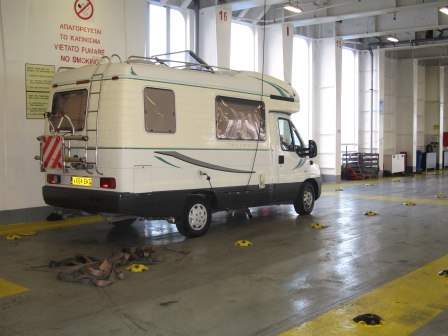 Our cabin on the S&M Cruise Line

The weird thing was, there were almost no other vehicles on board.  At the very far end of the deck there was a single semi-trailer. Parked behind us were a few cars which appeared to be owned by the crew.  And that was it, on a ship so big that a crew member used a motor scooter to get around our deck rather than walk.  It was basically empty.  I assumed that more vehicles would arrive, but at the appointed time we set sail empty. 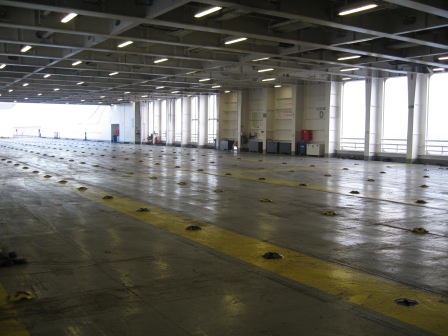 We went upstairs to peruse the ship.  There was a beautiful main deck with several lounges, a bar, a cafeteria, and a casino, all empty.  Above this were 2 deserted decks of staterooms.  There were two external terraces surrounded by waiters to provide table service to the non-existent patrons.  Collectively, spread over the entire ship, I think that there were less than 10 people, excluding the staff who were far more numerous.  There was a deck crew, a full kitchen with restaurant staff, a bartender with servers, an information desk with 2 staff, and a variety of officers and other attendants. 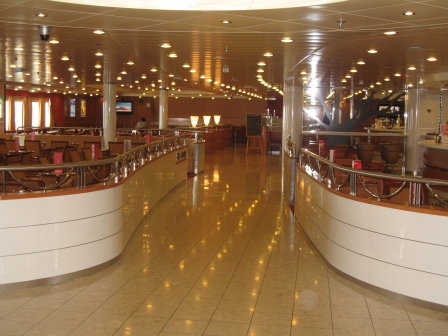 The cafeteria was the most shocking.  They had a full selection of hot entrees (fish, meat, etc.), side dishes, and cold dishes.  I spied at least 10 beautiful salmon salads waiting in the cooler, but I did not see a single person eat. 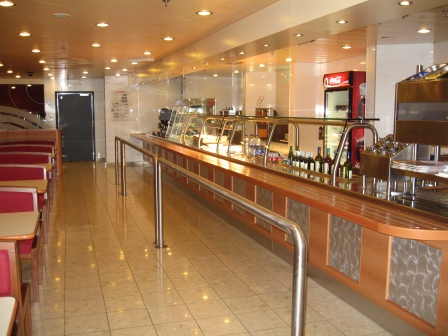 We did our best to support the Greek economy, drinking a pricey beer on the upper deck as Greece faded into the distance. 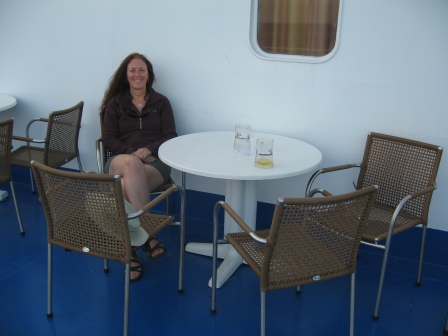 Doing our part to help support the Greek economy!

Despite the guilt-inducing looks from the staff, Diane cooked us dinner in the camper.  We used the terrific shower facilities on board.  Who puts marble floors and sinks on a ferry?  When we went to bed, I was still in a state of shock about how vacant the ship was.  How could they possibly afford to run such a big ferry empty, especially on an international route?

We got our answer at 1 AM.  We were awakened by the loud noise of large trucks and other vehicles.  It seems our ferry wouldn’t be completely empty for the whole voyage after all.

In the morning, we peered outside and found that we were completed hemmed in by large trucks. 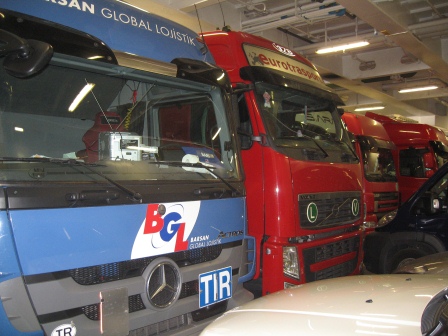 Our empty deck was now full.  The trucks were so tightly crammed together that we couldn’t walk between them. 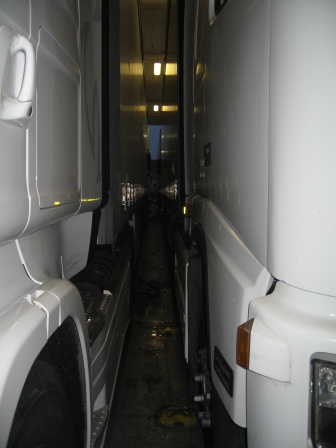 Even though our private cruise was over, we still enjoyed the rest of our voyage, arriving in Bari,  Italy in the late morning.  We still had a nice view, and Diane even hung out the laundry in the Mediterranean breeze! 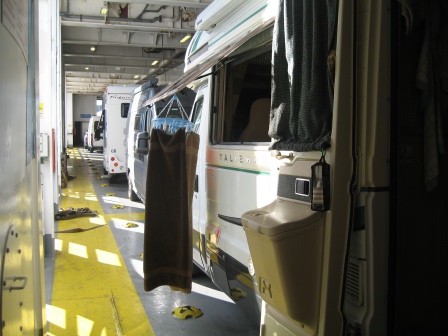 Towels with that fresh ocean smell!