Driving in Southern Italy is challenging and exciting.  It requires me to be on my toes, constantly ready to react. It stresses Diane out.  I’ve written previously about driving in Europe, but driving near Naples takes this to another level and is not for the faint of heart.  Here are some of the challenges we face…

Most people here drive small, maneuverable cars much faster than the posted speed limit.  They rarely stay in their own lane, often spanning two lanes or crossing into an oncoming one. They pass whenever possible, even on hills or blind corners when it seems unsafe to do so, expecting that the oncoming cars will make way.

Some of this erratic driving is necessitated by parked vehicles blocking the roadway.  Despite the fact that the cars are generally small, the parking spaces are even smaller, and people frequently exceed the boundaries.  They will park wherever possible, including on sidewalks, at corners, and in crosswalks.  They will park nose-in to a parallel parking place, with their tail hanging out in the street.  The drivers of parked cars often open their doors without looking, requiring one to be constantly on the lookout for motion in parked cars.  They will often double park (parking in the street beside cars that are parallel parked) as if putting their 4-way emergency flashing lights on magically turns wherever they happen to be into a legitimate parking spot.  Sometimes I’ve seen them triple park, blocking not only one lane, but part of the oncoming lane too! 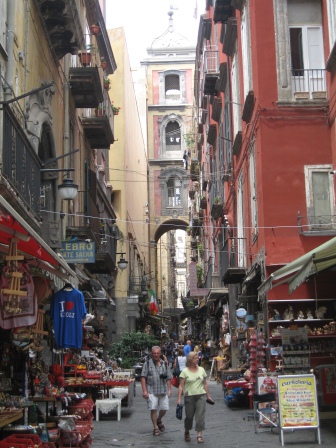 Try getting a motorhome down this street!

Most shocking is a peculiar practice in Naples where drivers will shop from their cars.  They stop in front of a small store, usually double-parked, and honk their horns.  The shopkeeper will emerge, get their order and their money, then disappear into the store to return a minute later with their purchase and their change.  This is happening while other cars stack up behind or attempt to pass, without any apparent concern for them, as if this is completely normal (well, I guess it is in Naples). 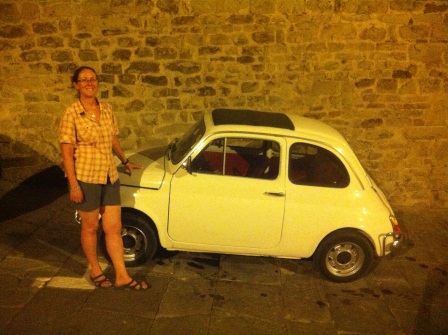 Yes, this is someone’s real car!

If the cars are bad, the motorcycles and scooters are worse.  The majority of them are scooters (a lot of Vespas but now many Asian manufacturers too), so I’ll refer to them all as ‘scooters’.  Lane splitting by this plague on wheels is normal.  They drive between the other cars, passing on the left and right while traffic is moving, on blind corners, and in busy intersections.  At stop lights they worm their way to the head of the line, often performing major acrobatics to get to the front, or as close to it as possible, wedged in between the other cars and/or the curb.  When the light turns green, they race off ahead (they’re quick off the line), but they sometimes get passed again if the roadway has a higher speed limit, in which case they repeat the procedure at the next light.

Crazy scooter driving was commonplace in Asia, but I wasn’t behind the wheel there.  It’s much more exciting when one is in the thick of it.  A particularly shocking example we’ve seen was a man driving his scooter with a very young child, perhaps 3 years old, standing between his legs while he drove.  The child wasn’t wearing a helmet, wasn’t secured, and appeared to barely be old enough to hang on to.  The child wasn’t tall enough to reach the handlebars, even while standing, so was holding on to something lower, behind the front console. 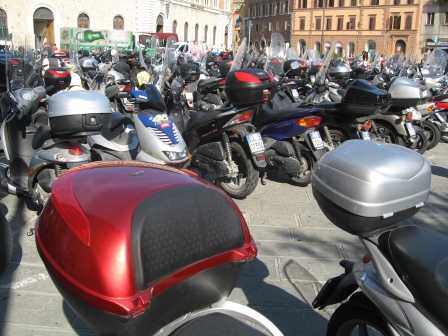 On the other hand, we did receive a very nice favour from a scooter driver.  A scooter behind us started honking and drive up beside me so I slowed down and eventually stopped.  The driver reached over and gave me my swim goggles, which I’d forgotten to bring in off the rear rack of our camper where they’d been clipped with a clothes pin to dry.  Although she didn’t speak English, she must have seen them fall off while we were driving, retrieved them in the middle of this crazy traffic (at no small risk to herself), and then chased us down to return them.  Perhaps scooters are good for something after all?

Our recent visit to the United States got me thinking about the challenges facing America today.  I think that the road ahead will be very difficult.

What is an empire?

Empires are nations whose power and influence extend beyond their borders.  They tend to enjoy false economies based on cheap labour and the plunder of other nations.  This is typically enabled by large and costly militaries.

Why do empires decline?

Empires enjoy false economies based on the continued access to cheap resources.  Cultural decay sets in when people become used to living lives subsidized by cheap imports and high levels of personal and government debt.  When empire economies falter, their militaries become an economic drain, but remain essential to try to protect the empire’s position despite its declining influence.  People used to an easier life squabble over how to divide the pie, rather than working together to increase the size of it.

Empires fall because they must eventually begin living within their means.  If they do not do this, they can only hope to delay the decline by borrowing against future generations – e.g. letting infrastructure decay, running a deficit, etc.

I believe that the United States currently enjoys empire status.  Its economic power and military reach allow it to influence world events far more than its size and population would suggest.  Through foreign and economic policy it exerts control over other countries, up to and including cases where some governments survive only because of U.S. support.  Why are the Americans at the table in virtually every peace talk?  What gives the Americans the right to chastise Palestine for recently seeking a recognition of statehood at the UN?

Even when the American economy was in free fall, investors flocked to the U.S. dollar for safety.  Despite serious economic problems and massive debt levels the U.S. enjoys very low interest rates, unlike other countries where interest rates rise as the risk of default increases (e.g. Ireland, Greece).  Through illegal immigration, multinational corporations, and lax environmental standards, the U.S. enjoys access to cheap labour and raw materials and consumes more resources on a per capita basis than most other countries.  And they don’t want to share.

The massive U.S. military allows them to project force anywhere in the world.  According to reports of the US. Department of Defence Department of Defence Base Structure Report and Active Duty Military Personnel Strengths by Regional Area and Country the US military has over 540,000 facilities located on nearly 5,000 sites worldwide.  They have facilities in 39 foreign countries, with the majority of these located in Germany (194 sites, 52,000 personnel), Japan (108 sites, 36,000 personnel), and South Korea (82 sites, 29,000 personnel).  When the U.S. wins a war, they never really leave.  Despite their recent withdrawal from Iraq, I doubt that it will turn out to be any different in the long run.  There are over 1,400,000 U.S. Active Duty military personnel.  Of these, almost 300,000 were stationed in 150 other countries (including 126 people in Canada).  This is in addition to 104,000 deployed in Afghanistan (‘Operation Enduring Freedom’, an overly optimistic name) and 85,000 in Iraq (‘Operation New Dawn’, sounds like a B-movie).  The troops in Iraq were recently removed, but most are likely deployed elsewhere.  All together, the U.S. military has 78,000 personnel located in Europe alone.

The massive U.S. military props up the government and allows it to exert power worldwide, but at a very high cost.  In 2010, 20% of the US budget ($689 Billion) went to the Defence Department (Source: Wikipedia), an amount almost equal to that spent on Social Security ($701 Billion) and Medicare & Medicaid ($793 Billion).  The U.S. industrial military complex has a massive economic effect and exerts its own political influence to sustain itself.  Despite the recent US economic problems, spending on the U.S. military continues to rise even after removing the effects of inflation, almost doubling on a constant dollar basis in the last 10 years (Source: Wikipedia).

The American Empire in Decline

All good things come to an end. — Anonymous

I believe that the U.S. is an empire at the peak of its power, peering over the edge at a potentially precipitous drop ahead.  They are beginning to exhibit many of the symptoms of an empire in decline.

The U.S. has severe economic problems.  Some of these challenges may be short-lived, but others appear to be more structural and could have lasting impacts.  Despite repeated economic stimuli (e.g. bank and auto industry bailouts, near zero interest rates, multiple rounds of quantitative easing, tax breaks to home owners), the U.S. economy is limping along.  The U.S. currently has historically high unemployment, partly as a result of the continued trends of offshoring and automation.  The gap between rich and poor continues to widen.  Over 20% of U.S. home owners are ‘under water’ on their mortgage, meaning that they owe more than their homes are worth.  They have high and growing levels of personal debt and almost 1 in 6 Americans rely on government food stamps to ensure they have enough to eat. The U.S. budget has a huge annual deficit which continues to add to its massive national debt.  The government appears paralyzed, bickering over irrelevant matters while the nation suffers.  They’re spending their time rearranging the deck chairs while the Titanic sinks.

Can the U.S. halt its decline?

The U.S. possesses a lot of assets that may be able to help postpone or slow its decline.  They have the largest economy and most powerful military in the world (many times larger than any other country).  As a result they have tremendous economic and political influence globally.  Through media conglomerates and Hollywood, they also have great cultural influence.  The U.S. dollar is the primary reserve currency for world banks, which affords it benefits it would not otherwise be entitled to, and the U.S. continues to be a world leader in research and in technology.

Most importantly, the U.S. has a record of re-inventing itself, allowing it to overcome virtually all important challenges to-date. Their notion of American Exceptionalism results in a confidence and ‘can do’ attitude that is hard to beat.  Will this be enough to overcome the apparent economic, political, and cultural decay they’re experiencing?  It remains to be seen.  If not, what will happen to Canada in the long term if our primary ally and partner in virtually everything loses it privileged position in the world?

As with any sustained and repetitive activity of reasonable complexity, traveling tends to have its minor annoyances. We prefer to look at these as challenges rather than problems, but they can become irritating, especially when our energy, and therefore tolerance, is low or our frustration level high. One of the biggest challenges with sustained traveling is to not become cynical. It is easy to develop a ‘been there done that’ attitude, and to become critical of things that we don’t have to deal with at home. We try hard not to do this, and instead try to maintain a positive attitude and find the humour in the day-to-day challenges we face. In that spirit, here are some of the things that we deal with on a regular basis in India, many of which we also experienced elsewhere.

We hope that didn’t sound too negative. We take it all with a grain of salt, and these challenges are greatly outweighed by the benefits of traveling. These issues are quickly forgotten when we meet special people, are offered unsolicited assistance from a local person, or witness something amazing. They all contribute to the experience, and in part, help to make it interesting.