We recently returned from a trip to Arizona.  Our main goal was to visit family, Canadian ‘snowbirds’ who spend part of the winter in this warm southern state situated between California and Texas on the Mexican border.  It was our first visit to Arizona, and we’d heard a lot about it.  It is a popular place for Canadians to visit during the winter when the average temperature there are 25 to 45°C warmer than in Canada.  Additionally, Arizona is dry (mostly desert), and we had rain only one time (at night) during the 3 weeks that we were there!

We drove from Vancouver, British Columbia to Phoenix, Arizona in 2 long days (13 hours of driving each day).  We’d recommend making the trip in 3 or 4 days instead, which makes it much more civilized.

We spent our time in the Phoenix area, including two of its surrounding communities (Scottsdale and Apache Junction).  Although this region is mostly flat desert, small rocky hills dot the landscape, making for good walking and hiking.  We hiked over Pinnacle Peak three times during our visit, a great fitness walk taking about an hour.  It’s not as tough as the Grouse Grind (a popular fitness hike near Vancouver), but equally popular and with all ages of people. 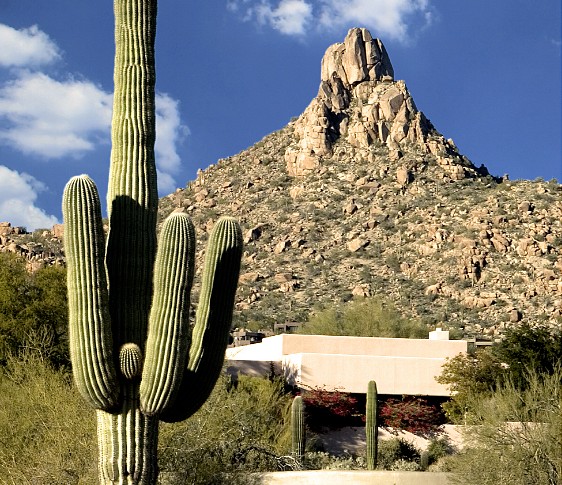 We also did some mountain biking in McDowell Mountain Regional Park.  The terrain is generally flat (at least when compared to British Columbia mountain biking terrain), but it does have small variations including rocky rises and sandy washes.  It’s important to stick to the trails to protect the desert and one’s bike tires, which don’t last long otherwise due to the cactus needles that litter the ground.  Most mountain bikers in Arizona ride with tubeless tires that contain a gel that makes them self-healing to generally avoid (or minimize) this challenge.

While in Arizona, we attended an NHL hockey game.  The Phoenix Coyotes were hosting the Vancouver Canucks at their (LINK Jobing.com) arena.  Aren’t these corporately sponsored arena names inspiring?  It appears that the strategy is working though, as I’ve just called attention to their brand, and I bet that at least one of you is going to look it up to see what they do.  I did.

Diane and I arrived 5 hours before the 7 PM game time, which is a bit too early, even for Canadians, but we were not the first Canuck fans there.  An added benefit of arriving early was that we got to park in the media parking lot for free, although there seemed to be plenty of other free parking at the Arizona Cardinals’ University of Phoenix football stadium across the street.  We settled down at a western restaurant and bar in the Glendale Entertainment District just outside the arena to enjoy some BBQ ribs and beverages.  It was great that even in middle of ‘winter’ we could sit outside with just a light jacket on. 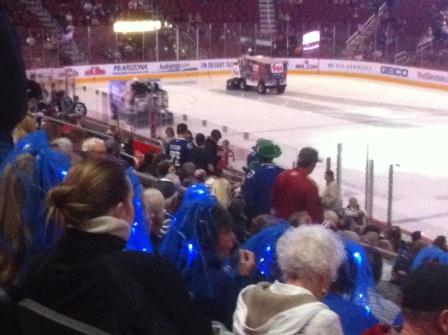 The crowd seemed to contain far more Canuck fans than Coyote supporters.  It was a sea of blue and white Canucks’ jerseys everywhere.  And not just snowbirds, but all ages of Canuck fans, some of who may even have traveled down just for this game.  Unfortunately Vancouver lost in an overtime shootout, but it was still a great evening. 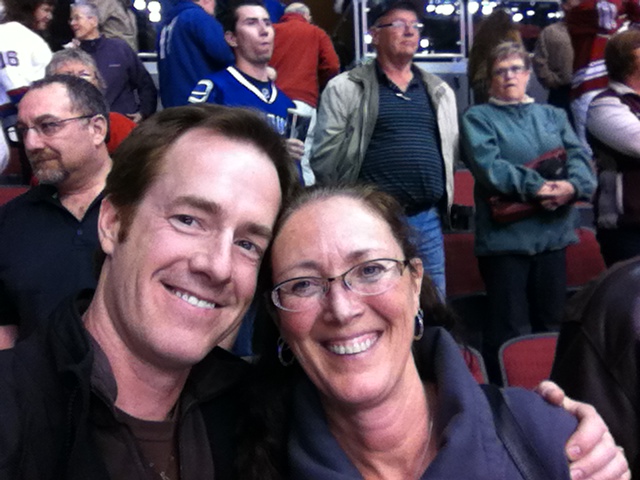 While in Arizona we also visited Diane’s aunt and uncle and my cousin and his wife, both of whom have places in mobile home parks (aka ‘trailer parks’).  These are extremely popular with snowbirds as they provide reasonably priced accommodation with low maintenance in an active community of like-minded seniors.  The mobile homes are single (about 400 sq. feet) or double wide, depending on lot sizes and park regulations, and the newest ones are rather nice homes, indistinguishable from the interior or exterior from something built in-situ. 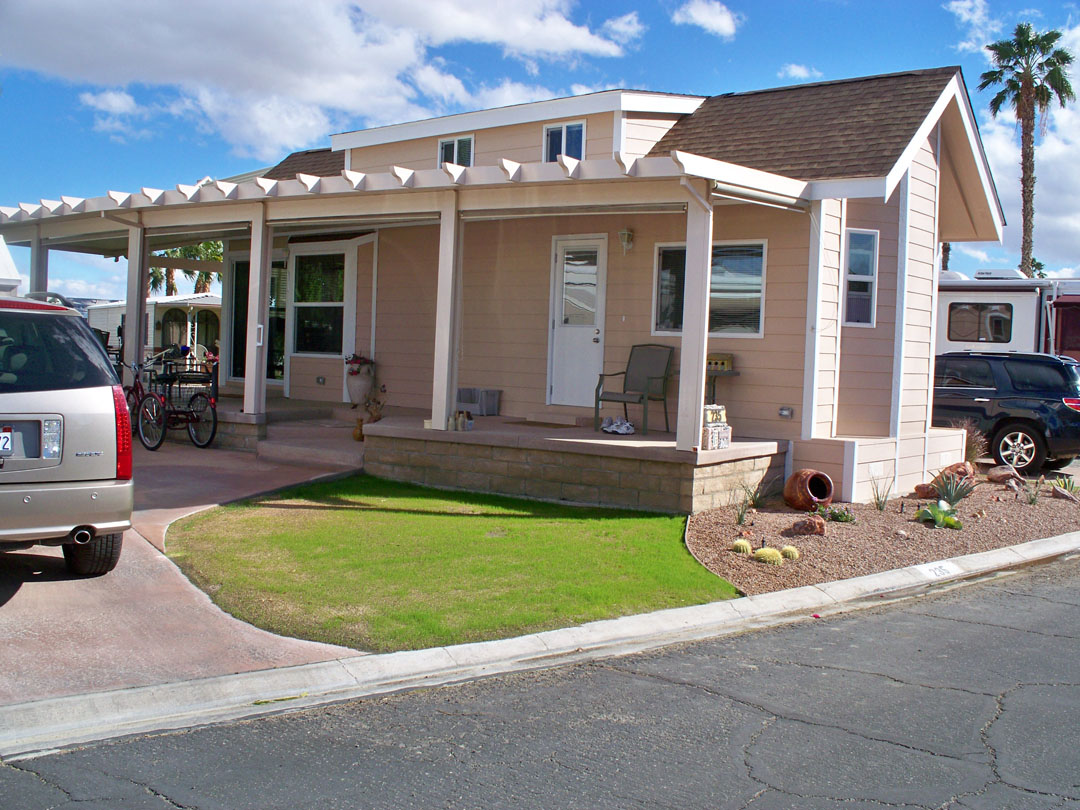 They are located on palm-lined streets in gated communities that offer a smorgasbord of activities for seniors.  Diane’s uncle Ernie plays on 2 softball teams and Patrick’s cousin Jeff golfs several times a week.  Some residents (and guests!) enjoy hiking, beach volleyball, or driving dune buggies and quads in the desert.  Each day there are literally 50 or more organized activities to partake in – tennis, pickle ball, and shuffleboard leagues, a batting cage and driving range, water aerobics, pottery, ceramics, lapidary, lots of card playing clubs, and many more.  There are also many informal activities like a library and several pools and hot tubs.

Most importantly, trailer parks seem to provide a great social environment for seniors.  There are people walking or cycling around the park constantly, resulting in conversations or informal visits from friends perhaps 5 or more times a day.  You always need to keep the kettle on.  It’s really tough to get any work done with so much visiting going on.  There is a happy hour at someone’s home almost every night.  In addition, there are dances and parties a couple of nights a week.  Once each season (which runs from October to March), the people from each state or province arrange their own party (grouping together if they don’t have the numbers, e.g. Western Canada), and there most streets in the park also arrange a block party.

A unique social phenomenon that I observed is that of ‘bobbing’.  Each afternoon, many seniors drive over to a nearby pool in their golf carts, the preferred form of transport in the parks.  They don visor and sun glasses and sit on pool noodles (the long foamy things) while bobbing in a circle to enjoy hours of conversation.  People arrive as singles or as couples, and everyone seems to be welcome.  They beat the heat of the afternoon while spending quality time with others!

Thank-you very much to the family and friends who hosted us during our visit.  We enjoyed our trip to Arizona immensely.  A great place for a winter getaway!