We continue to head east across Germany.  After nights spent beside a fire hall near Frankfurt am Main and in a parking area in Erfurt, a town that we enjoyed last year despite the hubbub caused by the Pope’s planned arrival the following day, we stopped in a small village in Saxony named Zschaitz.  After 10 days of rain in France and Luxembourg, spring had arrived with a vengeance, and the previous couple of days were in the high 20’s Celcius.  My hayfever was also in full swing.

Our camping guide book (the Bord Atlas which is written only in German!) showed that there was a camping place for motorhomes with electricity and a reasonable price only a few kilometers from the motorway.  Although we couldn’t read the description, the picture showed a small lake (which turned out to be a reservoir), which appealed to Diane so we wandered off to the beautiful village of Zschaitz.

When we arrived, the party was just getting started. There were about 20 people gathered around a large fire that was being lit.  We approached the group and were directed to the ‘chef” (the German word for ‘chief’) who was brandishing a large pitchfork.  He spoke to us in German and we gave our standard response, “Sprechen Sie Englisch?” or “Do you speak English” which usually prompts a little smile.  He called out to the group to see who could speak English and we were approached by a nice guy whose name we later learned was “Haiko” (I hope that I’m spelling the names correctly, because they’ll probably be reading this!) 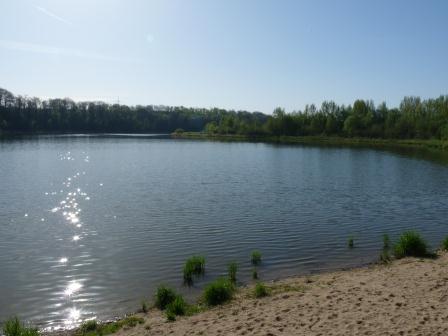 Haiko helped us find our parking pace in a gravel lot right beside the reservoir.  We were the only camper there.  Nice.  His son Kevin brought the key for the bathroom (it didn’t work but they solved that later).  We walked back with them to the party, which was near the place where the duschen (showers) are located.  Upon completing our tour, we stood talking with Haiko and Kevin on the outskirts of the party.  After a while, the ‘chef’ called out to Haiko to offer us a beer, a flavourful brew in a bottle with a flip-top cap that Diane really enjoyed.  We told them about our trip.  We learned about Haiko’s service in the German military and met his wife Janet.  We talked about Zschaitz.  We spoke briefly with several other brave people from the party who came up to us and said hello, though in most cases their English was limited.  Haiko’s English was pretty good (he called it ‘military English’) and Kevin’s seemed good also, far beyond what I would have expected of his 14 years.

We thanked them for the beer and returned to the camper where Diane made dinner.  Just after we finished, a friendly older gentleman that we had met at the party arrived with several kids in tow.  He spoke virtually no English, but came anyhow with his grandchildren to deliver us plastic glasses of ‘Jim Bean und Coke’, English words that he did know.  Here we also met Kevin’s sister Chantelle who is 11.

We returned to the party together, and enjoyed a great evening around the fire.  People were sitting on wooden pallets covered with old carpet or blankets.  They were drinking beer for the most part, but also brandy and Eierlikoer (egg liqueur), a homemade beverage of alcohol, milk, powdered sugar, and raw egg yolks (hopefully the alcohol kills the salmonella).  The Eierlikoer was served in small edible glasses (yes, edible) that tasted like ice-cream cones.  We’d brought our own beer, but they kept offering us shots of other things which we, as good guests, graciously accepted.

We really enjoyed talking with Chantelle, Kevin, and Haiko.  Chantelle asked all kinds of questions of Diane.  What are your hobbies?  What are you good at?  Bad at?  What is your favourite food?  Favourite movies?  Do you like ‘Twilight’? 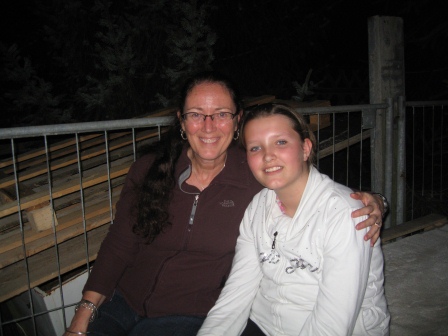 I spoke with Haiko about the military and his travels, and about the people at the party, some of whom got braver with their English as the night went on.  Kevin told me about his football team, and I learned that they were playing a match the following morning against another village.  He invited us to the game and we were very pleased to accept.  This was one of those moments that as travelers we long for.  A chance to meet local people and, despite the language barrier, get the chance to learn about them and share with them. 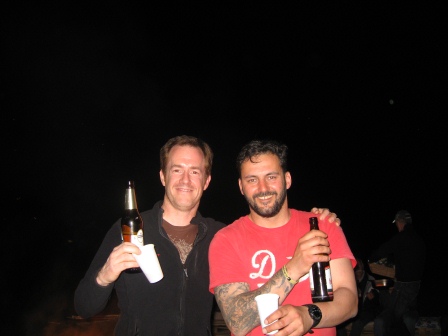 When Chantelle when to bed, she offered Diane a charm she had made herself.  As other people left the party, they came and shook everyone’s hands, including ours, offering the informal good-bye ‘tschüss’.  We agreed to meet Haiko and Janet in front of their home the following morning at 10:20, 10 minutes before the start of Kevin’s soccer game.  Haiko seemed very glad that we had shown such an interest in his children.  Then we too drifted off to bed. 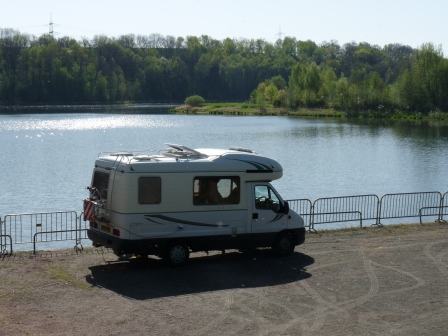 Our great parking place by the water

The next morning I ran through the village.  It was glorious and sunny and it felt great to be running, despite my minor ‘dehydration’ headache from the night before.  I shaved beside the lake watching my reflection in the window glass.  We packed up the camper van and arrived at Haiko’s home as promised.  He and Janet jumped into the RV and we drove the 500 meters to the village’s soccer field.  Kevin was already there with his team and ran over to say hello during the warm-up.  We sat at a picnic table with Kevin, Janet, Chantelle and her best friend (isn’t it great to be 11?)  We drank tea, coffee from the clubhouse, and Haiko and his brother-in-law also drank beer.  It’s not uncommon to drink beer or wine in the mid to late morning in Europe, especially on the weekends. 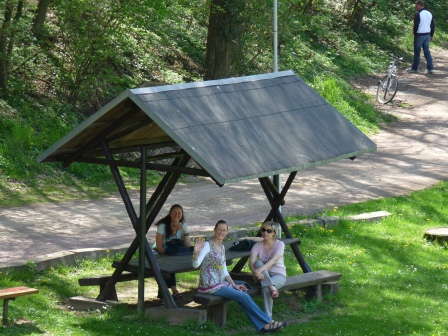 Diane and Janet watching the game

The game didn’t go so well for Kevin’s team.  The other team, number 1 in the league, was bigger, strong, and faster.  But the Zschatiz home team played well and kept trying even when they were down. 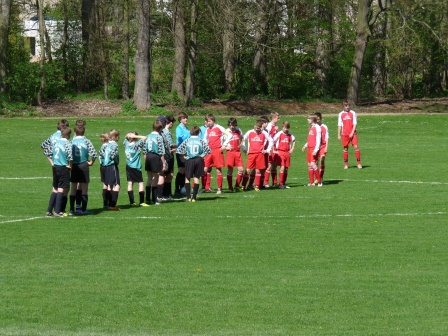 The opposing teams meet at midfield.  Zschaitz is in green and Kevin is #2.

We enjoyed the game a lot, and Haiko gave me a tour of the clubhouse afterwards.  It was filled with pictures and trophies of the village’s soccer club from years gone by, including important matches and visits by famous teams.  Haiko pointed out his father in one of the pictures. 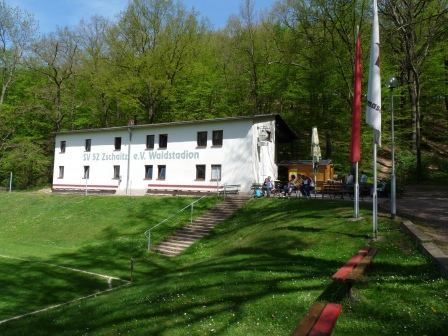 Kevin joined us after the game and we walked back towards the camper to say our good-byes. He told me that he’d already been reading our blog (I’d given him the address the previous night). With his parents’ permission, I told Kevin that I would write a story about our visit and his soccer match and post it on the blog.  Thank-you so much to Kevin, Chantelle, Janet, and Haiko.  Thanks to them, the ‘chef’, and the people of Zschaitz for making us feel welcome. 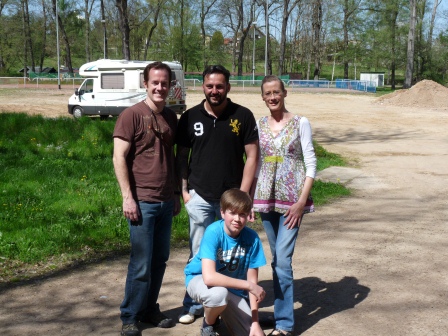 Patrick with Haiko, Janet, and Kevin