Our first two weeks in Kenya have been tough. Food is scarce, and we spend much of our time scavenging. Local food is barely palatable, and Western food is rare, even in the cities. Accomodations are basic, cramped, and noisy. We are keenly aware of the need to protect our valuables, and end up carrying most of our belongings everywhere. By the time we find food and a safe place to stay, we’re typically exhausted. NOT!

In fact, to-date, Kenya has been just the opposite. The time we’ve spend with Norma and Wayne has been rather luxurious.

When Patrick left for a quick side trip to Tanzania, Diane promptly spend all day at the spa with Norma. After her manicure, pedicure, facial, hour long full body massage, and hair wash with scalp massage, she was barely able to face another day.

In Kisumu, Diane had her hair coloured at a salon specializing in Asian and Western hair, which will allow her to face the next six weeks. 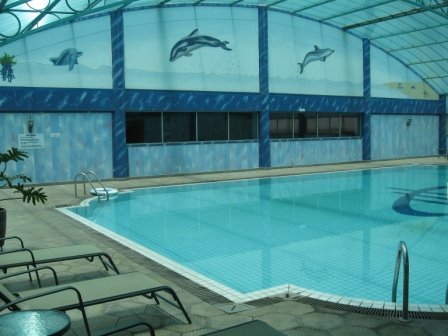 On Norma’s birthday, we went swimming at the Panari Hotel pool, followed by a light lunch in the café. Later that day, for dinner, we went to the Mediterranean restaurant, a terrific Italian restaurant in Nairobi.

We spent 2 days at the Lion Hill Lodge in Nakura National Park. We stayed in individual chalets, with floor to ceiling mosquito nets around king sized beds — very romantic.

Elaborate buffet meals are served three times a day, including fresh fruit juices like passion and mango, fresh baked breads, and several varieties of grilled meat. So much for our ‘African diet’. Tea is served every afternoon, and before dinner there is a performance of traditional African dancing and drumming. 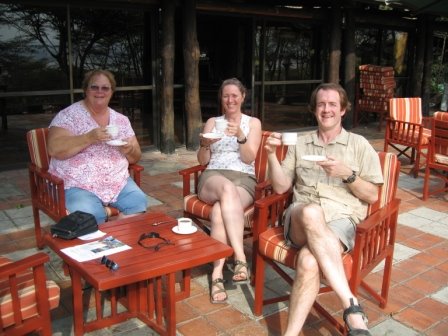 Rondo Retreat in the Kakamega Forest Reserve is set in a beautiful park-like setting in the middle of a tropical rain forest. The grounds are ornamented with trees and flowers, cared for by a staff of gardeners. Birds sing constantly from the forest, and Blue and Colubus monkeys visit every afternoon around tea time. At sunset, the crickets and frogs sing in a riotous chorus. Lunch, tea, and supper are served at 1PM, 4PM, and 7PM respectively, in the British style.

Other than these hardships, things have been manageable in Kenya.

We went for lunch in Kisumu, the town where Norma and Wayne used to live, before they left Kenya temporarily to avoid the violence that followed the last national election. The guide book says that the fish restaurants at the foot of Kisumu’s main street, on the shores of Lake Victoria are considered one of the top five dining experiences in Kenya.

Just driving to the place is an experience. The dirt road that leads from the end of the pavement, over the railway tracks, and down to the shanties along the lake is lined with people trying to make a buck from the steady flow of people who come to eat fish. We parked on the grass between the lake and the tin roofs held aloft on poles that comprise the restaurants, despite the objections of the many people who tried to direct us elsewhere. 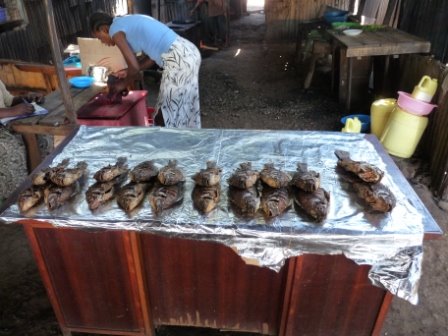 There is only one meal served at all of these restaurants, hence there is no need for menus. We walked up to a small table, which divides the cooking area from the eating area, selected our fish, then returned to the plastic patio furniture where patrons sit carefully balanced on the sloping dirt floor. 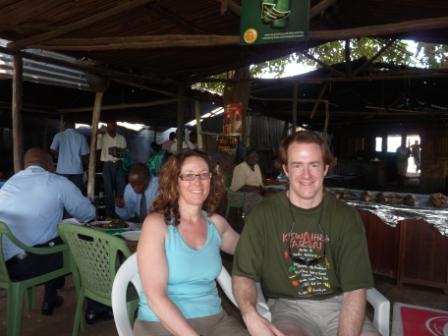 In a few minutes, a woman arrives with a plastic jug and a dish pan containing a small bar of soap. She pours warm water from the jug over our hands while we wash in the basin before eating. The dining experience is enhanced by a steady stream of hawkers who come to the table trying to sell just about anything that can be carried – CDs, belts, hats, sunglasses, locks, tools, etc.

The food arrives quickly. It includes a whole tilapia from Lake Victoria, complete with head and fins, covered with ‘skumawiki’, a green vegetable dish made with something approximating kale or spinach. Skumawiki means “push the weak” in Swahili, because it is cheap enough that the poor can get by eating it until they get some money. The skuma and fish are cooked together in a large curved pan over a fire, with oil, onions, a bit of tomato, and cilantro. Accompanying the main dish is ‘ugali’, a Kenyan staple made of maize flour and water.

The meal is consumed with the right hand by breaking off a piece of ugali, rolling it into a ball, then making a depression in it and flattening it with the thumb against the forefingers. This is then used as pincers and finger protectors to pick up the hot skuma and pull the even hotter fish meat from the bones. The meal was amazing. One of the best fish dishes we’ve ever tasted The next time you’re passing through Kisumu, I highly recommend it. And a bargain too, at about $7 Canadian for the two of us.

After washing our hands again, and paying the bill, we walked back to the car. We had decided against having it washed while we ate, which is common, but not environmentally friendly. The washers just back the vehicles, of all shapes and sizes, into the lake to clean them.

We had with us some leftover food from the previous day’s lunch in a white cardboard box. Wayne’s intention was to give it to the street boys who hang around the restaurants looking for handouts. These boys are homeless, and in most cases without parents due to HIV/AIDS. In other cases, after their father died, their mother became an additional wife of their father’s brother, who then cast out the boys to avoid any competition for inheritance with his own offspring. As a result, they wander the streets looking for food and begging for money, which they use to buy glue. The glue is squirted into small plastic bottles which they hold in their front teeth, so as to constantly inhale the fumes. They have glue residue caked on their noses. Their eyes never seem to focus. 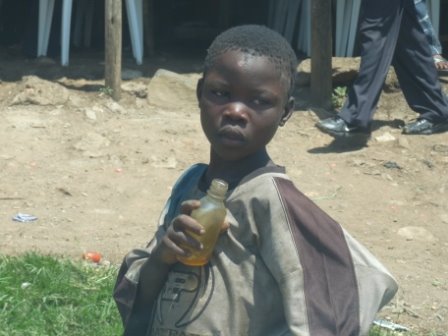 Wayne handed the box, which contained a few cooked potatoes, boiled eggs, day old cheese sandwiches, and apples, to the oldest boy, with instructions for him to share it among them. He nodded affirmatively, holding the box high and stepping away from the car.

He was then set upon by the other boys, who forced the older boy and the box to the ground, and fought for the contents in a pile. Other boys appeared out of nowhere to join the scramble. Within thirty seconds, everything had disappeared, and the boys returned to our car seeking more. 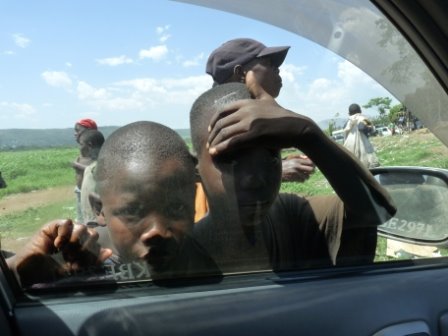 We had since started the car, and were backing away, but became stuck in some soft ground. The boys surrounded the car. Wayne spun the tires, but we weren’t going anywhere. He tried rocking back further, but that didn’t work.

Diane and Patrick weren’t sure what was going to happen next, but then, all the boys started to push the car, and we were quickly underway.

Just another meal in paradise.