Petra is an ancient city of caves, carved into the sandstone by the Nabataean people about 2000 years ago. It covers a huge area, and is truly remarkable. It has the most amazing rock and rock sculptures I’ve ever seen. 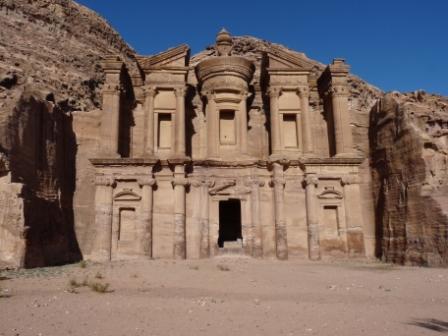 After spending the first day walking around the site in awe and climbing two mountains, we decided to use our second day to try a new route which had been recommended to us by a couple we met in Egypt. We didn’t know what to expect, but Patrick was excited to check it out. We were hiking with a British couple that we met two days earlier. Martin is a retired fire fighter, and both he and Susan are rock climbers.

As we started out on our journey down a side canyon, a local person tried to tell us that we were going the wrong way. Then the tourist police yelled at us from the cliff above and advised us that the way was closed, was not safe, that there was a lot of water, and that other tourists had much difficulty going this way. After a lengthy debate, where it became apparent that we weren’t giving up, they let us proceed. A general rule of thumb in the third world is that if someone tells you that you can’t do something, keep trying and they’ll stop you only if it is truly forbidden. Many of the ‘rules’ are actually guidelines, or someone trying to cover their butts.

The entry to the route was through a large tunnel, carved through the rock by water over the millennia. The route is susceptible to flash flooding, but there hadn’t been any moisture for a few days. The four of us continued down the gradually narrowing canyon, which required route finding and negotiation of large and small rocks. 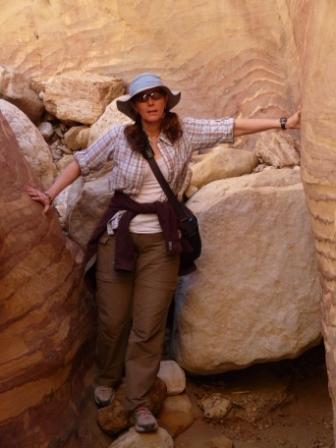 The first section of the canyon was not too tough, but as we traveled further along, the route became much more challenging. The walls narrowed to just a few feet apart, and the bottom of the canyon was filled with pools of ever increasing depth. The three rock climbers in the group found the journey quite exciting and even exhilarating, I questioned why on earth I was doing this. This was about the time when Patrick joked with Martin and Susan that it was a good thing that the two of them were with us, or Diane would be really giving him a hard time about the choice of route. 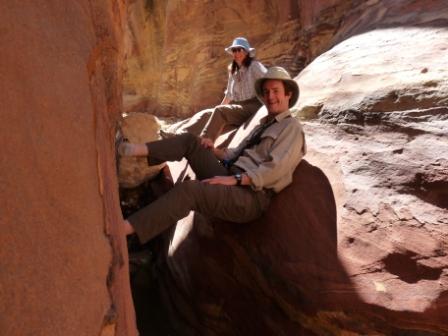 The narrowing of the canyon and the water in the floor of the canyon continued to increase. To avoid wading through the water, we used “foot back chimney” rock climbing moves on the canyon walls, and of course the climbers thought this was great.

After traveling down the canyon for about ninety minutes we came to the really “interesting” part of the journey. This was when the walls of the canyon were far enough apart that the chimney moves would only work for those of us in the group with long legs. Patrick went first, carrying both of our bags and cameras, to confirm the best approach, and to ensure the passage was viable. I went next. At the start all was well, however it was short lived as the canyon walls became farther apart. Verbal instruction from the group was plentiful.

I was suspended between the canyon walls, about four feet above water of unknown depth and questionable purity. This was when the climbing phenomenon known as the “Elvis leg” came into play, accompanied by a few choice words beginning with “F”, a scream and a splash into the water. Fortunately Martin quickly employed his fire fighter rescue moves and helped me out of the water. Patrick, on the other hand, captured the event on film for your viewing pleasure. 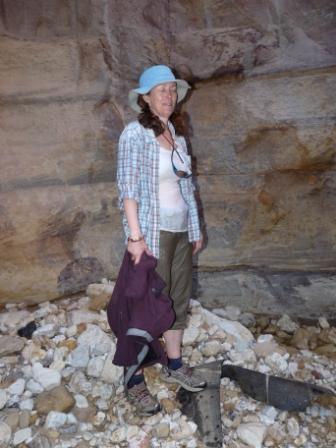 When I got out of the water, I found that we were in a small chamber carved into the canyon walls. This route was pioneered over 2000 years ago, and was a sacred placed for the Nabataeans. 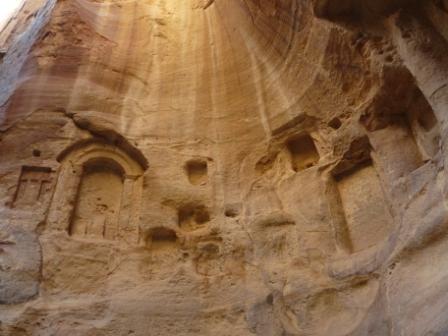 I was relieved that it was only a short distance from the end of the slot canyon, and we were able to dry off in the warm sun before continuing our exploration of Petra.