On our flight from London to Mumbai on Qatar Airways, we had a short stopover in Doha, the capital city of Qatar. The airport is basically a transfer station for those flying elsewhere, but it had an amazing duty free shop selling both the full suite of luxury goods, and curiously, large bags of powdered milk which were a hot seller.

On the second leg of our journey, after some delays in check-in, we were given a complementary upgrade to first class, much to our surprise. Many others in line with us didn’t receive this. We wondered whether it was because we were only white people in economy. After an eternity spent in a bus waiting to board the plane in the evening heat, and being delivered to the rear entrance of the plane (when we were sitting in the very first row), we finally made it to our seats. Neither of us had flown first class before, and we were pleasantly surprised.

After selecting our before dinner cocktails (a bloody mary and a martini), we reviewed the menu to select our appetizers and entrées. We both had the trout pate, which was presented with a variety of accoutrements. Patrick had the fish and Diane the chicken. The meals were served by course on hot white china plates, with real metal cutlery (can’t first class passengers be hijackers too?), with a fine selection of mid-2000 vintage French wines.

After his second martini, Patrick was really enjoying himself. Especially the large screen individual audio visual system with a remote control and active headphones (which counteract any ambient noise by playing compensating frequencies). Unfortunately Diane’s screen wouldn’t work, but we both enjoyed the adjustable powered seats that had at least fifteen separate adjustments on a separate remote control.

Regrettably, this was only a three hour flight, the shorter portion of our journey from London, but it was a great way to get to India. 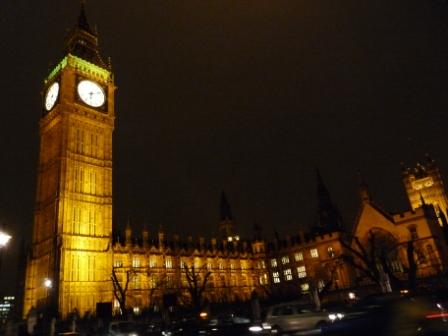 We’ll enough about our preparations…

We spent our first day in London with Natasha Koroluk, Patrick’s cousin’s daughter (first cousin once removed). She was a terrific host, who met us at the airport, got us to our hotel, and led us around for the first day. This helped to familiarize us with ‘the tube’ (London’s subway), british money, etc.

We’ve been in London for 3 ½ days, and things are going really well. Patrick read somewhere that a travel blog should not be an exhaustive description of all the things you’ve done, so here’s a short list, followed by some totally disconnected observations.
· Trafalgar Square
· British Museum
· Tate Modern
· National Galllery
· The Tower Bridge
· St. Paul’s Cathedral
· The Tower of London
· Westminster Abbey
· London Theatre – the musical “We will rock you”.

It reads like a Top 10 (well a top 9 so far) of London’s tourist attractions, and we’ve enjoyed every minute of it. In particular, St. Paul’s, The Tower of London, and Westminster Abbey are truly amazing. The history is so tangible, we can feel it. It seems more alive, more within our grasp. For example, today at Westminster Abbey, we saw the grave of Charles Dickens. On it were flesh flowers, with a card that read “On your 197th birthday, from the more than 100 living descendants of Charles Dickens”. How cool is that! Unfortunately we were not able to take pictures inside the church to share with you. Although Westminster was truly amazing it was also a bit creepy with all the people buried in the cathedral. Diane isn’t fond of walking of graves, but they’re everywhere, so you can’t help it.

When we were walking to the National Gallery, we saw a red helicopter circling low. As we approached, we saw people running. Diane, of course, wanted to head the other way, whereas Patrick wanted to get closer and see what it was about. Patrick was thinking “Oh, isn’t this exciting”, and Diane was thinking “Oh my god, is this a terrorist attack?”. It turned out that it was a medical emergency, and that Trafalgar square is actually an alternate landing place for medical transports.

At the British Museum, we spent time in the Egyptian wing, which has impressive examples of Egyptian artifacts, which were ‘obtained’ by England during the days of the British Empire. We hoped to learn a bit about what we’ll be seeing next week in Egypt.

There is a legend at the Tower of London, that if the “Blacka Chickens’ (aka Ravens) ever leave the tower, that the monarchy will break down (http://www.historic-uk.com/DestinationsUK/TowerRavens.htm). 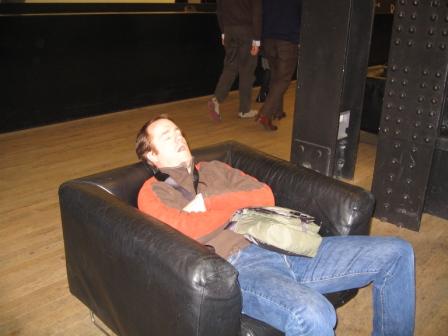 Here is Patrick working on his jet lag at the Tate Modern.

The weather has been very cool, averaging a few degrees above zero (Celcius) during the day time, with a mix of rain, cloud, and a few bits of sun. With a wind chill of a few degrees, our safari clothes (when worn all at once) are just cutting it. Unfortuntely, the cathedrals are only a few degrees warmer than outside. After a day of viewing today, we just needed to sit in front of a big fire at the pub, have a couple of pints to warm up, and post this note. Diane must have been really cold, as she needed 2 ½ pints!

The English national team is playing Spain tonight, and the game is just getting underway. The pub is filling up with ‘football’ fans, and we’re looking forward to a great game. David Beckham may be playing. If so, he will have tied for the greatest number of games played for England!

And for you Anglophiles, here’s one more picture (Diane in front of St. Paul’s Cathedral) 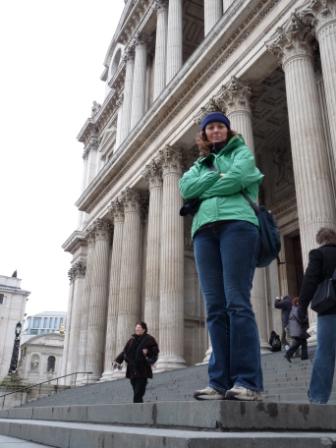