Today is Yom Al-gu-m’a, or Friday in English, the weekly Muslim holy day. The mosques peal five times each day, the first before sunrise, and the last well after sunset, but on Fridays at around noon they also broadcast their ‘sermons’ over the loudspeakers. We’re getting used to it, and I’m sure it would be very interesting if we spoke Arabic. The location relative to the street and the nearest mosque are essential criteria when evaluating a hotel room in Egypt.

We’re writing this from seats 19 and 20 on the bus to Dahab Egypt. A mere 20 hours from now, around noon tomorrow, we’ll have driven under the Suez canal, crossed the Sinai peninsula, and we’ll be in a relaxing seaside community on the Gulf of Aqaba, near the Red Sea.

We’ve been in Luxor for the last 3 days, visiting the ancient tombs and temples of Egyptian royalty and gods. In pharaoenic times Luxor was called Thebes, and the history here is amazing. It makes England’s long history seem like the recent past. Almost all of the monuments we saw were about 3500 years old, the complex construction and artistry of which is still truly impressive today. 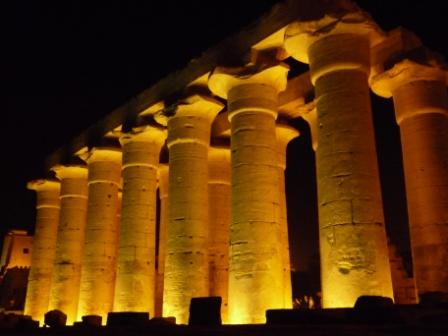 Yesterday was a great day. We got up early, took a ferry across the Nile to the west bank, and negotiated a taxi ride to the Valley of the Kings. Here, the tombs of sixty-three pharaohs have been discovered so far. Some have been open since antiquity, and contain Roman graffiti that is 2000 years old. The most famous of these is King Tutankhamen’s tomb, which was discovered by Howard Carter in 1922. This was the last tomb found in the Valley of the Kings until 1995, when a large new tomb was discovered. Exploration and excavation of the valley continues to this day.

We visited the tombs of 3 pharaohs — Ramses IV, Tuthmosis III, and Tawosret/Sethnakht. Each tomb goes deep underground or into the base of the cliffs, contains many rooms and passageways, and is decorated with carvings and paintings. Some still contain the stone sarcophagus of the original occupant. 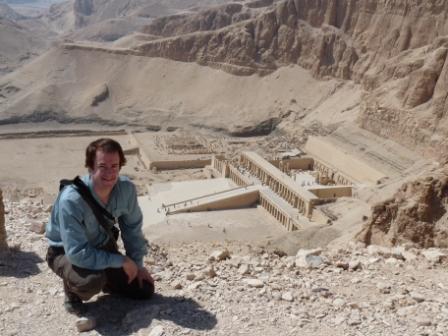 Afterwards, we hiked out of the valley, and walked to Deir al-Bahri where the temple of Hatshepsut is located. A steep trail, though not as steep as the Grouse Grind, led upwards for about 20 minutes, where we reached a ridge with a spectacular view over ancient Thebes and the temples below.

Later that afternoon, we were invited for dinner to the house of a young Egyptian man named Ahmad Ali, whom we met in his shop when we stopped to buy water. We’ve experienced Egyptian hospitality twice on this trip. The first time was in Aswan, when we met a nice man of about fifty-five named Mahmoud, who every evening sat outside the barber shop of a friend, and engaged us to practice his English. We visited with him twice, helping him with his already impressive English vocabulary, and he in turn, teaching Patrick some basic Arabic.

We had our hotel manager go with us to buy some Egyptian sweets, which we took to Ahmad Ali’s house as a gift. His family’s home was an old four story building, with a dark staircase and small rooms. We were met on the stoop by his father’s mother, who he insisted on referring to as ‘grand-father’. Ahmad Ali took us first to the roof top to proudly show us his goats and chickens. Included in the small herd of goats were two newborns a couple of days old, and a pregnant female who, after he checked her privates, he said would delivery tomorrow ‘en shalla’ (god willing), He was surprised to learn that we did not have any goats, chickens, or cows.

Ahmad Ali and his entire family live together. We met his two sisters, mother Saida, his nephew Hussein, and niece Jasmine. When asked how long his family had lived in the house, he didn’t seem to understand the question. He talked about his grandfather, but I think he didn’t know because it had been in his family longer than anyone can remember.

Ahmad Ali’s sisters and mother made us a fabulous traditional Egyptian dinner of salad, rice, fuul (a cooked bean dish something like refried beans) roasted chicken, and two kinds of bread. They set us a communal table on the living on the floor and Ahmad Ali sat with us and ate dinner. The ladies did not join us until later for tea. Ahmad ate with gusto, and talked with his mouth full. I think he said that he only eats one meal each day. Diane, a lefty, had to stay conscious to remember to use her right hand only.

Over tea, we talked with Ahmad Ali’s sister who knew some English and was interested in learning more. She sat with Patrick looking at the Lonely Planet guide book’s Arabic language section. Patrick continued to develop his ‘shoia-shoia’ (little bit) of Arabic and she practiced her English. Meanwhile her 2 year old daughter Jasmine, who was quiet shy, was doing everything she could not to not let us see her look at either one of us. After many friendly smiles Jasmine and Diane played a game of peak-a-boo. Before the evening was over Jasmine had warmed up to us and even shook our hands good-bye. 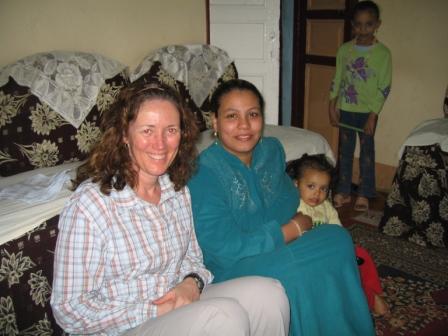 Ahmad and his family were extremely gracious, showing us true Egyptian hospitality. It was an amazing experience. We hope that if we have the opportunity to show the same kind of hospitality to travelers to Canada that we will do the same. How many Canadians would invite total strangers to their home for dinner?