The following is a guest post from Martin of the S&M Motel.  Thank-you Martin!  This is also the first guest post on DreamBigLiveBoldly.com.  If you’d like to be a guest contributor, please contact me.

We are temporary inhabitants of the S&M Motel and I have so enjoyed the blogs from Patrick that I thought I would let you know what’s going on in Spain as the festive season approaches.

Like most places in the world with a Christian tradition, the towns and cities of Spain are becoming illuminated with decorations. Abstract swirly things suspended from lampposts, LED animals tethered to the roadside verges, along with traditional Christian and secular symbols (e.g. stockings, Santas and sleigh bells).  Nothing unusual there.

However. there is a tradition in Spain of building and displaying Beléns (Belén is Spanish for Bethlehem).  They look like an expanded version of a nativity scene. Their central focus is a tableau of the stable and its inhabitants, but from there the scene expands in time and space. Scenes depicting Gabriel telling Mary she was expecting, Herod’s edict to slaughter the innocents, the flight to Egypt, and Jesus at the temple are all somehow woven into a kitsch cardboard and plastic, seemingly fairly inflammable, toy town construction.

Municipalities compete for the grandest Belén.  In Malaga the city hall is open to the public.  Their 10 metre long Belén, guarded by the police, is admired by streams of people filing in to admire the display. This is not just for kids.  The crowds include courting couples, businessmen, and elderly people, photographing and discussing the arrangement of the little town (literally) of Bethlehem. 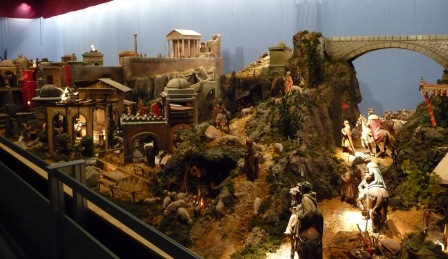 Beléns are big business.  Every home should have one. Stalls sell figurines, prefabricated stables, watermills, bushes, trees, and anything else you can imagine (and some you can’t) to build a mega model nativity. The most bizarre figure we saw for sale was a Boxcar Willy lookalike on a rocking chair peeling an orange. There are grown men out at night hunting through hundreds of shepherds, Marys, baby Jesuses, camels, wise men, and carpentry shops for the perfect addition to their own private Beléns. 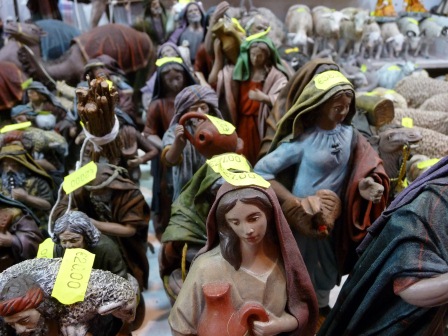 The other odd thing about continental European festivals — I make the distinction because we are from a bit of Europe that happens not to be on the continent — is the liberal detonation by children of street fireworks. I don’t know what happens in Canada, but in the old country one has to hold a special licence, have a safe piece of ground separated from the public, and have a damn good reason to let off any pyrotechnic device, let alone the cheap Chinese ones thrown around by the children of the continent.

These things (the fireworks not the children) are for sale from street market stalls that also sell other festive novelties, for example, father Christmas costumes for dogs, fake dog poo (always a crowd pleaser), and the ever popular self-inflating whoopee cushion.

Although some of these novelties are taken home and presumably treasured by generations to come, many of the fireworks are for instant use. The kids are bought bags of sweetie-looking whizzers, rockets, bangers, and buzzers (along with a novelty cigarette lighter) by doting parents and immediately set to the task of lighting and throwing them as quickly as possible. The streets are littered with discarded wrappers and spent casing. Some older people object, particularly in the case of shock or injury, but it doesn’t seem to dampen the enthusiasm for the sport among the young.

One can only wonder at the number of times that a wayward firework has resulted in the devastation of a lovingly created Belen…… still they all seem to be having a merry time, bless.

Have a safe Christmas,