There’s a niche in the corner of King Charles’ palace in Alhambra, Spain, where you can look across an 800 year old building void, through some Moorish lattice work, into another world.

In 312 AD Emperor Constantine legalised Christianity throughout the Roman Empire (i.e. most of present day Europe). By 390 AD Christianity was the only religion permitted in the empire. However, the 1000 year old empire could no longer sustain itself against external attack and internal decay.  In 476 the last Roman emperor sold his title and moved to his retirement home in what is now Split in Croatia.

The collapse of the Roman Empire left much of Western Europe without education, civil construction projects, employment, economic activity, law enforcement and, crucially, defence against attack.

One hundred years later, the tide of Islam that had been sweeping through northern Africa crossed the straits of Gibraltar into a vulnerable Spain. The invaders were ‘Moors’, relatively recently converted Muslim tribes from north Africa . They quickly occupied virtually all of Spain and stayed in charge for 700 years. 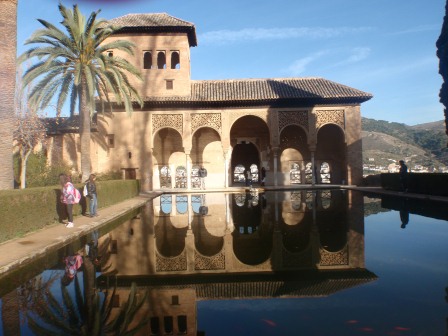 In about 1250 the Moors began to build the fabulous fortified palace, Alhambra. For 200 years the palace grew in splendour; every inch of the staterooms, private apartments and bathing complexes was decorated with intricate carving, ceramics or gold leaf. Water features were installed everywhere. The latest technology was utilized to provide stunning pools, decorative fountains and cascades woven into stairs and walkways. 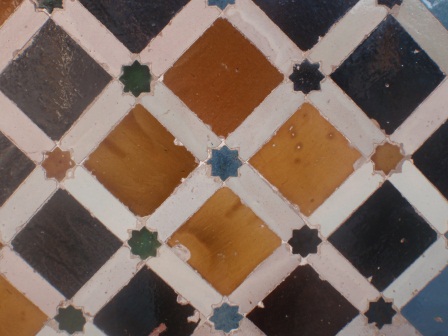 An important aspect of Islamic art is its abstract nature. Muslims avoid images of people in order to avoid creating ‘graven images’ which are forbidden by their religion. As a result, abstract patterns using bold colours and shapes decorate the walls, ceilings and floors of Alhambra. These striking and original ceramics have inspired artists down through the centuries.

The period of Muslim rule in Spain is known for tolerance and cooperation between the three religions (Islam, Judaism and Christianity). However, outside of Spain, the Christian world was not terribly happy with this state of affairs, and began to re-take Spain for their own faith.  Alhambra fell to Christian forces in 1492, ending Islamic rule over Spain.

The Catholics were now in charge at Alhambra.  The first thing the Catholic King (Charles the 5th) did was to build himself a palace within the existing complex.

Did Charles have his palace sympathetically placed among the Moorish architecture? Was he magnanimous in victory? Did he want to leave the previous palace complete for future generations to admire and learn from? Not really. He built his new palace right across the old one cutting off an entire wing, leaving just the façade of the south wing standing beside the central pool of the old Moorish palace.

In 1922 the artist M C Esher visited Alhambra and, like others before him, was inspired by the Moorish abstract ceramics. Escher’s art explores the space between objects. Characteristically he would fill a space between repeated images to form another series of repeated images, challenging the viewer with a choice of which series of objects to focus on.

A sample of Escher's work

The viewer has to decide what to look at, the primary objects or the space in between which holds a significance of its own.

Today there is an exhibition of Esher’s work installed in King Charles’ palace. In the corner of the exhibition is a niche for those inquisitive enough to duck through its darkened entrance. In the far end of the niche is a window with a view into the building void between King Charles’ palace and the rear of the surviving south façade of the old palace. Through the lattice work in the façade can be seen the sunlit grandeur of the surviving Moorish architecture.

Looking across the void prompts thoughts of the time and space between the Christian and Muslim worlds, between medieval and modern Europe — thoughts of history, power and politics. It’s an interesting place to sit.  I’d recommend it. 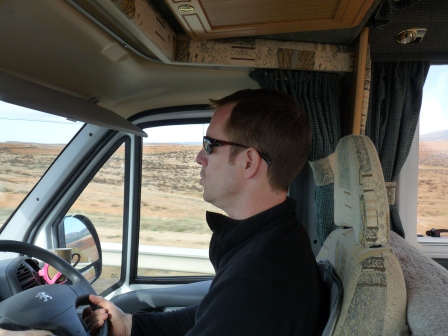 Man from Surrey tilting at Winnebagos 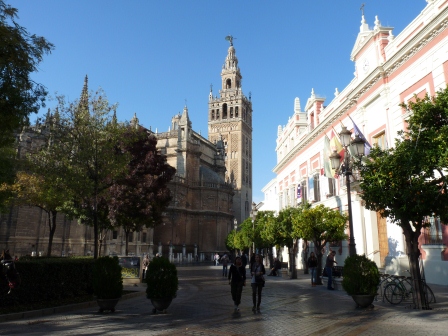 Seville Cathedral of Saint Mary of the See

Patrick fondling about $300 worth of ham