This morning there was a major eclipse in India. In parts of India it was a total eclipse, but in Delhi it was about 80%. We woke early and headed out onto the roof to watch. This eclipse was apparently special because at 6 minutes it was one of the longest, a duration that will not be matched until 2132. 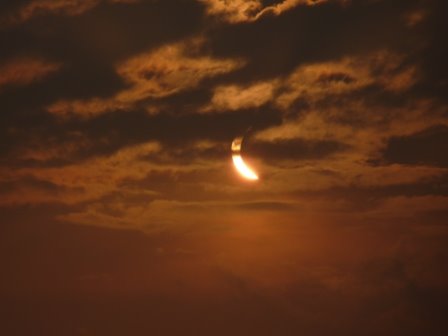 In the morning we visited the famous Red Fort (Lal Qila) in Delhi. Completed by the great Mughal emperor Shah Jahan in 1648, the same guy who built the Taj Mahal, it has been the site of many important political speeches and each year on Indian Independence Day (August 15), the Prime Minister addresses the nation from the ramparts of the fort. In preparation for that, there was a crew scrubbing the front walls of the fort. Notice the bamboo scaffolding tied with twine, and the men climbing it without any safety leashes.

After the fort, we walked around Old Delhi for a couple of hours. Old Delhi is a maze of small streets filled with shops. We had lunch at a hole-in-the-wall selling ‘paratha’, traditional fried bread served with ‘chutneys’, a variety of savory, spicy, and sweet accompaniments.

We wandered down the street into an Indian bakery and ordered something that looked like a bird’s nest, about six inches across. While Patrick was ordering, there was someone with a video camera behind the counter. Upon exiting, Diane was in discussion with a group of Indian media students, who wanted to interview us on the subject of street food. We consented to a brief interview. They asked a) what we’d eaten, b) whether we enjoyed it, and c) were we concerned about cleanliness. Our answers were a) just about everything we could find, b)) absolutely, and c) we haven’t been sick so far. However, it’s sometimes easier to enjoy our meal without seeing the kitchen or even the restaurant. Dim lighting helps. Perhaps that’s why Indians don’t eat dinner until late.

After lunch, we headed for Jama Masjid, the largest mosque in India (also built by Shah Jahan). The skies in the east were very dark, and the wind started to pick up, so we knew that rain was imminent. We had to put our sunglasses on to protect our eyes from the dust whipped up by the wind. We almost made it. The skies opened just before we reached the mosque, and we took cover under a tin shanty at the entrance. The rain was blowing sideways under our cover, and we were concerned that the roof might rip off. So we made a break up the steps in the torrent to the mosque. The water was cascading down the steps like a water fall. We arrived soaking wet, and took cover under the huge entrance archway with over 100 other people. Diane was wearing a pink tank top that she’d bought the day before, and which was by now totally soaking wet — a bit like a wet T-shirt contest, but at a mosque. We were immediately chastised for wearing our shoes, which should have been removed prior to this point, but there was no one outside to tell us that. It was probably swept away by the rain and wind. Diane put on an additional shirt that she had, one with sleeves, as quickly as possible. When the rain subsided, we toured the mosque, which was really just a vast open compound, with very little covered space. It faces West, because when you’re India, Islam’s holy city Mecca is in the West, not the East (as it is in Canada). The ground was tiled with red sandstone, which heated the rain water, creating warm puddles like bath water. Children were playing in a huge puddle, which was like a kiddy pool at an amusement park.

We’d heard that scams abound in India. Especially in the larger tourist cities, that everyone wants to take our money. This shows up in many ways. Taxi and auto-rickshaw drivers that flatly refuse to turn on their meters, and that insist on fixed fares much higher than Indian people pay. Touts that tell you the official tourist bureau or the train ticket window for foreigners is closed, so they can direct you to a private travel agency. So far, we’ve avoid all of the obvious rip-offs. The only scam we’ve experienced so far is purchasing a pair of reading glasses for 400 Rp (about $10 Canadian) that were only worth 100 Rp. Oh, and we purchased a long distance calling card for about $50 that we found out only works in Mumbai, a city that we probably won’t be going back to, but we’re not sure whether the salesman knew this or not.

India is a handkerchief haven. At home, Patrick sometimes gets grief from friends because he carries a hankie, which is seen as an old-fashioned and even slightly disgusting. With the advent of Kleenex, hankies have fallen out of favour, but they’re much softer and avoid a raw nose during hay fever season. However, in India, handkerchiefs are everywhere. Most people carry one to wipe the sweat from their brow. Due to their waning popularity in Canada, it’s difficult to purchase a quality hanky – anything softer and more absorbent than sandpaper. But in India, people on the street offer to sell us hankies several times a day. It’s just that easy. Hanky heaven. A billion people can’t be wrong.