Leaving France on our way to Spain we decided to visit the Principality of Andorra on the way. It’s a tiny, land-locked, mountainous ‘country’ surrounded by Spain except for its northern border with France. We set out from Limoux, France after a night of enjoying Blanquette and then sleeping in our van down by the river (video link).

We knew very little about Andorra beforehand (wasn’t she Samantha’s mother on ‘Bewitched’?). We vaguely knew that Andorra was in the area of the Pyrenees, a mountain range that forms the natural border between France and Spain. We naively followed the advice of our Garmin GPS, which soon had us off on a narrow track climbing the foothills of the Pyrenees. Absolutely beautiful country on a glorious sunny morning had me grinning from ear to ear and Diane squirming in her seat squeezing the arm rests because of the steep switchbacks.

We arrived at the Andorran border sooner than expected, after buying some outrageously priced diesel in a tiny village to ensure that we didn’t run out during our jaunt through the back roads. The Pyrenees unfolded before us in all their glory at the tiny ski resort of Pas del la Casa. We stopped at the tourist office and made a quick tour of the town which was busy with French people shopping despite the fact that the ski season doesn’t begin for another 3 weeks. 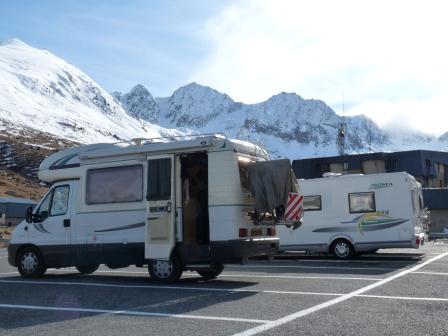 Andorra is known for two things – skiing and shopping. In the summer, you can substitute hiking for skiing and continue shopping. We think that our friends Kevin and Annette would really like it. It’s actually a very weird and interesting place.

Andorra is very small (468 square kilometers or about 5 one-hundred-thousandths of the area of Canada). but it is still larger than 5 other European micro-states (Malta, Liechtenstein, Monaco, San Marino, and Vatican City). It has a population of about 85,000 people, about a third of which are Andorran nationals, and almost as many are Spanish (source: Wikipedia). Despite its small size, diminutive population and virtually no arable land, Andorra is a prosperous country due to its tourism industry and because it is a tax haven. About 80 percent of its economy is derived from tourism, serving over 10 million visitors a year, with much of the remaining activity coming from its banking sector.

Andorra has no airports, no railways, and no ports. The only way in or out is by vehicle (or private helicopter, but we left ours at home). There are only 200 kilometers of paved roads in the entire country, with a single main road running between the Spanish and French borders along the bottom of a valley. Part way along this road is the only city in Andorra, called Andorra La Villa. It is known for its shopping and its traffic congestion, as the entire town is squeezed into the narrow valley. 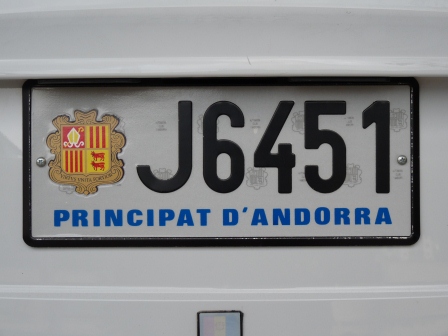 Andorra is not a member of the European Union (these days, who would want to be?), but enjoys a special relationship with it, allowing certain goods to be traded with EU countries without tariffs. Andorra does not have its own currency and uses the Euro. As a strange by-product of its interesting history, Andorra has two co-heads of state – the President of France and the Bishop of Urgell (i.e. the current Catholic bishop of Catalonia, Spain). This means that one of Andorra’s monarchs is elected, but not by the people of Andorra, and the other is appointed by the Pope. Thankfully. they also have a Prime Minister. The parliament meets in his garage (just kidding).
Andorra has a small army, and all able-bodied men who own firearms must serve. All members of the army are treated as officers. The army’s main responsibility is to present the national flag at ceremonies. It all sounds a bit like a Monty Python sketch.

The roads were clear, so we climbed up and over the pass at 2408 meters (7900 feet). After our recent car troubles, we were very pleased and a little relieved with how the S&M Motel performed. We then began a steady descent down through a series of 6 villages to Andorra La Villa. Paralleling the road for the entire 33 kilometers are chair lifts and ski chalets. It’s like the entire country is a single long ski resort! 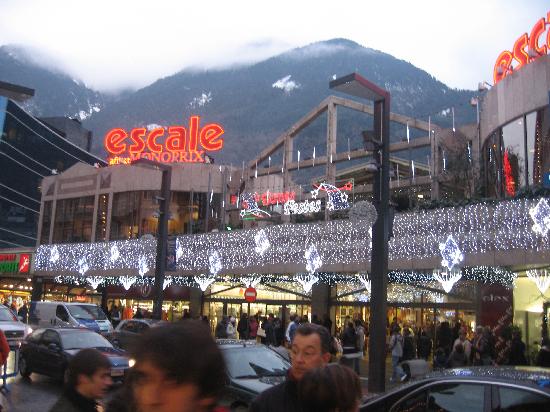 We stayed at the only campsite in Andorra La Villa, which also happened to have a November special (i.e. it’s too cold for the hikers and the ski season hasn’t started yet). The weather was cool, dropping to just above freezing at night. We walked into town and were shocked at the number of stores. There are apparently over 2000 shops in town, one for every 40 residents of the entire country. Everything is duty free, which means that tobacco, alcohol, electronics, clothing, perfume, watches, and other designer goods are all about 25 percent cheaper than in nearby Spain or France. No wonder people flock here. Even the grocery store we visited felt like a feeding frenzy, with people buying in bulk, some of them pulling around 2 shopping carts.