Vietnam became a colony in the 1880’s, when France took control by force. Like most of South East Asia it was occupied by the Japanese during World War II. After the war, Ho Chi Minh, leader of the Viet Minh, communists from the northern part of Vietnam who had resisted the Japanese, declared Vietnam independent. They were not prepared to continue being a colony of France. Patrick thinks that this must have been due, at least in part, to the fact that the French had not been able to defend Vietnam from the Japanese, and that they were undoubtedly more concerned about defending French territory in Europe. This resulted in a war between the Viet Minh and the French, who didn’t want to give up their valuable colony. The French were supported in this war by money and weapons donated by America. In 1954 the Vietnamese captured many French soldiers forcing a negotiated settlement called the “Geneva Accords” requiring French withdrawal and temporarily dividing the country into North and South at the Ben Hai River until elections could be held. The neutral territory on either side of this river was called the De-militarized zone (DMZ). When the anti-communist leader of the South refused to hold these elections, the temporary division became a de-facto permanent one, creating North and South Vietnam.

The North Vietnamese were communists trying to ‘liberate’ their countrymen in the South, only some of who wanted to be liberated. In 1960, they began a military confrontation to reunite Vietnam under their leadership. America worried that if the North succeeded in defeating the American-supported leadership of South Vietnam that the resulting ‘domino effect’ could see all of South East Asia eventually become communist. This was in the late 1960’s, at the height of the cold war. America fought the war in Vietnam from 1965 to 1973 before a cease-fire was agreed to in Paris. Without American support, it was only a matter of time. 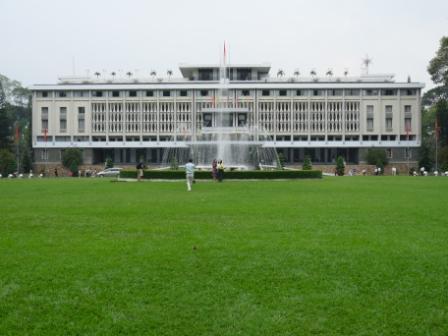 North Vietnamese tanks crashed through the gates of the presidential palace in Saigon, capital of South Vietnam on April 30th, 1975. Soon after it was renamed ‘Reunification Palace’ and opened to the public. It has been preserved in the state it was then. Saigon was also renamed Ho Chi Minh city, but most people still call is Saigon.

We visited the War Remnants Museum in Saigon. It is billed as a museum about the atrocities of war. What they don’t say is that it is a museum only about American atrocities from the war in Vietnam. This makes it even more interesting because it presents only the Vietnamese government’s perspective on the war. It displays much captured American weaponry including tanks, planes, helicopters, and small arms, implicitly reminding people of who won the war. 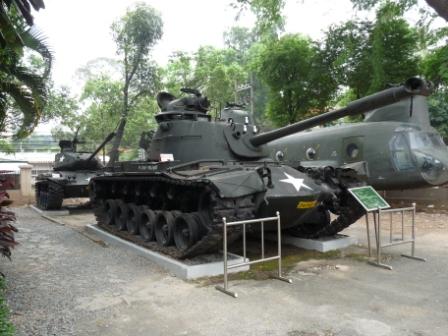 It highlights American war atrocities including bombing of civilians, torture of captured soldiers and civilians, and the use of toxic defoliants like Agent Orange. It displays many pictures of injured Vietnamese civilians, especially women and children, and of birth defects purportedly caused by toxic chemicals. The most gruesome artifact is the bodies of two still born children with physical disabilities attributed to dioxin, floating in a tank of preservative. We wondered what both the Vietnamese people and American tourists milling about thought of these exhibits. Did they feel the same things?

The Vietnamese and much of the world believe that America engaged in an illegal war in Vietnam. Undoubtedly their opposition, referred to here as ‘Vietnamese Communists’, ‘Vietnamese Patriots’, or ‘Liberators of South Vietnam’ and by American soldiers as ‘Viet Cong’ or ‘VC’, committed many atrocities too, but these are never mentioned here.

Today both French and American tourists are welcomed in Vietnam, which has diplomatic relations with both of these countries. There are a lot of French tourists here, probably because Vietnam was a former French colony. French tourists we’ve spoken to say that they do not sense any animosity or resentment from the Vietnamese.