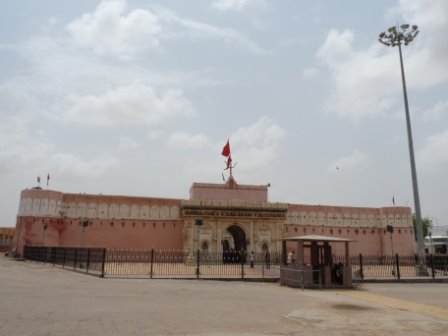 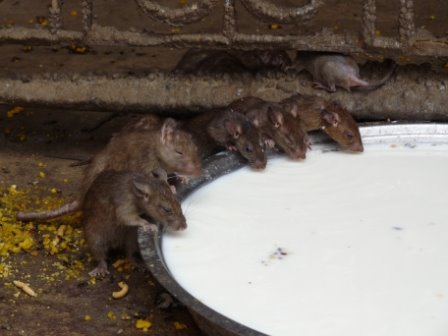 I’m sitting on bunk number 41, coach S1, on the train from Jaisalmer to Bikaner. It is very hot. And very dusty. The train windows are all open as there is no air conditioning in sleeper class. Dust filters in, too fine to be seen during daylight hours, but it covers everything in a light brown coating as it accumulates. I took a short nap, and when I woke, you could see an outline of my body on the blue vinyl of my bunk. I should probably be wearing something over my mouth. As I type, the sweat drips off my legs, creating small craters in the dust on the floor. We aren’t wearing shoes. It’s too hot for sandals. 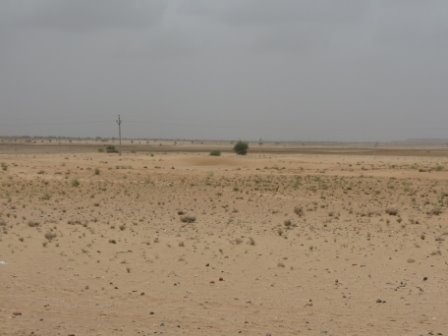 Outside the window, the great Thar Desert slides by, stretching flat to the horizon in all directions. Underneath the dust that coats everything are small rocks and some desert scrub. Occasionally a camel is visible in the distance, or some emaciated cows or goats. 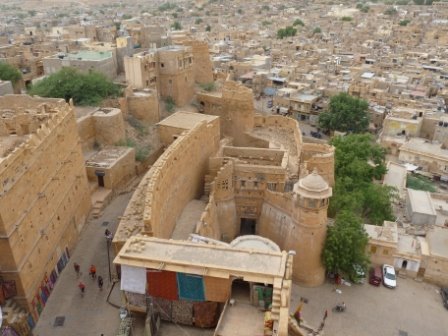 In Jaisalmer it was over 40 degrees yesterday. We toured the Maharaja’s palace in the afternoon. After slowly climbing to the desert fort that towers above the small city that circles it, we barely had the energy to complete the self-guided tour. Diane felt faint and had to sit for awhile.

Afterwards, we retreated to our air-conditioned room in a small hotel and waited for nightfall. Air conditioning just makes things bearable. When we turn it off, the heat quickly forces its way through the walls, and within ten minutes it’s unbearable.

We left our room again at 8 PM and were wet with sweat within a minute. We walked through the dark narrow streets that surround the hill on which the fort sits, dodging scooters, motorcycles, carts, and cows. We went to the nicest place in town for dinner, sitting on the rooftop, where the warm night winds took the edge off the heat. Dinner was delicious, with chicken, vegetables, rice, bread, beer, and tea costing about $10 Canadian. This may sound cheap, but it’s actually expensive for Rajasthan. We typically eat a vegetarian ‘thali’ once a day, which is all you can eat rice, bread, dahl (lentils), raita (yoghurt and buttermilk), several vegetables, and pickles. A thali costs about $1.15 to $2 Canadian per person and is ‘all you can eat’. After this large meal, we typically only eat one other time during the day, with perhaps a few snacks from the street vendors in between.

We’ve been in Rajasthan for about a week now, visiting the towns of Udaipur, Mt. Abu, Jodhpur, and Jaisalmer. Mt. Abu is a hill station rising above the desert at an elevation of 3000 meters. The rest are desert towns built around ancient forts (like castles) constructed by maharajas, from where they ruled their desert kingdoms. 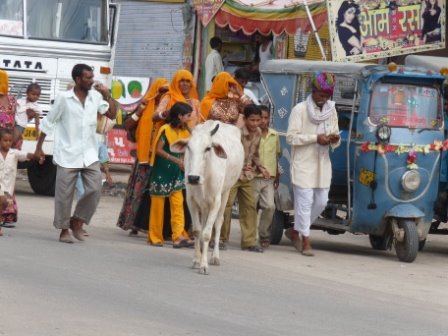 The Rajasthanis are a hearty people, with a rich history and culture. Rajput warriors had a reputation for being particularly brave and chivalrous. They lived by the code “death before dishonour”.
Their fort in Jaisalmer was under siege for twelve years, but still they would not give in. When faced with certain defeat, they would burst forth from their gates in a final, condemned charge, after their wives, mothers, and daughters had committed ritual suicide by immolation (fire). Rajasthan has resisted invasion by many superior forces, and has tended to form loose alliances with their enemies (as with the Mughals and the British). It’s hard to be believe that people would go to such extremes fighting over sand and rock.