We flew from Budapest to Barcelona return on Hungary’s discount airline Wizz Air.  I think the name was meant to conjure images of speed but I can’t help thinking of urination when I hear it.  With the bankruptcy of Malev Hungarian Airlines in February 2012 (after 66 years of continuous operation), Wizz Air is now the leading airline and flag carrier of Hungary.  Officially, it’s a 2 star airline (that’s 1 star less than Air Canada whose service Canadians love to complain about) and it hasn’t made a profit since it began operations in 2004. 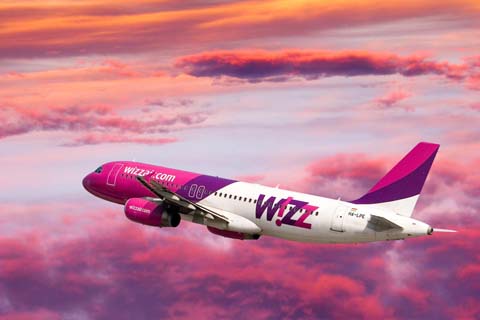 Wizz Air follows the ‘everything is extra’ business model, similar to Ryanair in Europe or Southwest Airlines in the United States.  This means that, in return for your hard-earned money, you are entitled to board an airplane to your destination with 1 carry-on bag.  And that’s it.  Everything else is extra.  And I mean everything.

Booking Fee — Want to use a credit card to pay for your flight? It’s $12 per flight per passenger or $48 for two people on a return trip.  Debit card is only slightly cheaper, so these fees are unavoidable.  How, when I pay for my booking once (for all flights and passengers), can they justify levying the fee per flight and per passenger?

Call Centre Fee – Want to book your flight over the phone rather than using their web site?  $15 per flight per passenger.  That’s $60 for two people on a return trip.

Airport Check-in Fee – If you want to check-in at the airport rather than online (or if you’re forced to because you don’t have access to a printer), it’ll cost you.  $10 per flight per passenger ($40 for a couple return).

Flex Fee – Think you might want to change your flight, but not sure?  You can avoid the Flight Change Fee later if you pay an extra $15 at the time of your original booking.  Basically you’re paying a fee to buy insurance to avoid potentially having to pay another fee.  It’s brilliant!

Xpress Priority Boarding Fee – Wizz Air does not normally assign seats, so how early you board can mean the difference between sitting with your traveling companions or not.  People start lining up at the boarding gate immediately after they clear security.  Want to board early?  $6 per flight per passenger ($24 for a couple on a return flight).  $12 per flight per passenger if you change your mind and decide to skip the line at the airport.

XXLong Extra Legroom Fee – If you’re over 5’10”, the small and close seats on Wizz Air won’t do for you.  If you want to sit in an exit row for the extra leg room it’s $12 per person per flight ($48 for a couple return).  You still don’t get an assigned seat though, just a seat somewhere in the exit rows.

Food and Drink – Nothing is included, but a fine selection can be purchased on the plane for a fee.  I wonder if they charge for water?

Cancellation Fee – You can cancel your flight for a fee of $90, but none of their many extra fees are refundable, so you’re not likely to get any money back.

These fees are in addition to more common fees like Baggage Fees and Flight Change Fees.  Wizz Air has these too.  In fact, the fees mentioned above are just a sample of the 62 different fees that Wizz Air has listed on their web site!

If you have a question about any of these fees or the service you’ve received, you can of course telephone Wizz Air’s customer service center.  Calls to customer service cost $1.50 per minute for you to talk to someone in India.  They probably earn $1.50 per hour.  All calls are charged, and complaints must be made by email.

Do I sound bitter?  I’m not.  More fascinated by the business model.  Wizz Air competes in an ultracompetitive marketplace where consumers are attracted by low base ticket prices.  I know that I’ve been excited in the past by advertisements for flights or cruises with what appear to be low prices, only to learn that when all taxes and fees are included the total price is double or even triple.  When people search for flights online, the lowest airfares are typically displayed first.  Consumers very often choose the flights with the lowest base price.  It’s only after they’re invested in the reservation process that they learn of the extra fees.  Admittedly some of these fees are optional for some people, but some are impossible to avoid (i.e. booking fees) effectively resulting in a higher price than advertised.

With base ticket prices so low, Wizz Air has to make most of its money in fees.  They’re like contractors who underbid with the expectation of making their profit through change orders once they’ve got the work, or like steak houses that charge extra for the baked potato and for the vegetables.  And they’re not alone.  We took a flight from Frankfurt, Germany to Vienna, Austria on Berlin Air last September.  The base ticket price for this one-way, 1 hour flight was only $11 (can you believe it?), but with taxes and fees it grew to over $100.

We made the choice to fly Wizz Air despite all the extra charges.  Even though we paid the Booking Fee, the Xpress Priority Boarding Fee, and the XXLong Extra Legroom Fee, our total price was still half that of the next cheapest competitor.  With such low prices, we were worried that they would cut corners somewhere else (e.g. poor service, old planes, etc.) but the experience wasn’t any different than we’ve had with other small airlines.  Just fine for a short flight, and all flights in Europe are short flights.

Will this excessive level of extra charging be coming to North American soon?  Many discount carriers already charge fees for services that are free (or were once free) on other airlines.  I hope that it doesn’t get to this extreme, but the same basic business model applies, so I don’t see any reason why it can’t or won’t.  Hopefully consumers will stay focused on the total price and service and won’t be overly mesmerized by a low base price.

Note — I used an exchange rate of $1.50 per Euro to keep the price conversions simple.

We arrived in Nairobi twelve hours ago. Our flight from Amman, Jordan was uneventful, though the connection in Cairo was rushed. We were met at Jomo Kenyatta International Airport by Diane’s Aunt Norma and her husband Wayne at 4:00 AM. Norma and Wayne have lived in Kenya on and off for the last four years. Wayne works five weeks on and five weeks off in the oil fields of Kazakhstan, and returns to Kenya to be with Norma, and their children, six of whom are from Kenya. They drove us back to their house, where we had tea, a thirty minute nap, and a shower. Then we headed to church.

Norma and Wayne attend Miracle Restoration Center, a Pentecostal Church located in the Nairobi slum of Sinai known as Lunga Lunga. We drove down dusty dirt roads lined with tin roofed shacks, clogged with people going about their early morning activities. The church is an open concrete building with a tin roof, which opens onto a courtyard shared with children playing, men baking bread, and a stream of raw sewage that you have to step over to enter the church.

The church has bare concrete floors, and is outfitted with plastic patio chairs in neat rows. Everyone was dressed up, with the women in skirts or dresses, and the men in shirts and ties or jackets. We had on our best clothes, but once again, felt under dressed compared to the local people.

Services were in English, with translation to Swahili after each phrase. Bible study, led by Diane’s Aunt Norma, was to start at 9:00 AM, but got started later, as people started to slowly filter into the church on Africa time. Services got underway around 10:30, with the congregation singing, accompanied by a small band, with an excellent guitar player.

One of my favourite parts was when the children got up to dance. Norma and Wayne’s girls Lizzie (8) and Joyce (12), who are members of the church’s children’s dance squad, did African dancing to two songs. Joyce was a soloist dancer for most of the first song, performing with natural ability and charisma far beyond her years. Joyce has malaria. Lizzie and Joyce’s mother died one month ago after a lengthy illness. Their grandfather couldn’t care for them, asked the church to assist, and Norma and Wayne stepped up.

At one point during the service, the pastor’s wife announced Diane and I as special guests, and called us up to the front to speak. Patrick told the congregation that we’d been in Kenya for eight hours, and that we were very glad to be here. Each phrase with translated to Swahili, and people smiled and clapped. It was clear that Diane was expected to speak, but she was overcome with emotion, and just got out one sentence before breaking into tears.

Pastor Laz, a Kenyan, gave a heartfelt sermon, full of passion and conviction. Part way through, the electricity went out, but he and the translator kept right on, speaking louder and with even more conviction. It was a powerful and moving experience.

This was the longest church service we’ve ever attended – it didn’t end until after 2 PM. We were both moved to tears at various points. We have not been saved, but today, in an open-air church in a slum near Nairobi, we felt the Spirit.