We arrived in Zambia about a week ago, and spent the first five days in South Luangwa National Park. Like many of our stories, this one started off with a transportation challenge. South Luangwa is about 120 kilometers from the small town of Chipata, and there isn’t any regularly scheduled public transportation to the park. There is often one minibus that covers the rough dirt road per day, but it leaves when full, which can take many hours. Some friends from Holland boarded this minibus at 8 AM, and waited until 4 PM for it to depart! Hitchhiking is the preferred alternative, and the one utilized by most locals. In more remote areas of Zambia, hitchhiking is an accepted form of transport, with many routes having established rates. Unfortunately, you often end up riding in the back of a pickup or on a flatbed truck. 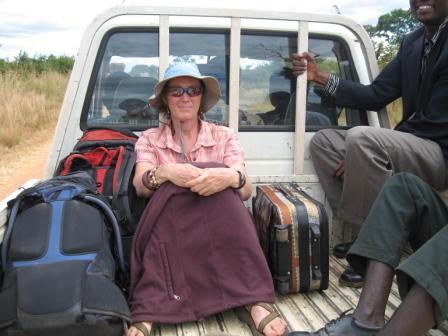 We left Chipata in the early AM and were waiting at the side of the start of the road to the park at about 8 AM. We got a ride three hours later, in the open back of a small truck. A number of local people shared the ride with us, including a woman, her mother, and her two- year-old child, sick with malaria and on the way to the hospital. The road was rough, and once again we were struck with the double flat tire and only one spare scenario, so we waited in the heat of the afternoon by the side of the road, battling the flies. The driver and another guy took both flat tires and started rolling them down the road, heading for the nearest village, which may or may not have had the facilities to repair the flats. The mother and sick child had no water, so they asked and we shared ours.

Vehicle traffic on this road is limited, and we flagged down every vehicle that passed. One was a USAid non-governmental organization (NGO) vehicle, that wasn’t allowed to take any passengers that were not employees. Another was a car with five young men, all drinking heavily, who insisted that we could both squeeze in. We passed. After two hours, a vehicle from Land and Lakes safari company came by, and we pleaded our case. Luckily, they had two empty seats, and one of the passengers was a young Canadian woman from Vernon, who saw the Canadian flags on our backpacks standing in the back of the pickup. They gave us a lift to the park, and we ended up staying at the riverside camp called ‘Croc Valley’ where some of them stayed. In fact, we ended up spending the next two days with them, going on daytime and nighttime game drives, and sharing early morning breakfast and mid-day brunches.

The park was terrific, and we saw a wide variety of wildlife from our open safari vehicle. The driver Godfrey was very good, and he did his best to manage our expectations while catering to our preferences. We had good luck, and saw everything we wanted to. I’m saving the pictures, so as not to spoil things for my friends who are coming to meet us for a safari in Tanzania in a few weeks. Here’s a picture of us on safari. 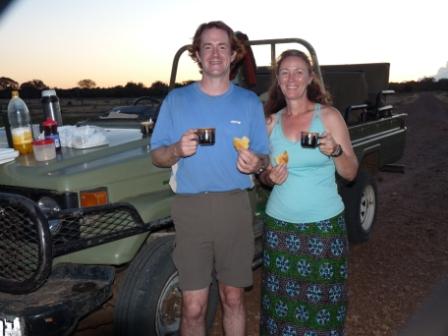 By staying an extra day in the park, we were able to catch a ride back to Chipata with the same group. Unfortunately we arrived too late to obtain onward transport to Zambia’s capital city of Lusaka, so we headed back to the guest house run by the municipal government where we had stayed previously. The young woman from Vernon (Chloe) and her traveling companion from England (Mark) had only a few days left on their trip, and were pressed for time, so they caught a cab to the edge of town at about 3 PM to try to hitch a ride for the eight hour trip to Lusaka. We briefly considered joining them, but thought that hitchhiking with four people would be difficult. We met up with them two days later in another city, and they told us their tale.

They waited at the side of the road with a local man, and all three got a lift in the sleeper compartment (behind the driver and passenger) of a semi-tractor pulling dual gasoline tankers. Their ride was fine for the first two hours, until they stopped for food. After about 45 minutes, the driver and front seat passenger returned to the vehicle, and had been drinking. In addition, they brought a bucket of beer with them. By now it was getting dark, and they were in a truck stop in the middle of nowhere in Zambia. They decided to continue, but spoke to the driver, and asked him not to drink any more. He only had one or two more beers while driving, but the passenger was downing them rapidly, and had about eight or ten. This was OK because he wasn’t driving. About 11 PM, after a long day, Chloe and Mark nodded off. When they awoke, the passenger and driver had switched places! In what appears to be a case of seriously bad logic, they had switched places so that the previous driver could also drink (without driving). Amazingly, they arrived safely in Lusaka about 2 AM.

This was one ride that we were glad that we had the better judgment not to take!