The following posting is by special request from Diane’s relative Jordon who is 8 years old (almost 9).  He was recently studying the Eiffel Tower at school.  His grandma Esther had us over for a great dinner (with birthday cake!) just before our departure, and Jordan requested that we send him a picture of the tower.  This is for you Jordan.

The Eiffel Tower is known in France as Le Tour Eiffel.  It is a large tower made of iron located in Paris, France.  Its nickname in French is La Dame de Fer (The Iron Lady).  It has become a symbol of France and is one of the most recognizable structures in the world. 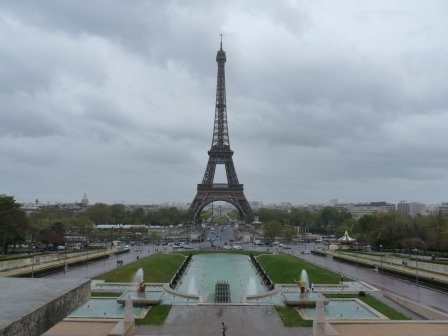 The Eiffel Tower was built between 1887 and 1889.  That’s 15 of your lifetimes ago, but around the same time that your Grandma Esther was born.  It was built for L’Exposition Universelle (The World’s Fair) by engineer Gustave Eiffel, after whom it is named.  Originally it was disliked by many Parisians and so was almost torn down in 1909, but was spared because it turned out to be an ideal place for radio antennas.

The Eiffel Tower is the tallest building in France.  It is 320 meters tall which is about the same height as a 90 story building.  At the time it was built, it was the tallest man-made structure in the world.

About 7 million people go to the top of the Eiffel Tower each year.  You can walk up to the first two platforms of the tower but you must take an elevator to get to the very top.  It takes over 300 steps to reach each platform.  We decided to walk up because we needed the exercise! 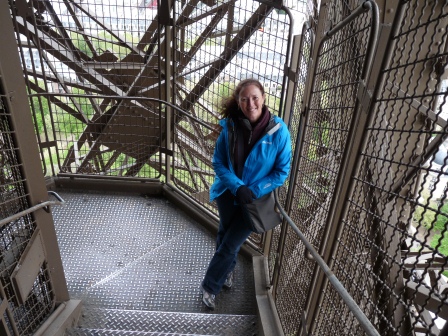 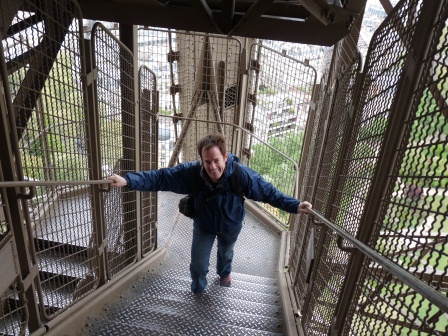 Patrick is hot on her heels!

The iron tower must be protected with paint to stop it from rusting.  It takes 50 to 60 tonnes of paint to cover it, and it must be painted every 7 years.  Would you like that job?  It is currently painted brown but they do change the colour occasionally. 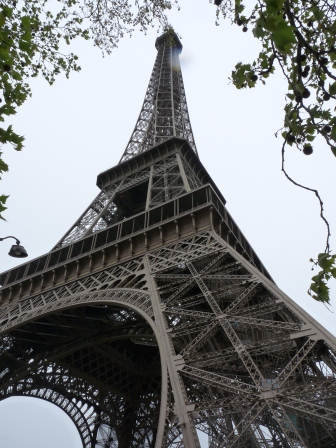 Looking up from the base of the Eiffel Tower

The height of the Eiffel Tower changes with the temperature.  In the heat of summer it grows up to 15 centimeters taller as the metal expands. 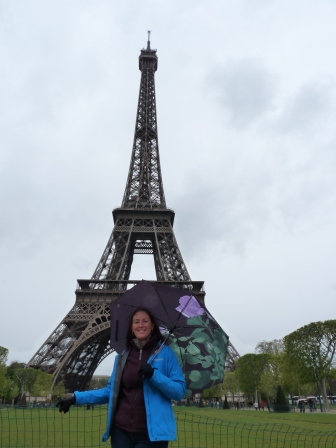 Diane in the rain in front of the Eiffel Tower

We hope that you have enjoyed this story about the Eiffel Tower.  If you have any questions, please leave a comment on the blog and we’ll write back to you.