Ladakh is the eastern region of the northernmost state of India, a dry place in the rain shadow of the Himalayas. It is an alpine desert, with high mountains and valleys composed of loose rock, dust, and sand. Ladakh is devoid of trees except for the valley bottoms where rivers and streams run, most notably the Indus River which originates in Tibet, even further north. Ladakh is strewn with snow-capped mountains of high elevation, making it a popular destination for trekkers and mountaineers. 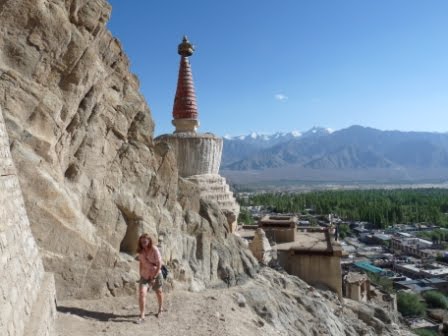 At various points in history, Ladakh was part of the same kingdom as Tibet, as they share the same stretch of the Himalayas. They have a lot of common culture, and Ladakh is home to thousands of Tibetan refugees who escaped, along with the Dalai Lama, when Tibet was taken over by China or to escape Chinese persecution since then.

Ladakh’s population is about 80 percent Buddhist, with the remainder primarily Muslim, which accounts for the mosque which wakes us up every morning at 5 AM, after which we promptly go back to sleep. Most of the people look like Tibetans or Nepalis, more Asian than the Hindus from the South or the Muslims from the West. Many people wear traditional Tibetan clothing and Tibetan food, mostly heavy soups and dumplings which we really enjoy, is commonplace.

Leh is the capital city of Ladakh, and has about 30,000 people. It is situated on the banks of the Indus River at an elevation of 3500 meters (11,500 feet), which is why we both experienced some symptoms, primarily headache, of Acute Mountain Sickness (AMS) when we arrived by plane. These resolved themselves in a couple of days as we acclimatized. The city is dominated by a 500 year old dilapidated palace set on the hilltop above the town, with a Buddhist shrine and small victory fort on the mountaintop further up. 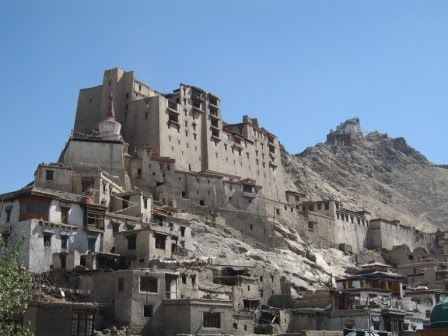 In summer, Leh is a busy place, with tourists coming for the trekking, mountaineering, river rafting, and Tibetan culture. The residents are busy catering to the tourist trade, and preparing for the long winter ahead by cutting and storing wood for heat and grass for their animals (both of which are stored on their rooftops), and harvesting apricots, apples, barley, and wheat during the short growing season. In winter, which lasts about nine months, all roads to and from Leh are blocked by ice and snow and the only way in or out is by airplane.

On our first full day in Leh, we joined a young couple from Belgium on a day tour in a rented jeep with a driver and guide. We visited two Buddhist ‘gompas’ (monasteries) and two palaces, each about 500 years old. Hemis Gompa and Thiksey Gompa have been in continuous use since they were constructed. Buddhist monasteries typically have a walled main courtyard, several chapels adorned with colourful paintings and statues of Buddha and related deities, and the living quarters of the monks called ‘cells’ (they sound cozy, don’t they?). Heading south from Leh, we also passed through Choglamsar, home to thousands of Tibetan refugees, and a ceremonial residence that the Dalai Lama uses when he is in town, which he was on the day we passed by. 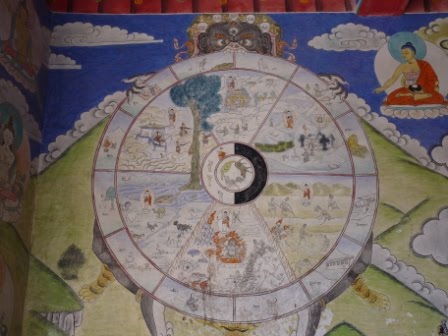 Our guide, a young Buddhist man, did his best to explain some of the basic concepts of Tibetan Buddhism (the five things that all Buddhists must do; the Wheel of Life; the three elemental sins – ignorance, anger, and lust; reincarnation; etc.), some of the history, and the elaborate ornamentation of the monasteries. Buddhism, like most religions, seems to be very complex when you delve into it.

Before entering a chapel, you must remove your shoes. Visitors process in a clockwise direction around the room. Most chapels have one or more large statues of Buddha, in some cases two or three stories high. In Hemis Gompa our guide felt the need to remind us that farting in a chapel is not appropriate, after someone, who shall remain nameless, let one loose.

We watched some Monks preparing a ‘mandala’ of brightly coloured fine sand. This is a painstakingly detailed procedure, and risky in that the slightest bump, brush, or breeze can spoil weeks of effort. 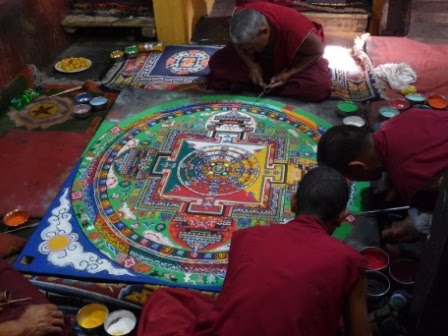 At Thiksey Gompa we visited the kitchen where they prepare food for the over 300 resident monks. We saw the massive stove with built-in pots, and we were offered a cup of Ladakh tea, which we accepted, not knowing initially that this was the famous ‘butter tea’ common in the Himalayan regions. Butter tea is made with water and tea (presumably), but also butter and salt. Patrick, after reading many books on Himalayan mountaineering, was excited to get his first taste of the legendary brew. Unfortunately, it left much to be desired. The taste of butter, obtained from variety of potential sources (cow, goat, sheep, or yak) and almost certainly not pasteurized, was overpowering. The drink is very rich, intended to keep people warm during the long Himalayan winters. In the heat of the summer, the buttery taste was overpowering, clinging to the lips and palate, and repeating thereafter.

Stok Palace, the residence of the current King of Ladakh (now purely a ceremonial role) is being converted into a hotel, like many of the palaces of Rajasthan, to bring much needed income to the monarchy. Princess Anne visited there at some point, as evidenced by the dusty black and white photographs on display. We walked right past the King, sitting in his SUV outside his palace, presumably waiting for someone to emerge. We didn’t talk to him, as we always feel so awkward when conversing with royalty.

Leh is a beautiful city with amazing views of the scenic mountains and historic buildings. The rich culture is palpable and we plan to make this area our base for a variety of activities over the next two weeks.