I was looking forward to seeing Athens again.  I was here for 1 day only when I was 17 years old, a stop on a whirlwind educational trip to the Mediterranean that I took with my school in Grade 11.  Diane and I got up early and drove from Delphi, the home of the famous Oracle, and arrived at Camping Athens in about 3 hours.  We had a quick lunch and caught a bus followed by the metro (subway) to the Acropolis.

We decided to beat the heat of the afternoon by first visiting the air-conditioned Acropolis Museum, a beautiful new facility at the base of the Acropolis.  It was built with easy money prior to the Greek debt crisis to house the treasures of the Acropolis, the temple complex on the hill above.  The Acropolis is the site of the famous Parthenon, a 2500 year old temple to the goddess Athena the Virgin and the finest temple of the ancient world.  This museum provides a good history of the Acropolis from ancient through classical to modern times, displays many pieces of statuary, and has a full-scale installation of the frieze of the Parthenon.

We headed up to the Acropolis around 5 PM, hoping that the majority of tourists would have vacated.  We hiked up through the Propylaea Gate, past the Temple of Athena Nike, then around the Parthenon and the Erectheion.  I took lots of photos, some of which were undoubtedly outstanding, but we eyed an approaching storm and headed down the hill.  The sky became grey and the wind picked up.  The marble steps and rocks were slippery enough on our way up and were likely to be even more so when the rain started coming down.

I climbed Areopagus (Mars Hill), a bare marble outcrop across near the base of the Acropolis upon which the Apostle Paul was supposed to have delivered his famous speech (Acts 17:16-34) to Athenians about the Christian god.  Diane needed to go to the bathroom, so she headed off to the ticket booth to find the loo.  The storm looked like it might bypass us.  I sat there with some brave tourists watching the storm sweep down on the city of Athens below us.  Diane soon returned so I stepped away from my choice bit of rock, leaving my backpack there to secure my spot.  I helped Diane up the final bit of stone and we returned to my chosen seat.  Streaks from the clouds showed us where the rain was falling.  Lightening arched down on the distant hills.  It was a spectacular show.  Luckily I brought refreshments.  Salted peanuts and a large can of beer to share.  I was really enjoying myself.  Diane didn’t like the look of the approaching storm and wanted to go down. 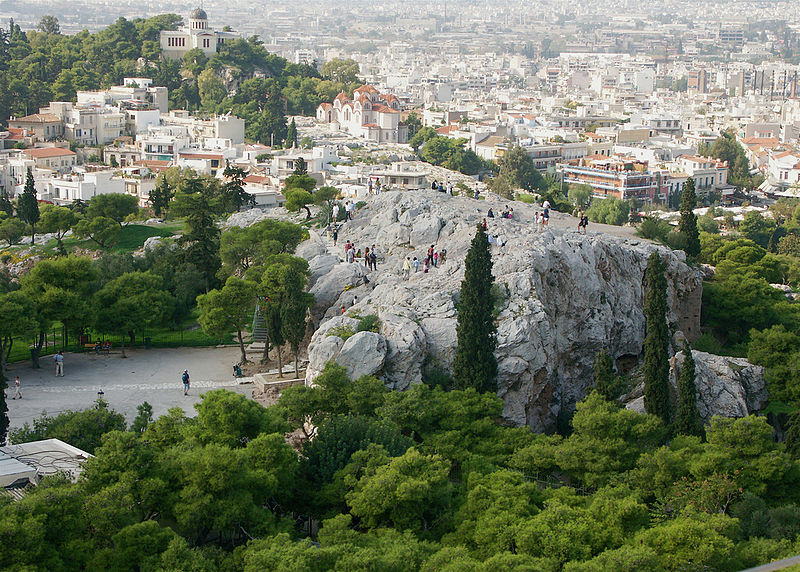 I reached for my camera to take another amazing picture of the storm, but it wasn’t there.  I remembered setting it on the rock beside me, but it was gone.  A quick feel of my backpack confirmed that it wasn’t there either.  I said to Diane, “My camera is gone.  Stay here with the stuff” and I jumped up to see what I could see.  I had only set it down beside me one minute beforehand.

I didn’t see anyone obvious carrying it, so I headed for the steps.  There were two young guys there, one of whom was carrying a camera protectively, but it had a different strap than mine.  I ran down the steps and found 2 Greek cops at the bottom, sitting in a marked Smart Car.  I was eyeing the crowd retreating from the rock, but I didn’t see my camera.  I told the policemen that someone just stole my camera.  To their credit, one of them jumped into action, and I followed him up onto the rock.  By this time the rain had started falling, and Diane was packing to leave.

Because I hadn’t seen who took the camera, there wasn’t much we could do.  We scanned the crowd, but no one looked suspicious, until the cop spoke to 3 young men carrying plastic bags.  They started to scatter, and the cop started to chase them, so I started to chase them too.  The cop quickly called it off though, and said that they weren’t camera thieves, but illegal umbrella salesmen, operating without a license.

And so, my camera, 2 spare batteries, 2 memory cards, and the case were gone in an instant.

I am an experienced traveller (48 countries and counting…)  I know better.  In all my travels, the most valuable thing I’ve had stolen was a travel alarm clock somewhere in Indonesia.  I’ve met many others, including close friends, who’ve lost valuables while traveling though.  In certain places you only need to let your guard down for a second.

On the bright side (I’m an optimist), the camera had served me well.  It was 40 months old and had been traveling for over 15 months of its life, visiting 4 continents.  I got my money’s worth.  And fortunately, I made a copy of my photos only 2 days before, so I didn’t lose many. Apparently the person who took it wanted it more than I did.  Unfortunately, I won’t be able to share my Delphi or Acropolis pictures with you, but let me assure you, they were awesome.

Update – I’m going to buy a new camera, spare battery, memory card, and case to replace the ones I’d lost.  Let’s hope that I can record as many wonderful memories with these as I did with the last ones.  In the meantime, we’re using our back-up point-and-shoot camera and iPhone for photos.

Author’s Note — Today’s blog cost hundreds of dollars.  I never knew that blogging would be so expensive!