For 6 months each year, Munich is home to one of the most unusual hostels we’ve been to.  Located in a botanical garden about 6 kilometers from the city centre is The Tent, a summer-only hostel providing accommodations in tents.  It is the cheapest place to sleep in Munich. 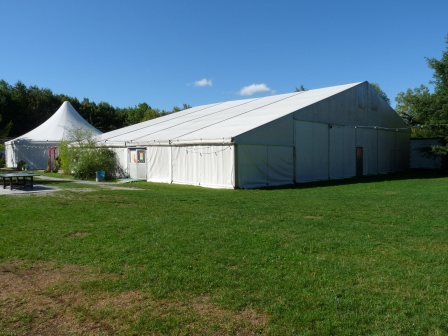 It’s called ‘The Tent’ as opposed to ‘Tents’ because initially there was only one giant white circus tent, and everyone slept together on the floor on sleeping mats.  Now, they have two additional circus tents offering ‘premium’ accommodations where everyone still sleeps together in a giant tent, but on bunk beds. 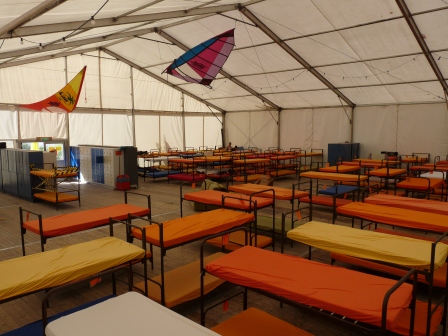 Diane and I spent 3 nights at The Tent, making the decision to splurge and go for side-by-side
bunk beds (how romantic).  Our tent had bunk bed spaces for about 80 people which we thought might be quieter than the other tent which slept around 160 people.  Quiet is only a relative term in such conditions though, with people coming and going until late at night on the astonishingly noisy floorboards.  Our first night’s ‘sleep’ wasn’t great, with the sign from the exit light glowing in our faces.  Diane rectified this the following night by hanging a blanket down from the upper bunk on her bed.

A sheet is provided to cover one’s mattress as are heavy wool blankets (circa WWII).  They recommend 4 blankets at this time of year — 1 to roll up for a pillow (which isn’t provided) and 3 to sleep under.  At check-in Patrick inquired whether they wash the sheets and was told, ‘yes’.  At checkout he inquired again and learned that in fact, they wash the sheets and blankets ‘when they look dirty’.  Ouch!  Another example of German efficiency.  Let’s hope that we haven’t brought any little friends along with us as a memento of our time there. 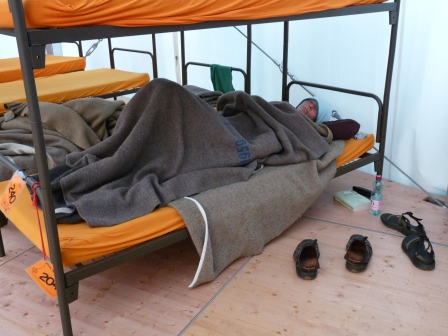 Why would we subject ourselves to such an arrangement?  Firstly, it wasn’t that bad.  When you’re traveling for as long as we are, care must be taken to manage costs and to prioritize the things that are important to us such as seeing the sights, meeting the people, and enjoying the food and drink.  More importantly, The Tent is a European backpacker icon, a must-do when traveling Europe.  Most of the time we’ll be sleeping in our RV anyhow, so this type of accommodation will only be periodic and temporary.

The tent is full of interesting characters, like the people who got up each morning, dressed in business clothes, and headed off to work (apparently long-term accommodations are difficult to find in Munich).  And the guy who sat there working on his computer all day every day.  And the  woman who slept near to us who seemed to spend the whole day dressing and undressing (including applying Egyptian-style eye liner and pony tail hair extensions a-la Lara Croft), moving things back and forth between her 3 lockers, and wandering around in her bra and leopard print bikini underwear (sometimes while wearing army boots).

The Tent provides lockers to secure one’s things, clean bathroom and shower facilities, a cooking area for those who want to self-cater, free Wi-Fi, and a casual restaurant with a set menu of basic foods and an a-la-carte breakfast (not included).  It is conveniently located about 15 minutes by tram (#17) from the city center and main train station (Haupbahnhof).  The staff is friendly and the beer is cheap. 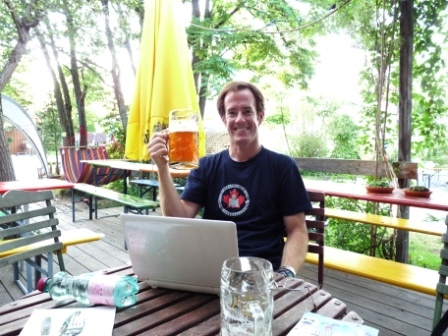