On our first morning in Kabale, in the mountains of southern Uganda, we met a young blond woman named Yana. We were in a bakery, and she offered to assist us. We got to talking, and she told us that she is a volunteer who has been in Uganda for 13 months. Her official assignment is to volunteer with the ‘House of Edirisa’, where she leads an out of school enrichment program called ‘Smiles’. But she has also been volunteering with an organization helping the Batwa people.

The Batwa are a race of people whose homeland is the mountains that lie on the borders of Uganda, Rwanda, and Democratic Republic of Congo. The Batwa are a small minority in these countries, less than one percent of the population. Their total number is less than 5000. Their mountains are covered by dense tropical rain forests, which are also the home of the mountain gorillas. Their livelihoods, culture and religion are based on these forests as traditionally the Batwa are hunters and gatherers, living in harmony with the forest. There they are semi-nomadic, moving every few months in search of fresh food supplies. Their tools are pre-stone age. They use sharpened sticks for digging and cutting and arrow tips are just fire-hardened sharpened wood. Occasionally they utilize an iron knife for slashing the thick underbrush. They have lived in these forests for thousands of years.

The Batwa are small in stature. They are also known as “pygmies”, which denotes ancient dwellers of the forest. They are between four and five feet tall.

Over the past 20 years, many of the Batwa homelands have become parks or forests reserves. In many cases, the Batwa were forced to leave their forests, and in some cases, were given land on the surrounding mountain tops. This dealt a devastating blow to these Batwa. They could no longer hunt or gather in the forest. It became illegal for them to even enter the forest, and they are now arrested for being there.

Yana told us about some Batwa villages, and the people that she is working with to help them. We were intrigued, so after returning to our hotel to get our belongings, we tracked her down, and asked her for more information.

With their lives devastated, many Batwa now live in extreme poverty. They are not traditionally farmers, and many have been unsuccessful in cultivating their own crops. They have little or no experience with raising animals. It matters little, as they have neither seed to plant nor animals to raise. As a result of their poverty, and lack of alternative means of support, many Batwa have been exploited by their neighbouring tribes. They have been reduced to virtual serfdom. Some are ‘employed’ to guard the crops of others. Many others have been sexually exploited. They are discriminated against, and are ridiculed if they go into other villages. Some Africans believe that the Batwa have magical powers, and so they are pursued like mythical leprechauns.

The Batwa rarely use the past or future tense, conversing almost exclusively in the present. They essentially had no paradigm or terminology to transition to the 21st century.

Yana told us about five Batwa villages that a very small local aid organization is trying to help. This organization is made up of three young Ugandan men – Anthony (a student), Saul (an accountant at a secondary school), and Nestory (a part-time teacher). They are three non-Batwa friends that come from a village at the foot of the mountains, a four hour steep walk from the Batwa they are trying to help. The Batwa villages are high in the mountains, at about 8000 feet elevation. The fastest route there from Kabale, the closest city, is a two hour drive followed by a hike of up to three hours. For seven years they have been going to visit the Batwa, establishing a relationship, and helping where they can. They helped to get vegetable seeds and start a garden. However, they were extremely restricted in what they could accomplish because they have limited financial means.

Enter an American named Barton Brooks. He is the founder of Guerilla Aid, a one man international aid organization. Barton travels the world in search of projects to help people. His mission is, “Find something that needs doing, do it, and teach others how to do it”. Barton arrived in Kabale about four weeks before we did, and put together a plan to help these Batwa villages, working together with Anthony, Saul, Nestory, and Yana. In the first ten days, this small group got donations to build a chicken coop in the first village, stocked it with 100 chicks, and provided feed and someone to care for the chicks until the Batwa learn to do it for themselves. They also helped a very old man.

They found the old man lying naked on a neighboring hillside. For 30 years, he had lived alone in a grass hut on a hilltop. His job was to guard the potato field of a non-Batwa, in return for which he was paid one potato per day. When they asked him what he wanted, he said that he didn’t want to die in poverty, and that he would like to return to a Batwa village to live in a hut of his own. In just a few days, the small group of volunteers helped him to achieve this. They built him a tiny hut, with a mat and blankets on the dirt floor. They bought him some clothes. Then they built a stretcher, and went to get the old man. When they arrived, he said that he wanted to walk to his new home. Because of they way he had lived, this was extremely difficult for him, and the normal ninety minute walk took over three hours. But he made it. When he arrived, the villagers danced and sang.

Barton and Anthony’s were riding a motorcycle that collided with a Land Rover on muddy roads coming down from the village. Anthony broke his arm. Barton broke his collar bones, both arms, and had a compound fracture of his femur (sticking out the back where his hamstring should be). He spent two days in hospital in Uganda, and then was evacuated to the United States where he has had many surgeries and is still in hospital.

Two of Barton’s friends from Utah, Chris and Paul, where scheduled to come for ten days to work with him. When Barton was injured, they were considering canceling their trip. But they decided to come anyway, based on Yana’s urging, to continue the good work that had been started. We met Chris and Paul in Kabale, when they returned from a day of work in the Batwa village, where they were building bamboo furniture for the school which had none.

Yana told us about the first of the five Batwa villages they were currently trying to help. This village has about 80 adults and 90 children. They live in about thirty mud huts with grass roofs on an exposed mountain slope. Their biggest problem is starvation. They have no animals, other than the chicks that were recently provided for them. They have only a small vegetable garden that cannot sustain the village. They live on a diet that consists primary of porridge made from sorghum. They have no good source of protein.

We decided that we wanted to help. Rather than spend a few days relaxing at Lake Bunyoni, this seemed like something more important. Given that the most urgent priority for the Batwa was food, we decided to donate seed potatoes to the village, to take them there, and to plant them. There was much discussion about whether this was feasible. Did the Batwa have sufficient land to plant the potatoes? Was the land cleared and tilled? Did they know how to plant and harvest potatoes? Did they know how to reserve some potatoes to re-plant? And most importantly, is this what the Batwa wanted? There were some unanswered questions, but it seemed like it would be feasible, so we went ahead.

We donated money to purchase 500 kilograms of seed potatoes and five heavy hoes to till the land and plant them. We arranged to transport all this and us to the village.

We arrived at about noon after a long car ride and a short hike. The elevation was high enough that we noticed a shortness of breath on the walk (at least that’s what I choose to attribute it to, and not a lack of fitness, although that may very well be the case). In these mountains, like many around the world, the weather changes frequently, and rain squalls arrived every hour or so during our time there.

The Batwa men had carried the potatoes up the steep hillside from another village the previous day. They had spent the morning of our arrival tilling two plots of their land with hand tools, so this land was thankfully ready for planting. Like all their land, these plots are located on the hillside. The potatoes had been kept in a secure hut overnight. When one is hungry, it is difficult to care about sustainable farming, and seed potatoes are easily eaten. 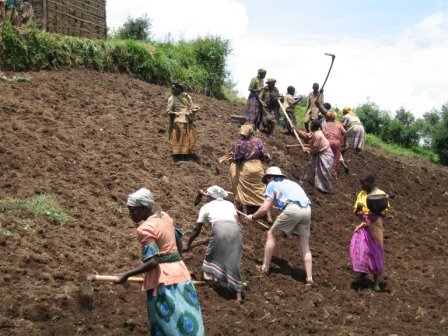 Diane, Patrick, the village women, and a couple of Batwa men set to work planting the potatoes. Working from the bottom of the hill, a line of people with hoes dug holes about a foot apart into which a seed potato (or two small ones) were dropped.
Then a similar set of holes was dug immediately above the first, with the dirt pulled down to cover the lower hole. This continued all the way up the slope, and the work progressed very quickly. Before we knew it, the first plot was planted, and we moved to the second one. 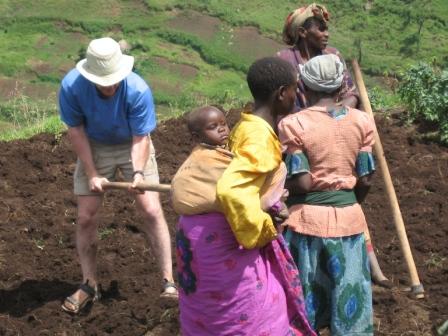 Despite their size, the Batwa women are tough.

They swung the hoe almost as hard as Patrick, and didn’t seem to tire as the work progressed. One of the Batwa women was giving Diane a hard time because she wasn’t doing it right. 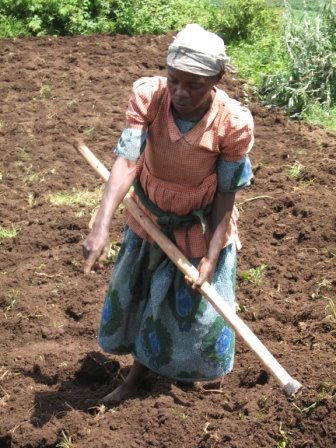 Upon completing both plots, we paused. Because it’s difficult to work when one is hungry, we had brought some meager food with us for the village. It was recommended that we bring buns, because they are easy to transport and can be eaten immediately, requiring no fuel to cook them. When offered the choice, the Batwa choose to finish planting the second plot before eating.

We handed out the food, and because some of the village men were working elsewhere, there were extras, but we did not eat.

Afterwards, we walked around the village. We met the old man who had recently been relocated. He stood in the door of his new hut, wearing his new clothes, which were a bit too big for him. Diane met Hope, an 18 year old mother of two. She now cares for the old man, with food provided for him.

We saw a new hut being constructed for a single mom with several children, whose old hut was falling apart. 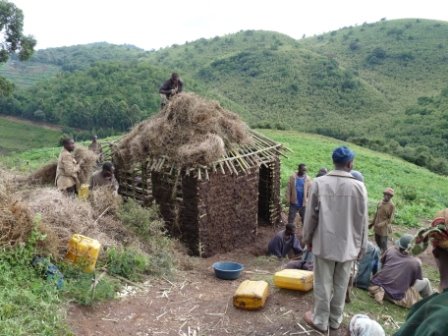 We also helped with the construction of furniture for the school — bamboo desks and benches tied with twine, straight out of Gilligan’s Island. The children have no pencils or books, but at least they won’t have to sit on the floor.

As the end of the afternoon approached, it began to rain steadily. We said our goodbyes, and started to walk down, at which time it began to hail heavily, so we beat a hasty retreat back up to the school building. On our next attempt, we made it down to the car for the long drive back to the Kabale.
The Batwa are an amazing people, and we hope they will survive. The odds are against them.