We arrived in Shimla on a ‘toy train’. This is the name given to India’s narrow gauge railways. Our train went from Kalka, a one hour bus ride from Chandigarh, to the hill station of Shimla, in the province of Himachal Pradesh. It took about six hours to cover the 90 kilometers up the steep foothills of the Himalaya, so this is not a fast way to travel. This train line, a wonder of engineering when it was opened in 1903, has over 900 bridges (all built of stone arches), 103 tunnels, and constant turns as it switchbacks up the mountains. At over a kilometer, the longest tunnel took us three minutes and twenty seconds to traverse. The train is so small that there are no doors between compartments, necessitating the elimination of both conductors and food service, but the frequent stops allow passengers to hop off the train for refreshments. 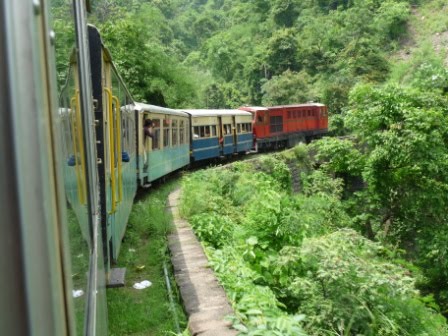 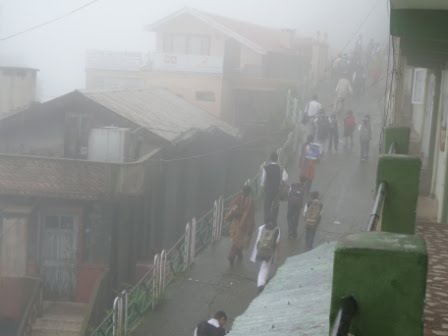 Shimla used to be the summer capital of India. The entire colonial government moved here from Delhi for more than six months each year, in order to beat the heat on the lowland plains. At 2206 meters of elevation (about 7000 feet, or the peak of Blackcomb mountain), it remains comfortably cool even during the North Indian summer. It is often clouded, with mist rolling in from the surrounding hills. For us, it was a welcome change after the blistering heat of Rajasthan and the noise and intensity of Delhi.

Shimla spreads a long way across a ridge, and extends down the slopes of the neighbouring hills. There is scarcely a flat spot anywhere, and the hills gave us some much needed exercise. Shimla is a terrific place. No cars are allowed in the center of the city. Smoking and spitting in public, even outdoors, are both illegal and there are foot police everywhere to enforce this.

Shimla, like Rishikesh, is a popular tourist destination for Indian people. Aside from being cool in summer, it has a variety of old colonial buildings, and a lot of hotels and shops catering to tourists. One afternoon we walked five kilometers down the ridge to the Indian Institute of Advanced Study, which was previously the Viceregal Lodge. The British Viceroy used this building, which resembles Hogwart’s school, primarily to entertain guests. Every stone was carted up the mountain eight kilometers on the backs of donkeys. Although there are thirty scholars currently in residence, we did receive a brief tour of the interior, which consisted primarily of the grand lobby (clad in Burma teak), and a room full of pictures of dignitaries who have visited the building. This lodge is where the partition agreement was signed that created both Pakistan and India from the former British colony.

We spent a lot of time at a restaurant called “Indian Coffee House”, which, much to Diane’s delight, served real brewed coffee for 12.5 Rupees a cup (about 30 cents Canadian). We also managed to try out one of the tourist food outlets. 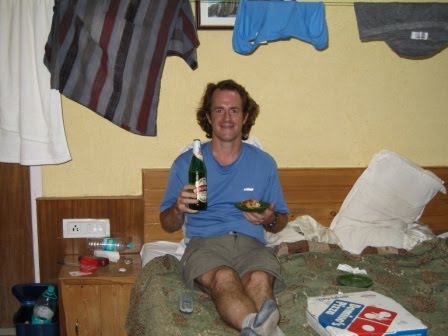 We walked up the hill to the Jakhu temple, which is dedicated to the Hindu God Hanuman (the monkey god). The pathway up to the temple is plagued with many real monkeys, who are quick to attack anyone carrying food. Of course, there are ‘monkey food’ sellers along the way, with a troop of monkeys waiting just up the trail to set upon anyone who is carrying anything resembling food. The local people usually carry a stick to fend off the monkeys, and we brought one just in case, which wasn’t needed because we weren’t silly enough to carry food through a gauntlet of marauding primates.

The trail to the temple was steep, like the middle section of the Grouse Grind. What was vaguely satisfying is that the city council has erected a signpost at the bottom of the trail indicating various ascent times by age group and corresponding fitness levels. People aged 30 to 50 who are fit should take less than 45 minutes for the climb. We did it in 23 minutes (not that we’re competitive or anything). This sounds impressive until you realize that most Indian people don’t exercise, and most are doing the walk in flip-flops.