Today we rode the bus in Uganda. It wasn’t the first time, and it won’t be the last.

We caught a shared minivan, known as a ‘matatu’, from our hotel on the outskirts of Kampala, the capital of Uganda, to the area of town where the buses park. There are actual several matatu and bus parks located here, and all the surrounding streets are crammed with matatus and people squeezing between them. The sidewalks are either broken, or jammed with the merchandise of vendors that spills out of their shops, making the muddy streets the only alternative to move around.

We started our search for a bus at about 10:00 AM, walking around trying to find which of the fifteen bus companies spread over four lots had buses leaving for Kabale, and town in the southwest of Uganda near the Rwandan border. After getting lost more than once in the maze of streets, and walking away from one company that wanted too much money and appeared to have questionable looking buses, we finally found a bus at about 11:30.

Upon entering the bus park, we were immediately grabbed by a woman who was one of the many ‘brokers’ or ‘guides’ that work the area. Walking us the 50 feet from the entrance of the bus park to the door of the bus, where we bought our tickets, entitled her to a commission of 1000 Ugandan Shillings (USh), about 60 cents Canadian, from each of our ticket prices (15000 USh). Before purchasing our tickets, we asked when the bus would be leaving, and were told by the ticket seller who stands near the bus door, “45 minutes”.

We boarded the bus, which was nicely painted on the outside, but lacking in most other regards. Instead of the usual four seats in each row, divided by a center aisle, an extra seat had been added to each row (three on one side, a narrow aisle, and two on the other). The seats were covered in stiff plastic, which in theory could have allowed them to be cleaned. The seats closest to the aisle each had an arm rest that flipped up, allowing easier access from the aisle. The arm rests had long since lost all their fabric and padding, and were instead just bare metal bars with sharp edges. We squeeze our backpacks into the overhead racks, and started to wait. 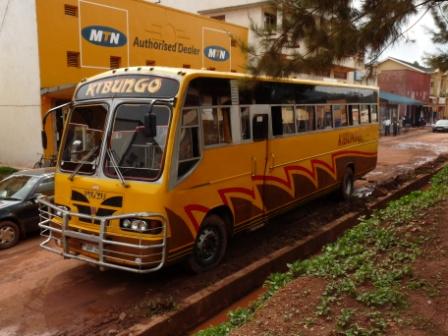 The bus was sitting, along with about thirty other buses, in two rows in an open parking lot under the hot sun. The parking lot was of the smallest possible size that could hold that many buses, while still allowing the occasional departing or arriving bus to be shoe-horned in and out with twenty-point turns. Our bus had its engine idling, doing our part to add to the heat and fumes.

The interior of the bus was a toxic sauna. Very hot and stuffy, it smelled like a mixture of body odour and gasoline fumes and was at least 35 degrees Celsius. There were already a few other passengers sitting in the hot interior of the bus, some sleeping. We took turns sitting in the bus, to watch our belongings and secure our seats, while the other person stood outside to try to get relief from the heat. Although there was more air outside, the sunshine beating down made it more of a change than an improvement.

At one point, Patrick went in search of food, while Diane remained on the bus. The bus started to pull away, and Diane ran to the front of the bus trying to stop them from leaving. It turned out they were just re-positioning the bus. When they started to pull away again, Diane did the same, much to the amusement of the others on the bus. One of the other passengers reassured her that the bus wouldn’t be leaving any time soon.

After forty-five minutes of sweating, plus another 10 minutes for good measure, Patrick inquired with the ticket seller when the bus was leaving. He replied, “45 minutes from the last time I told you”. It soon became clear that the bus wasn’t leaving any time soon. After 90 minutes, and several information gathering discussions with other passengers, it became apparent that the bus would in fact be leaving as soon as all the seats had been sold. Since a refund was out of the question, and any other transportation option would presumably be the same, we sat and we waited some more.

After two hours, the bus was about half full and the temperature was climbing with the afternoon sun. African people are really tolerant of the heat, often wearing several layers of clothing when Diane and I are in shorts and t-shirts, but it was so hot in the bus that the men were taking their shirts off.

While we waited, we were provided with entertainment of a sort. Each new arrival to the bus was a source of small encouragement. Often they were pulled to the bus by one or more brokers, who then fought over the commission and sometimes the passenger, pulling them back and forth to demonstrate their ownership. The bus was filled with a steady stream of hawkers, coming on board to sell radios, flash lights, men’s and women’s shoes, picture frames, candy, and more. They squeezed down the narrow aisle with their wares, pushing past one another and the passengers. Some carried glass plates of food or soda in glass bottles, which you were expected to eat while they waited to collect the glassware. Another guy was selling medications; including de-wormer which it appeared was for human use.

After three hours, we were starting to wear down. Diane was leaning forward with her head on the back of the seat ahead, desperate for a hint of a breeze. By this point, our late departure time guaranteed we would be traveling at night in the mountains, on questionable roads, and arriving late in a small town with no accommodations booked.

Finally, after three and a half hours, the bus filled up and pulled away. We were the only white people on the bus. We thought that things were looking up, but they were only just beginning.

Despite being told that the bus would stop three times, there was only one bus stop, about one hour into our trip. The bus pulled over at a police checkpoint, and the men, plus two women in long skirts, got off to pee at the side of the road, in full view of the remaining passengers. Diane stayed on board.

Bus drivers in Africa have a reputation for traveling too fast. The narrow roads barely provide enough space for a bus to get by oncoming traffic, and at 70 miles an hour, the other vehicles flash by with less than twelve inches to spare. The roads have no shoulder, and often the driver needs to hang some wheels off the broken edge of the pavement, resulting in bone jarring bumps. The roads have a disproportionate amount of large vehicle traffic, perhaps because so few people have cars, so the buses are forever passing slower moving vehicles (usually long gasoline tankers), and often on blind corners and hilltops. There don’t appear to be any speed limits, so the speed is the maximum the driver can reasonably extract from his vehicle and the road conditions, plus twenty percent.

Our bus seemed to have a serious problem with its rear suspension. Every bump was transferred directly to the occupants. Large bumps were accompanied with a loud bang, as the cab of the bus smashed down onto the undercarriage. About one hour into our trip, we hit a bump so hard that the side window in the row behind us shattered, dropping large shards on the passengers. The assistant driver stood up at the front of the bus to see what had happened, then sat down again. The bus continued on.

As darkness approached, we hit a bump so hard that we actually launched out of our seats and into the air. Luckily, Patrick avoided being impaled on the metal armrest. At the back of the bus, some passengers had hit the ceiling, and one man was seriously injured. He cried out, and the passengers stood to see what had happened. People yelled for the driver to stop, but the bus continued on. The passengers were speaking loudly in Ugandan, and were obviously upset that nothing was being done. Diane feared a riot would break out. After much shouting, it took an off-duty Ugandan army member walking to the front of the bus to get it to stop. The assistant driver came to the rear of the bus to see what had happened, then returned to his seat. The bus continued on.

When we reached the next village, the bus stopped. The injured man was helped to the front of the bus, but collapsed twice in the aisle, in obvious pain. He was taken into a pharmacy, probably the closest thing the village had to a medical facility. While we waited, a Catholic nun who was seated near us stood and approached Diane. She asked if Diane was alright. Diane replied, “Yes”, and then asked if the nun was OK. She rubbed the crucifix around her neck and answered, “I’m praying”.

While we waited, villagers sold grilled meat on branches to the passengers through the windows of the bus. As darkness fell, the injured man was helped back to a seat near the front of the bus, trading his previous seat with some other brave soul. We continued through the dark, and into the mountains.

We arrived in Kabale at 11 PM, over twelve hours from the start of our journey, having completed what was supposed to be a six hour bus trip. Diane didn’t use a restroom for the entire period, which wasn’t a problem given how much we were sweating. We found a room at the fourth hotel we tried, which was good because there were only two others in town. Diane was already working on her strategy to convince the taxi driver to take us home and let us sleep on his floor.

Patrick’s Comment — Throughout this trip, Diane maintained a particularly positive attitude, coping with the heat and stress exceptionally well. She even joked along the way. I think she’s got this traveling thing figured out.

6 thoughts on “The Bus Trip”