We entered into Zimbabwe by walking across the bridge over the Zambezi River just downstream of Victoria Falls. We walked into the town of Victoria Falls, which seemed deserted relative to the bustle of activity on the Zambian side of the falls in Livingstone. All of the gas stations and many of the shops were closed. What remained open was a grocery store, a couple of restaurants, several tour booking agents, and some curio shops. Everything that remained open was there to serve the few remaining tourists, which were sparse. The guest house we stayed at, once a happening place for overland trucks and backpackers had only six guests including us. Most of the other hotels were either closed, or had a similar occupancy rate.

Despite this, the people were friendly, and we felt safe walking the streets. It was possible to see that this was once a thriving tourist town, and before that, a jewel in the prosperous British colony run by Cecil Rhodes (the ‘Rhodes’ in ‘Rhodes Scholar’), leader of the British South Africa Company.

We saw the rest of Victoria Falls from the Zimbabwean side. It was similarly spectacular, with water levels so high that it was difficult to see through the spray and mist.

We visited the Victoria Falls Hotel, once an opulent destination for wealthy Britains and royals. It is somehow still being maintained in its colonial splendour, despite the lack of tourists. 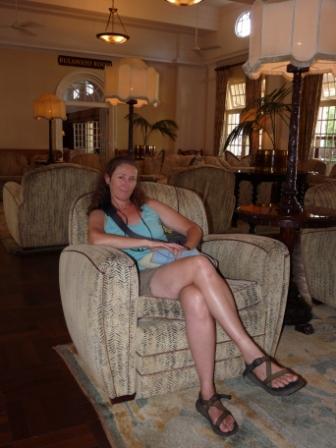 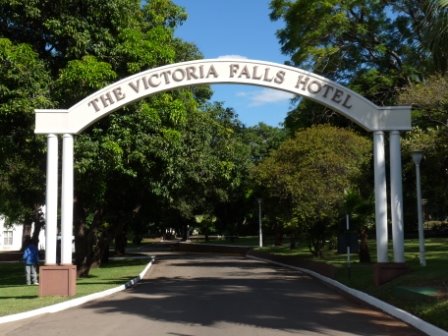 In Victoria Falls, Diane and I also went for a walk with the local lions.

Yes, they’re real lions, with fangs and claws intact. But no, they’re not wild. They are part of a program to breed and reintroduce lions to many parts of Africa. Walking with the lions is part of Stage 1 of a four stage process that, over many years, will be able to develop prides of truly wild lions that can successfully hunt, breed, and survive in the wild with other lions and predators. Having tourists interact with select lions brings in an essential source of money to fund the program, and is done in a respectful and humane way.

We walked with two lions, a brother and sister, aged 19 months. Although they’re only teenagers, they seemed pretty darn big to us. The whole event seemed very mellow, until they gave us the safety talk, and asked us to sign the waiver. They told us that lions were very inquisitive, and might be fascinated with anything that dangled from us, like camera bag. At this point, Diane took off her earrings and put her hair up.

We were told to walk in single file, and not fall behind. We were instructed to walk behind the lions, and not to touch them in front of the shoulder. If they rolled over, we were to step away. We were each given a small stick, completely inadequate to defend against a lion. If a lion came directly at us, we were to raise the stick, and firmly say “No cub”. They didn’t look like cubs to us. 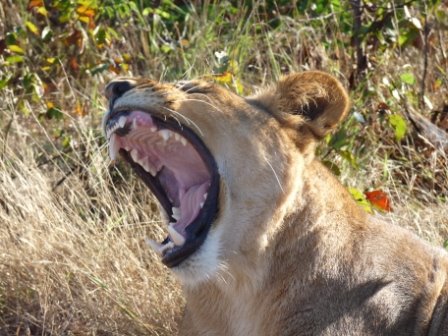 We walked with the lions for one hour, and had the opportunity to stroll beside them, and touch them as they paced and as they rested. For the record, lions look relaxed, but they walk quickly. They were just like Doobie and Skyler, but one hundred times bigger and infinitely more dangerous.

Before we went to Zimbabwe, Diane was very nervous. Her thoughts now? Victoria Falls is a nice place to visit, but I wouldn’t want to live there. It was like an old west ghost town. You could tell that it once was a thriving community, but it’s lost its luster. It is still alive, and things are improving. Not only are more tourists required, but money and time will be necessary to restore it to its former glory.