If you’re looking for a fast marathon in a foreign land, I can recommend Berlin.  It’s one of the 5 major world marathons in addition to London, New York, Chicago, and Boston.  And, since we were planning to come to Europe at this time anyhow, we couldn’t pass it up. 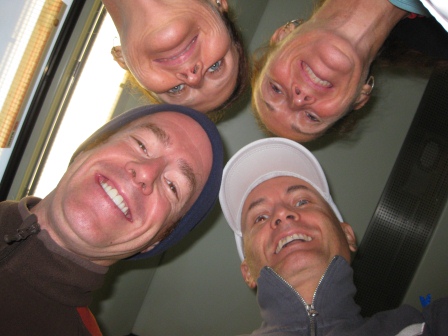 My left knee has been swollen for the last 4 weeks (since Ironman), so I’d only run once in the month leading up this marathon, less than ideal training.  So it was with some trepidation that I toed the start line this morning (actually hundreds of meters behind the start line in corral ‘G’ which is in the second starting wave).  Our start was at 9:10 AM, a very civilized starting time, at least an hour later than we’re used to.

Give our lack of preparation, Diane and I chose to run together, as we did in New York in 2006.  The course was pleasant, entirely urban with few long straightaways (which psychologically mask the distance) and very flat.  Berlin was originally built on a swamp so the biggest hill was about 3 meters high (only 10 feet!) to surmount the low bridges which cross the rivers and canals.  The route passed by many of the major sights of Berlin, including areas of both the former East and West Berlin.  The event was well organized with a great start and finish location in a big city park (the Tiergarten) with frequent water and food stations.

The weather was pleasant – a high of 22 degrees Celsius.  Anticipating a tough race, Diane and I drank water at every water station.  We took gels starting at 1 hour and often thereafter, knowing that we’d need every ounce of energy we could get.

At about 15 kms, my right leg developed a will of its own.  Note that this is not the leg which had been bothering me for weeks, which had hurt initially but was pain free and rock-solid after 3 kms.  Despite my best intentions, I was regularly scuffing my right foot on my step-through, and occasionally catching my toe.  Obviously something was out of whack with my stride.  This led to increasing pain in my right knee, which was in full swing by kilometer 20.  At one point I had a sudden sharp pain in this knee and it almost collapsed.  Since it was so early in the race, I was worried and took some ibuprofen to temper the pain and reduce any inflammation.

By half way through the race, both Diane and I had growing stiffness and pain in our thighs, probably the result of insufficient recent training.  To make matters worse, as the race went on, more and more of the spectators stood on the sidewalk in the sunshine drinking beer from bottles or steins, a particularly cruel form of runner harassment.

Diane ‘smelled the barn’ with 6 kms to go, and picked up her pace, perhaps a bit too soon.  The last 2 miles seemed to take forever.  500 meters before the finish we passed through the famous Brandenburg Gate, then into the Tiergarten to the finish.  Diane and I ran across the finish line hand-in-hand with arms upraised.

Another thing unique about Berlin is that they serve beer at the finish.  Alcohol-free beer, but beer nonetheless.

Drinking near beer at the finish

We capped our day by going out for dinner with a contingent of Canadians from our running group.  Italian food with, you guessed it, more beer. 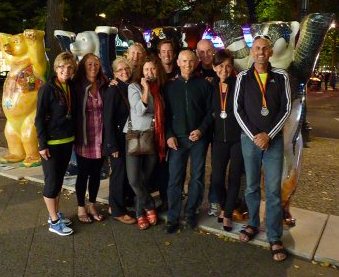