Elisabeth was born in Hungary but moved to Germany when she was 4 years old.  At the age of 14 she married Ludwig, a wealthy and powerful man.  Despite this, she lived a simple life and spent her time helping the poor and the sick.   She donated a lot of money to good causes, including the establishment of several hospitals.  One of these hospitals was built nearby her home, and she would volunteer her time there including doing the dirtiest of jobs.

Against her husband’s wishes, Elisabeth often took bread to give to the poor of the nearby village.  One day her husband came across her carrying what he assumed was a basket of bread.  He asked her what was in the basket and she replied, “roses”.  When she opened the basket, the bread was indeed roses.  Her husband, a religious man, took this as a sign of God’s approval of her good deeds.

Elisabeth’s husband died on a trip to Itaiy.  She moved with her three children into a convent and spent the rest of her days there helping the sick and the poor until she died — at the age of 24.

And here is the rest of the story… 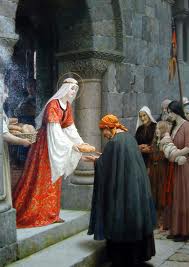 Elisabeth was born on July 7th in the year 1207.  Her full name was in German was Heilige Elisabeth von Thüringen.  She was the daughter of Andrew II of Hungary and Gertrude of Merania, and at age four was brought to the court of the rulers of Thuringia in central Germany, to become a future bride who would reinforce political alliances between the families.  In 1121 at the age of 14, she married Ludwig, the same year he was crowned Ludwig IV, and the marriage was by all accounts a happy one.  She lived in Wartburg Castle (which we visited yesterday) above the present-day town of Eisenach.   She and her husband were devout Catholics and she patterned her life after Francis of Assisi, whom she learned about from Franciscan monks.   Her husband died of plague in Otranto, Italy on his way to the Sixth Crusade and his remains were returned to her the following year.  She moved with her children into a convent where she continued to help the sick and the poor until she died at the age of 24 on November 17, 1231.  Elisabeth is today known as St. Elisabeth after being canonized by Pope Gregory IX in 1235.

What struck me about this story is that a teenager, despite having money and power and in addition to having 3 children, would devote her life to helping the poor and sick.  This was very unusual in her day as it is today.  And how sad it was that she only lived to age 24.