We rented a scooter and headed north out of the popular backpacker hangout of Vang Vieng in Laos. Thirteen kilometers later, after passing through several poor villages, we turned off onto a dirt road. We were following the hand drawn map provided by the young woman who had rented us the scooter, sans insurance or helmets. After about 800 meters of red dirt road punctuated by mud puddles we arrived at the bank of the Nam Song River. Here we found a man willing to watch our scooter for 5,000 Kip (under a dollar). This wasn’t really necessary, but we felt it a wise investment at that point, thinking that paying money might avoid an unfortunate ‘accident’ from befalling our only transport home. Diane thought it was a ‘parking fee’, but there was no shortage of space to park along the river bank, so it seemed more like a protection racket to Patrick, who begrudgingly paid the fee. We crossed the river on a small bridge covered in woven mats.

Using the bridge cost us 5000 Kip each (death by a thousand cuts!), but one used to have to pay a boatman before the bridge was built, and the return trip across the bridge was included.

We arrived in a small village, home of Tham Sang. ‘The Elephant Cave’ is in a small rock outcropping at the end of the village. There is a large Buddha statue inside and a rock formation that really looks like the front of an elephant, tusks and all.

We walked on, picking our way through the rice paddies and following trails through the jungle, heading in a generally north westerly direction, looking for another cave called Tham Hoi. We started following some locals that we thought might be going in that direction, but they stopped and sent us back. Tham Hoi is a long thin cave that goes three kilometers underground to a lake. It has a generally level floor of mud, not smelly, but slippery in places. It didn’t have the smell of bat guano which is now familiar to us. The interior of the cave was filled with stalactites and stalagmites, and many formations that looked like melting candle wax. The cave is completely dark once you progress away from the entrance and we were all alone. We went in a few hundred meters using our headlamps before Diane decided that it was time to turn around. 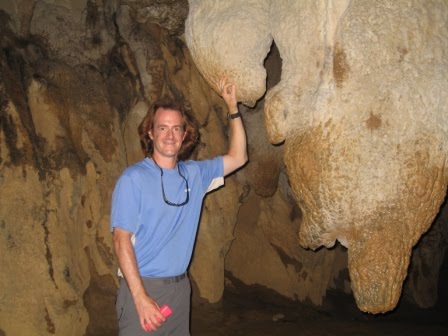 Nearby Tham Loup is a cave reached by climbing up the lower reaches of the cliff then descending some wooden stairs into a cavern in the darkness. There were two guided groups deeper in the cave which we could sense from their distant voices and lights. At the rear of the initial cavern it was possible to climb through some tight squeezes to another cavern behind. Diane was a bit freaked out because this cave had a slippery floor with occasional jagged holes waiting to swallow us up. Tham Loup was very pretty inside, but had sustained some damage from previous visitors. We followed the faint lights and voices of the other groups, but we struggled to keep up. Patrick was concerned we’d get lost and Diane was just about to panic. Fortunately the rear chamber had another exit that looped back to the first cavern, and we found our way out unscathed.

Our final cave, Tham Nam, known as ‘The Water Cave’, was about half a kilometer away and was a bit of a surprise. It has a wide, low opening with a tributary of the Nam Song running from it. For a small fee we rented inner tubes and waterproof headlamps from a young woman who lived nearby. Each headlamp looked like a torture device, with a large, heavy battery worn on a string around the neck, and wires running up to the light attached to the head with a tatty old bit of elastic. The batteries had exposed contacts with bare wires twisted around them, which was disconcerting because they lay balanced on our chests as we pulled ourselves on the tubes through the low entrance and into the darkness.

We made progress against the current by going hand-over-hand on a rope. The cave was about fifteen meters across and one meter high, cut from the rock by the water over the eons. Diane led the way as we tugged ourselves upstream and into the unknown. 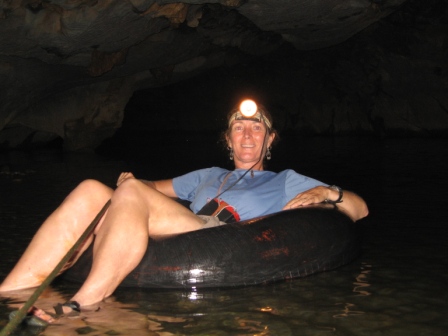 Eventually Diane reached the end of the rope. We thought perhaps that we’d missed something, but found that the water was now shallow enough to walk. The cave roof was not high enough to stand so we splashed upstream bent over at the waist.

We found a small piece of dry ground to leave our tubes on, hoping that they wouldn’t wash away before we returned, which would result in a rather scary swim. The roof gradually lowered to the level of the water, and the river rushed from under the wall, so we turned around. On the return journey we just floated downstream, waiting for the sunlit opening to appear. Diane thought that she’d be most freaked by this cave, but it was the one that she enjoyed the most.

Overall, we had a very enjoyable day. Diane recently said that we haven’t had as much ‘adventure’ on our trip recently. Her comfort zone must surely have expanded on this trip if this isn’t exciting enough for her! Perhaps she just recovers quicker.