Welcome to the home of the $8 pretzel and beers big enough to sprain your wrist. The ultimate getaway for the beer lover, Oktoberfest is a huge spectacle. It wasn’t what I had expected — it was better! Oktoberfest is a dynamic blend of beer gardens, dinner theatre, a costume party, and a carnival, all mixed together with a history of rich tradition. 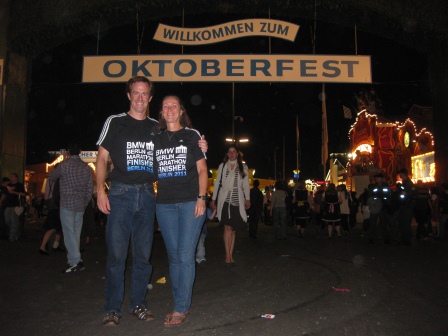 Oktoberfest began in 1810, when Crown Prince Ludwig was married to Princess Terese of Saxony-Hildburghausen. The people of Munich were invited to attend the festivities held on the fields in front of the city gates to celebrate the happy event. The fields have been named Theresienwiese (“Theresa’s meadow”) in honor of the Crown Princess ever since, although the locals have since abbreviated the name simply to “Wies’n”, a term that they also use to refer to Oktoberfest itself. The festival was eventually prolonged and moved ahead to September to take advantage of better weather conditions.

Oktoberfest is a 16 to 18 day beer festival held annually in Munich, Bavaria, Germany running from late September to the first weekend in October. It the world’s largest fair and an important part of Bavarian culture, having been held since 1810 (202 times less 24 when it was canceled due to cholera epidemics, inflation, or war). Even better, starting this year, all beer tents were non-smoking.

The Wies’n is a huge paved area (103 acres) located near Munich’s center and is filled with midway rides and food stands. On either side of the main thoroughfare are 14 large ‘tents’ (each the size of an ice hockey arena) and 20 smaller tents. The tents, though impressive, are non-permanent structures which are constructed for and only used during the festival. Inside each of the tents are hundreds of tables jammed with thousands of people (including yours truly) drinking, eating, and singing their hearts out to the strains of live bands. Each of the tents has a unique flavour, with some more traditional and others more modern. In total there are approximately 100,000 seats for beer lovers to fill, and yet it’s still hard to get one.

Each year over 6.5 million visitors attend Oktoberfest, drinking over 7 million litres of beer (someone must not be drinking their share because my table drank a lot more than that!) In support of this massive beer bash are over 1000 toilets and 900 meters of urinals.

Many people, including a lot of tourists, sport traditional Bavarian clothes, lederhosen (leather pants) for the men and dirndl dresses for the women. During Oktoberfest (and even at other times of year) these traditional outfits can be seen being worn (and can be purchased) throughout Munich.

Only beer which is brewed within the city limits of Munich is allowed to be served at Oktoberfest. There are problems each year with young people who overestimate their ability to handle large amounts of brew. Many forget that Oktoberfest beer has 5.8 to 6.3% alcohol and a high sugar content (compared to an average of 5.2% alcohol and low sugar content in regular German beer), and they pass out. These drunk patrons are referred to as ‘Bierleichen’ (German for ‘beer corpses’). 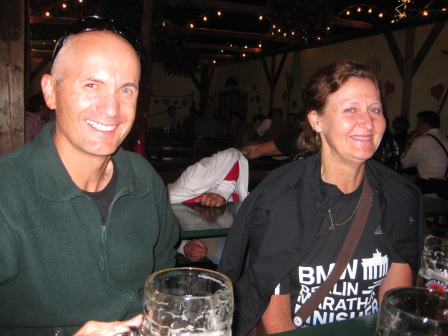 The guy throwing up behind my friends

After an unsuccessful Oktoberfest foray the night before, where we were unable to secure a seat in the packed main tents and instead drank a beer in the outdoor seating of a small satellite tent where a stranger threw up under the table behind my friends, we were more prepared and committed for the next evening’s sortie. We arrived in mid-afternoon and established our position at one of the prized tables in the unreserved seating areas of a popular tent. It is necessary to maintain one’s station and defend it against the waitresses who attempt to pack more people onto their tables in an effort to inflate their revenues, and from latecomers who troll the rough wooden floors of the hall seeking a seat. It also requires significant stamina as our beer drinking began around 3 PM and continued unabated for over 7 hours! 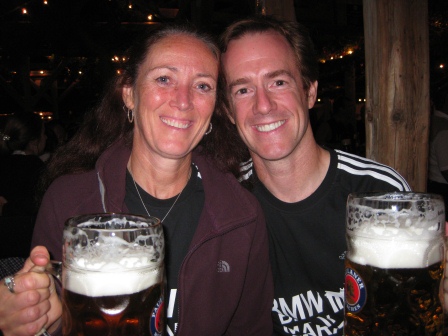 After an over-priced and unsatisfying meal of white sausage (Weisswurst) and sauerkraut shared with a friend, the band, seated on a large pedestal in the center of the tent, started playing the classic Oktoberfest tunes and a few new favorites. We stood on the benches more than we sat, pressing the flesh with the people on the tables behind us in a careful balancing act (kind of like an elevated mosh pit in lines). We belted out German songs we didn’t understand with people we didn’t know. For one night we relaxed and got silly with strangers. 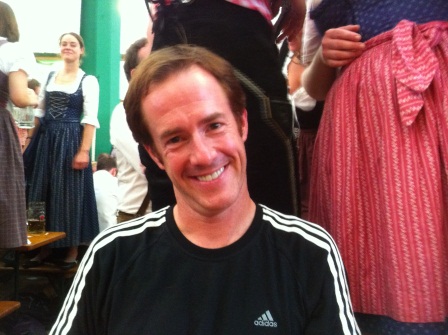 Most of the German songs are silly pop tunes from obscure bands, or old drinking ditties. Things that are catchy and easy to remember for singing along. They also sing some English songs, the variety and quality of which will give you an idea of what the German songs are like – Living Next Door to Alice (Smokie, 1976), I Will Survive (Gloria Gaynor, 1979), Country Roads (John Denver, 1971), Y.M.C.A. (Village People, 1979), Hey Baby (Margaret Cobb and Bruce Channel, 1961), Sweet Caroline (Neil Diamond), Mambo No. 5 (Lou Bega, who was actually born in Munich!)

The shortest song and the one you hear most frequently is called “Ein Prosit”. The song ends with everyone standing and drinking. It is sung about every 15 minutes in order to keep the patrons well lubricated. The lyrics (translated to English) are “A toast, a toast, to the coziness of it all. Repeat. One, Two, Three – Drink Up!” Apparently it has more meaning in German, evoking feelings of social acceptance, belonging, being cheery and leaving your troubles at the door. 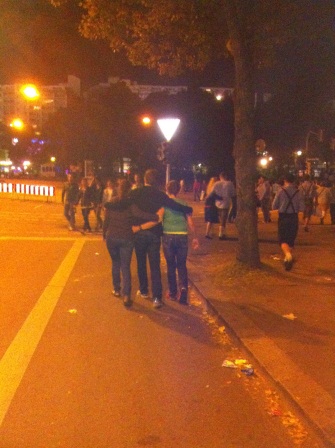 We get by with a little help from our friends

After many litres of beer, I stumbled out of the tent after 10 PM for the lengthy walk and tram ride back to the other tent where we were staying. The next morning while sitting in the restaurant feeling pleased that I wasn’t feeling worse, I was greeted by a young woman who said, “hello”. I didn’t recognize her but politely responded in kind. She then turned to my wife Diane and said, “He doesn’t remember me, does he?”

We’d been warned by some people (German and others) that Oktoberfest was too touristy and that we’re more likely to be sitting with Japanese tourists than Germans. Although there were a lot of tourists, most of them were German tourists, and we had a good time. The whole event seemed very authentic, even more so after a couple of beers.

Patrick’s Note – Attending Oktoberfest was one of the things on my Dreams List (also known as a ‘bucket list’). With no idea how or when it might occur, I wrote it down several years ago and now it has happened. Dream Big!