Flamenco and bull-fighting are perhaps the two biggest symbols of Spain, the things that come to mind when people think of this country.  We knew that we wanted to experience flamenco, as most tourists do, and saved this event until the city of Seville in the south of Spain, the Andalusian region where flamenco originated.

After purchasing our tickets the night before, we arrived at the small Los Gallos theatre early to get good seats.  The maximum capacity is 120 people but this being a night in early December with the 2011 Davis Cup tennis tournament on television (happening right here in Seville), the audience was small, only about 20 people.  Our waitress told us that if it wasn’t for the tennis, there would be almost no tourists in town at this time of year.

The room was simple.  A small stage, about 5 meters wide by 3 meters deep.  On it, 3 wooden chairs with wicker and an anvil standing in the rear corner for decoration.  On the back wall of the stage was a course painting of a cock fight in red and black.  At the left rear of the stage, a tiny twisting staircase disappeared upwards.

We ordered Sangria, sweet and fruity, the first we’ve had in Spain, which sat on the little table in front of our small and closely packed seats.  They were lightly padded and comfortable enough given that there was nobody on either side of us due to the small crowd.

The lights dimmed.  A guitarist and two male singers dressed all in black took the stage.  It began with just guitar, only rhythm, with the strings muted.  Soon the men started to clap a tightly controlled rhythm, like a syncopated metronome.  Every clap was sharp, clear, and precise.  They emphasized certain beats by tapping or stomping their heels on the wooden floor. The guitar began to ring, alternating between pulsing strums and fast picking, always keeping to the cadence of the hands and the feet.

A beautiful young woman descended the stairs.  She was dressed in a long, green dress, tight down to the hips, then extending in a cascade to a ruffled train of over a meter.  She raised her hands in the air, assumed a striking posture, and began to move.  She was very controlled at first, with the smallest of arm movements and tiny pulses of feet barely visible beneath her dress. 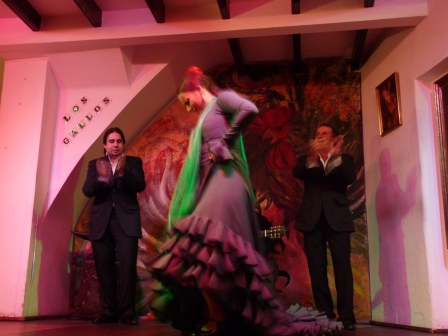 Her hands were posed, her fingers long and painted.  They transitioned meticulously from one beautiful position to the next, moving about her wrists independently.  Occasionally, her fingers would snap in rapid succession, as if she had more fingers and more snap than normal.

As the music grew, she moved across the stage, twisting and turning, always maintaining a strong stance.  Her posture was exaggerated and dramatic yet continously appealing, like an athlete transitioning powerfully from one elaborate model’s pose to the next.  With curved back, extended leg, and raised arms she seemed like lion about to pounce.  Her dress swung about her, not haphazardly, but carefully managed through a series of kicks and spins.  Sometimes the full train wrapped around her feet tightly yet she always extricated herself gracefully.  Her face changed expression to match her movements.  Sometimes so strong as to appear angry and intimidating, the next playful or warm or contented.  Her carriage, poise, and attitude exuded passion. 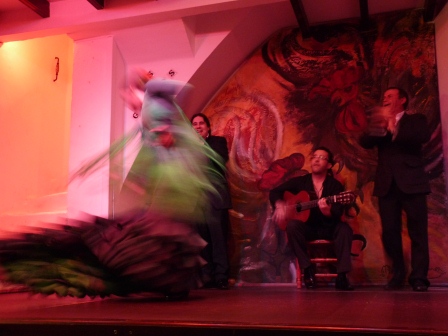 The singers grew louder.  Their voices were strong, sometimes surprisingly so, and they pushed the pitch higher, straining each breath to the end in a plaintive wail, an aching cry tinged with longing and desire.

The rhythms were complicated in structure, mesmerizing in effect.  The performance was elegant and controlled yet shocked by periodic explosions in the dance, or the rhythm, or the voice.  It gradually built towards a crescendo.  The result was powerful, exotic, and passionate.

The other guitar players, singers, and dancers were equally impressive and enticing.  We were entranced and would highly recommend this experience. 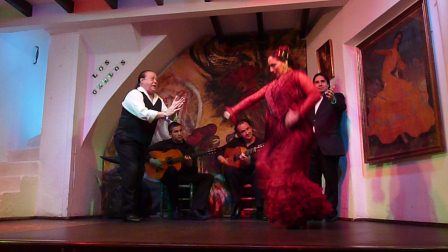