Today is my birthday. It is also the 15th anniversary of the first day of the genocide that took place in Rwanda in 1994. On this day, one group of Rwandans began killing another group, and within three months over one million people had been murdered.

Outside are the mass graves of over 200,000 people. No individual markings. Just huge cement blocks, each covering the combined remains of tens of thousands of people.

This morning we went to the national memorial service in a suburb of Kigale. Along with tens of thousands of Rwandans, we listened to speakers and singers share their perspective on the genocide. Much of it was in Kinyarwanda, the Rwandan language, but some parts were in English. The feeling and the intention was self-evident.

First was a man missing an arm who gave his testimony. His wife stood by his side while he spoke. Giving testimony is an important part of the healing process for victims. 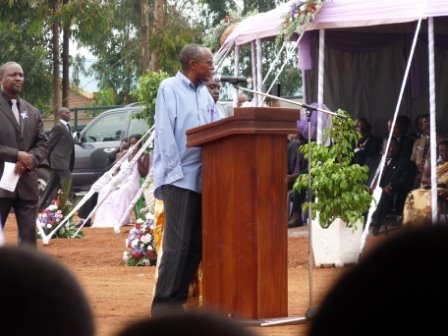 An American man who lived in Kigale at the time of the genocide spoke. He explained how he and his wife made the difficult decision that she and their children would leave the country for safety, but that he would remain. He explained how ordinary, unarmed Rwandans stood at his gate, and protected him from men armed with guns and machetes, using words alone. They spoke the names of the armed men they knew, and talked of how they knew one another, and how their children played together. In this rare case, it was enough to keep them alive. In most cases, it wasn’t. Now the American man speaks to hundreds of American school children each week, educating them on the horror of genocide.

Paul Kagame, the President of Rwanda, spoke of the need to continue to move forward, and to build a new future for Rwanda. He also spoke about the need to remember, and the people who try to deny that the Rwandan genocide occurred, or who claim that Rwanda now exploits the guilt of the world to its benefit.

Many people in the audience were crying. For those who lived through it, who were injured, or who lost loved ones, the genocide is still very recent and very real. What I wasn’t prepared for was the screams. Some people’s anguish was so great that they began to wail. Many were helped away by Red Cross medics or other attendees. This was not isolated, and overlapping cries of anguish continued throughout as a tormented accompaniment to the proceedings.

This week is an annual week of remembrance in Rwanda. Each day work stops at noon, and communities come together to talk about the genocide. There is a different theme each day. How to build a better future. How to make sure this never happens again. How to help the many children who were left parentless, and who, even today, continue to lead their households.

I knew that a genocide had occurred in Rwanda. I had no appreciation of how horrific it was. I still don’t understand how a country of nine million people that murdered one million of its own citizens can move on. Many of the people who live here participated in the genocide, people who we interact with each day. Many others did nothing to try to stop it. All are guilty, but only a few can be prosecuted.

There are many victims here. This is visible in the many people with disabilities and scars that we see on the streets, and in the faces of those who have injuries other than physical ones. They are the ones who survived. Somehow they continue on, co-existing with their neighbours who tried to kill them, or who abandoned them. How they can get up everyday, and go about their business, and look into the eyes of those who murdered their families and friends is something that I have great difficulty understanding.

There are other genocide memorials in Rwanda. A church where ten thousand people were murdered. A school where hundreds of students, including many small children were killed. In this case, as if to ensure that no one can ever deny the genocide occurred, the bodies of the victims including the children were left in place, covered with lime to preserve them. We decided not to go to these places.

It was a difficult way to spend my birthday, but I’m glad to have been here.

For those who don’t know the history of the genocide in Rwanda, there is a brief summary below.

Rwanda was a German colony until its defeat in World War I, when it was granted to Belgium. The Belgians played on ethnic differences to divide and conquer the population. Based on questionable religious and anthropological theories, they divided the population into two main tribes – Hutus (‘hoo-tooz’), the majority of about 85%, and Tutsis (‘toot-seez’), the minority. In some cases, the assignment was done based on the number of cattle a family owned. The Belgians concentrated power in the hands of the minority Tutsis, to keep control over the Hutus. After Rwandan independence in 1962, the Hutu majority came to power, and retaliatory policies were introduced to put restrictions on Tutsis. Inter-tribal tensions continued, with periodic outbreaks of violence. In 1990 a civil war erupted between factions drawn along tribal lines. This continued until a ceasefire and power sharing agreement was being established by the President of Rwanda in 1994, but some in the Hutu majority were dissatisfied with this.

On the Rwandan President’s return from a peace conference on the night of April 6th, 1994, his plane was shot down while landing at the Kigale airport. Extremists among the Hutu dominated political and military ranks began to execute a well-planned final solution to the Tutsi issue. On April 7th, the moderate Hutu Prime Minister was also murdered along with ten UN peacekeepers from Belgium, prompting Belgium to withdraw its troops entirely, thereby making it possible for the genocide to begin.

Rwandan army and Hutu militia groups called ‘Interahamwe’ began a systematic campaign of looting, torturing, raping, and killing Tutsis across the country. Tutsis were executed wherever they were found by shooting, but more commonly with machetes or clubs, along with any Hutus suspected of sympathizing with them. Tens of thousands were murdered each day, and the streets piled up with bodies. Those who took refuge in schools or churches were executed nevertheless; in some cases whole churches were detonated or burned with people inside.

The United Nations Assistance Mission to Rwanda (UNAMIR), led by Canadian Lt. General Romeo Dallaire was present, but was powerless to stop it. Despite his warnings and requests for assistance from the UN, he had only 250 volunteer peace keeping troops from Ghana, and was under orders not to use deadly force. The world did nothing to intervene, despite clear evidence that a genocide was occurring.

The focus on exterminating the Tutsis was the Hutus undoing. The Tutsi dominated Rwandan Democratic Front (RFP) took advantage of the anarchy to counter attack, and pushed the Rwandan military and Interahamwe out of the country. This was done by a small minority against overwhelming odds, without any assistance from the international community.

Rwanda was devastated by the civil war and subsequent genocide. Bodies had to be buried quickly in mass graves. Dogs had to executed on mass because they had developed a taste for human flesh. There were hundreds of thousands of injured, orphans, and refugees.

Justice is being sought through an international court established in Arusha, Tanzania (also the home base for our Kilimanjaro climb in June). Due to the large number of perpetrators, local tribunals called ‘gacaca’) have also been adapted in a unique form of community justice. Many of the guilty escaped the country, but many remain. Because so many Hutus (men, women, and children as young as ten) participated to a lesser extent, as a practical matter, they will remain unpunished.