Diane’s aunt arranged for us to visit a school yesterday in the nearby slum. The director of the school is a friend of hers, and the slum is called Soweto (no relation to the slum by the same name in South Africa). Soweto is home to about 25,000 people. The school is a ‘private school’ only in the sense that the government did not build the school, nor does it provide any funding for its operation. There are 160 students from ages 3 to 14, and six teachers. 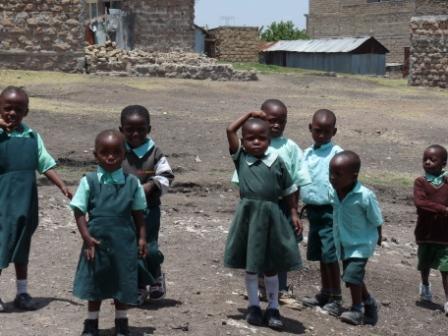 The school is housed in the facilities of a church, which are indistinguishable from the surrounding homes. I would not have known that it was a church or a school if I had not been told. The classrooms for the senior grades are about 10 feet by 12 feet, each of which accommodates the teacher and more than 20 students crammed together on shared benches and plastic chairs. There are no desks.

We did not want to arrive empty handed, so we purchased a 20 kg bag of rice, to supplement the school lunch program, and we delivered 160 bananas on behalf of Diane’s aunt. By the time we’d walked the 15 minutes to the school with the director, carrying about 80 pounds of food, we’d already had a good workout. Each day, the school tries to provide a basic lunch for the students. In many cases, it is the only food they will receive that day. Lunch is usually ‘ugali’, a paste made from only corn flour and water, with some boiled vegetables. If they are lucky, they get rice instead of ugali, but there hasn’t been money for rice recently.

The headmaster, who has been in the role for five years, is a young man. Both he and the teachers attended two years of teacher college. Neither the headmaster nor the teachers have been paid in months, as the only school funds are used to provide food for the children.

The headmaster took us on a walking tour of Soweto, including his home, and the home of one of the school’s parents. The homes are made of rough bricks, covered with tin sheets. Each home is a single room of about 10 feet by 10 feet, with a curtain dividing the sleeping area from the remainder. The homes are clustered together in groups off shared narrow corridors, which are choked with hanging laundry. Each has a heavy steel door with a padlock, although there isn’t much of value inside. The people on the uneven dirt streets of Soweto seemed a bit surprised to see us, but they were friendly. 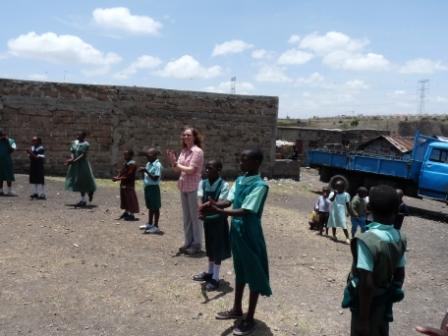 After our walk, we joined some of the senior students for physical education. About 25 kids stood in a circle on a small piece of vacant land, dancing and playing games. Everything they did was accompanied by a song. Yes, Diane and I both danced solos, but our singing was limited due to the fact it was mostly in Swahili. 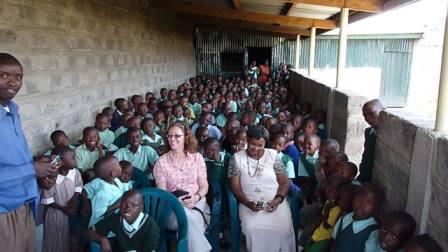 We headed back to the school’s ‘dining hall’, which was an open-air lean-to off the side of one of the buildings. All 160 students plus teachers crammed into the small space with us. The headmaster called all the teachers to the front and introduced them. Patrick repeated their names as each one was introduced, but not one of them looked us in the eye. We learned later that doing so may not be considered polite.

The headmaster introduced the students, who then performed for us in the almost non-existent space left in the dining hall. Two groups of students presented poems to us that they had memorized. Three individual students presented a memorized verse from the Bible, with the length of each of their memorized introductions exceeding the length of their verses. A senior class sang us a song in English.

The Director introduced us. She spoke about how fortunate they were to have us as guests, and how we had brought rice and bananas. She spoke about how other businesses and guests had made donations, and pointed out the things they had donated. The cover we were standing under had been donated by a cell phone company, and one of the bathrooms by a Canadian woman. The whole slum of Soweto receives water only intermittently, and the water tank which stores water when it does come, was also donated.

Patrick spoke briefly. He started with few lines of carefully memorized Swahili, which drew blank stares. Perhaps he didn’t have the accent right. He then talked briefly about where we were from, and some of the differences between Kenya and Canada. The headmaster translated everything into Swahili, as many of the young ones don’t have sufficient English yet. Then Diane led everyone in a kids song with some actions, which seemed to go over well. 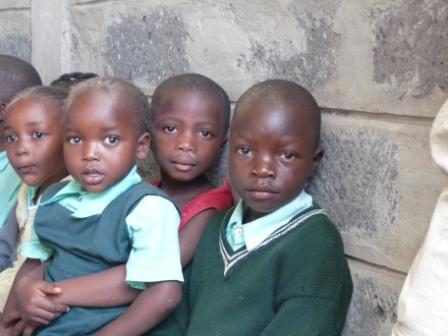 In preparation for lunch, the young children washed their hands in a large shared basin of water, without soap. Each student received their ugali, vegetables, and either one-half, one, or one and a half bananas based on their age. Diane assisted with serving the food, in a small dark kitchen where the food had been cooked over a charcoal fire. The school has no electricity or gas. Many of the children had not eaten since the previous day, yet every one of them waited until a simple grace was said before they touched their food.

We said our farewells to the students, and were accompanied by the headmaster and Director to the edge of the slum, where a broken bridge crosses a polluted stream.

Recurring visions of the students keep coming back into our heads…

10 thoughts on “Head of the Class”