Livingstone is the city on the Zambian side of Victoria Falls, the largest and most famous waterfall in Africa. The falls are a major tourist attraction, and are a highlight of many people’s journey to ‘the dark continent’. Victoria Falls is about one kilometer across, where the entire Zambezi River drops into a gorge about 400 feet deep.

We arrived in Livingstone after crossing, from east to west, almost all of Zambia by bus in a single day. It was dark when we arrived, but our preferred guesthouse was only a couple of blocks from the bus stop. Unfortunately, it was full, so we found a local guesthouse (i.e. no tourists) where we got a room, with shower, for about 70,000 Kwacha (about $12 US). We switched rooms for each of the next two nights, eventually ending up in the ‘honeymoon suite’ at Jollyboys Backpackers, a thatched cottage with a double bed, a mosquito net, and a shared shower and toilet about 50 feet away in the main building. We either need to resign ourselves to getting up once or twice a night, or curtail all beer drinking by 6 PM!

There we met up with Mark and Chloe, the young couple who survived the hair-raising hitchhiking experience, and who only had a single day to spend in Victoria Falls. They were booked on the infamous Victoria Falls sunset river cruise that evening, so we agreed to join them. Later in the day, we met up with Bart and Evelyn (the Dutch not-really-a-couple who we’d spent time with in NKhata Bay, Malawi). They signed up for the all-you-can-eat-and-drink in two hours booze cruise also.

We first visited the falls around mid-day. The recent rainy season has had the highest rainfall in 40 years, so the falls are running more powerfully than they have in many decades. They are quite spectacular when viewed from the side of the falls, where the view isn’t masked by the spray that shoots up from the bottom of the gorge. 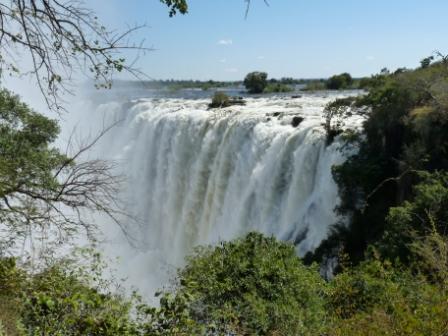 As you progress from the side to the edge of the gorge opposite the falls, it becomes progressively wetter. Many people rent a rain poncho. We decided on a different approach. 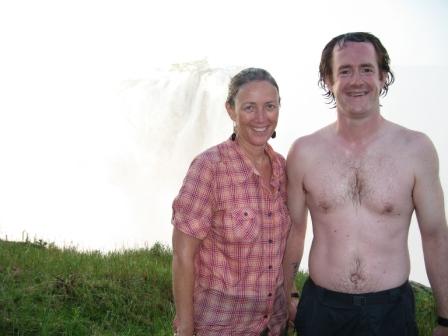 It quickly becomes very wet — more like swimming than walking in the rain. The water is so powerful that it ricochets more than 400 feet from where it impacts at the bottom of the gorge, and sends clouds of moisture an additional 200 feet into the air, above the level of the top of the falls. The water falls back to earth in a heavy, drenching rain, and as the trail gets close to the edge of the gorge, is augmented by sheets off spray blasting up from below. It’s the best shower we’ve had in Africa! 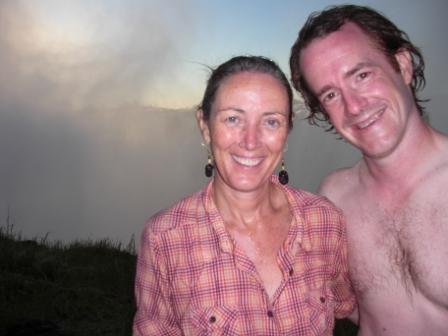 Later that day, on the sunset cruise, we met a group of four recently graduated British doctors who had just completed their residency in Zambia. The pontoon barge put in upstream of the falls, and was equipped with a single outboard motor. I briefly wondered what they do if the motor fails, but quickly washed that thought from my mind with a couple of gin and tonics. The body count was as follows. The names have been removed to protect the innocent, but none of them was Diane or Patrick, who had been warned by a man with a broken leg that had been on the cruise a few weeks earlier, and who sustained his injury while jumping from a moving vehicle after the event:
· one woman had to be sent home early, carried back to the bus by Patrick
· one British woman was taken back to our guesthouse bar by two of her three friends, where they needed to rescue her from the arms of two different men
· one British man was missing action. We knew that he’d made it to shore, but after several searches he couldn’t be located, and his friends went back to town without him. He made it back safely in the middle of the night after waking up alone in the darkened men’s bathroom of the outdoor beach club where our boat docked. He had the highest concentration of mosquito bites that we’ve ever seen, but only on the side of his face that wasn’t pressed against the wall as he slept.

The next day, we were surprisingly not hung over. Perhaps it was our regular training regime of afternoon and evening beers? So, we headed to the bridge over the Zambezi which forms the border between Zambia and Zimbabwe, and exists in the no man’s land between the two border posts. It is possible to head out onto the bridge, without officially leaving Zambia, to enjoy the view and the activities available there. 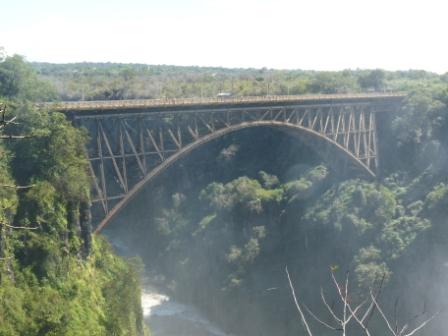 Patrick started off the Bungee Jump. 111 meters (about 350 feet) from the bridge deck to the bottom of the gorge. The third highest in the world. Four seconds of freefall before the bungee comes tight, which feels about two seconds too long when you’re doing it.

Then the Gorge Swing. Similar to the bungee jump except that you are attached to a static rope, not an elastic bungee, that is anchored at bridge level over 300 feet away to a cable crossing the gorge. The drop is the same, but at the bottom, instead of springing back up, you swing out in an arc. It’s more frightening than the bungee because you don’t dive, but merely walk off the side of the bridge and fall over 300 feet. 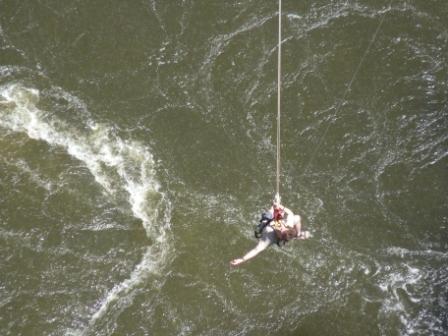 In both cases, after you stop moving, a guy is lowered from the bridge to retrieve you, and then you’re winched back up to a catwalk below the bridge. You then walk to the end of the bridge, up the bank on the Zambian side, then back out to the center of the bridge. Bart and Evelyn also did the bungee, but Evelyn stopped after that.

The triple feature was completed was a zip line across the gorge, from the Zambia to the Zimbabwean sides. This was the tamest of the three, and a nice relaxing way to wind up.

Our timing in visiting the falls was perfect, because the next night was a full moon. On the night of the full moon, the falls open again after dark, to experience something very rare – a lunar rainbow. On full moons with clear skies, a rainbow is visible when the light from the moon hits the mist above the falls. It’s much fainter than a regular rainbow, and less colourful, but it is clearly visible with the naked eye. Here’s a photo taken with a 30-second exposure in the darkness.

We had a great two days in Livingstone experiencing part of what Victoria Falls has to offer. In our next posting, we’ll fill you in the rest of it.

One thought on “Livingstone, I Presume”