Mount Sinai is in the center of the Sinai Peninsula, in eastern Egypt, which is located between Cairo and Israel, Jordan, and Saudi Arabia. It is a famous mountain for many historical reasons, and is where Moses received the Ten Commandments. Mt. Sinai is about 7000 feet high, similar to the tip of Blackcomb mountain.

We wanted to climb the mountain at night, to see the sunrise from the top. After spending the day wandering the beaches of Dahab, we left at 11 PM on a minibus with about ten other people who were crazy enough to do the same. They included a family of three from Mauritius, a couple of guys from Japan, one from Korea, two women from somewhere in Europe, and an Egyptian dentist.

We arrived at the trail head at about 1 AM. It was pitch black and bitterly cold. We brought every piece of clothing we had with us, each bringing two pairs of socks, two pairs of pants, two shirts, our fleece jackets, windbreakers, fleece hats, and gloves. Diane also brought a sweater. Collectively, they weren’t enough. 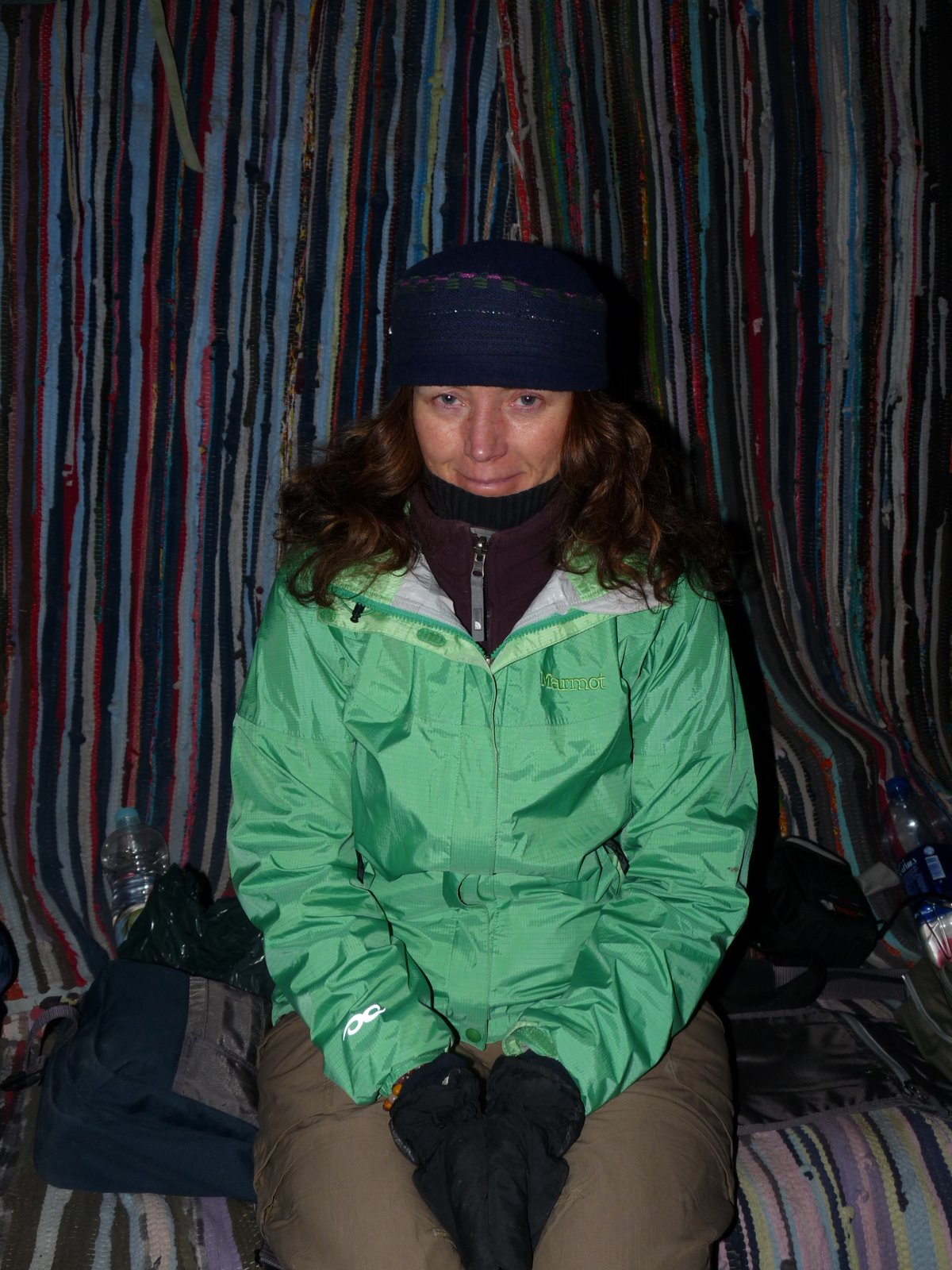 Our group had a Bedouin guide, who led us up the wide smooth trail in complete darkness. We were constantly adjusting layers as the group wound its way up into the darkness.

Some tourists choose to accept the offers of local Bedouins, and ride their camels up the trail. The temperature was close to freezing, and sitting still for any length of time seemed unimaginable. Camels have large soft padded feet, and are virtually silent in the darkness. Their approach is heralded only by their strong smell, and the occasional grunt or fart, at which point we hugged the cliff to give them passage.

The Egyptian dentist was in trouble almost from the beginning, having difficulty keeping up with the group. Within 30 minutes, the European girls had taken his pack and shared its contents between them. He spoke good English and Arabic, and was able to communicate with the guide, who spoke no English. As the incline steepened, he began to fall behind, In the darkness, we heard frequent cries of complaint in Arabic, imploring the guide to slow down. Diane and I had no trouble with the pace, and Diane’s sprained ankle was not a problem.

About half way up, the ground was covered with snow. Our trail runners held up well, but weren’t really the best footwear for the conditions. We hiked upwards through the snow, passing tea houses along the way.

The last twenty minutes to the summit are composed of 750 stone steps. These are the uppermost of 3700 stone steps making up an alternate trail, which comes up from the other side of the mountain. These Steps of Repentance were built by single monk as an act of redemption. We were the first party to reach this point. The steps were steep, and were covered with ice and snow. We still had about an hour before sunrise, and the guide recommended that we stop at the last tea house to wait, not only to try to stay warm, but perhaps to let another group break trail.

The tea house was built into the cliff face, consisting of rock walls and a wood and tarp roof, with stones on top. It was dark and cramped, lit by a single kerosene lamp. We squeeze in, and huddled together for warmth. Egyptian tea, for which Egyptians pay less than 1 Egyptian Pound in the cities, was available for 10 Egyptian Pounds (an exorbitant price, but more understandable given that both the water and fuel to heat it had to be carried up the mountain by the proprietor). Diane and I rented a blanket for 20 Egyptian Pounds (about $5 Canadian), which was highway robbery, but necessary given that we were no longer moving to stay warm. 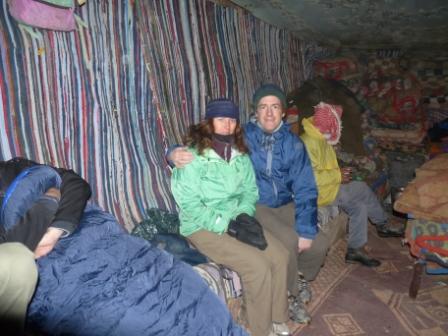 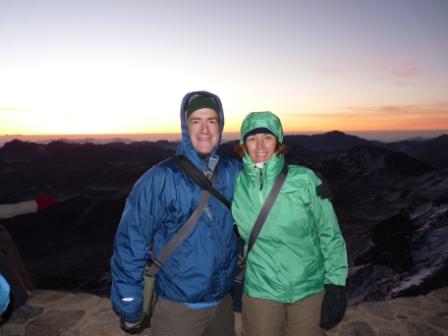 After about thirty minutes, we climbed the last three minutes to the summit, as the sky was colouring. On the summit was an old church, made of rock on the exposed summit. We shared the sunrise with several other groups, who had each made the climb during the night. The majority were religious groups, making their pilgrimages to this holy site. The Russians sang as the sun rose.

After about an hour on the summit, we hiked down past St. Katherine’s monastery, probably the oldest continually operating Christian site.  The Roman empress Helena had a shrine built here in 330 AD, near the bush where they believed that God spoke to Moses.

The next day, on the bus to the departure point of the ferry for Aqaba, we met an Australian who had made the climb a couple of days before. Near the start of the steps, he pulled his calf, and was unsure if he would be able to complete the climb. Luckily there was also a doctor climbing near by, who diagnosed it was a calf pull, and not an Achilles tear. She gave him 2 pain killers, and said that he could continue if he could stand the pain. He made it to the top, and on the way down, he road a camel as soon as he reached the part of the trail that they could traverse. On the bus, he told us that both he and Moses had climbed Mt. Sinai, and that they both received 2 tablets!