Leaving the South of India we returned to the North, catching a flight from Chennai to Kolkata, the capital of West Bengal state. Kolkata was previously known as Calcutta.

Diane was a bit apprehensive about coming to Calcutta. It is India’s second largest city with over 15 million people. In addition to being the source of the expression “the black hole of Calcutta”, its reputation is that of a poverty-stricken city. It is the location of Mother Teresa’s famous mission to help the sick and the dying. We expected it to be poor and a bit depressing, and while there definitely are these aspects to Calcutta, it also has many other virtues that surprised us.

We shared a cab from the airport with an American couple who were arriving to spend four months at a yoga ashram. It took almost two hours to make our way through the Calcutta traffic in the heat of the early afternoon. It was very hot. The streets were congested and the smog was thick, the worst we’ve experienced on this trip so far. Diane thought that we’d arrived in a hell hole.

After an hour of walking with our packs on due to Patrick’s navigation error, we found a cheap guest house just a couple of blocks off Park Street, home to many of Calcutta’s nice shops and restaurants (a bit like staying in the downtown east side and walking to India’s equivalent of Robson Street).

The next morning we went to a restaurant called Flury’s, a Calcutta institution since colonial days. We were amazed to find a nicely decorated and spotlessly clean café, as remarkable as anything in Vancouver. We drank good espresso and amazing Assam tea and enjoyed freshly baked goods. We had two peach danishes — the best we’ve ever had. We got into a pleasant conversation with a British lawyer at the next table and ended up spending a couple of hours over a lovely breakfast.

We then walked to the Victoria Memorial, built to celebrate Queen Victoria’s Diamond Jubilee in 1901. It wasn’t completed until 20 years after her death. It is a beautiful building and a grandiose example of colonial extravagance. It is surrounded by reflecting ponds and landscaped grounds, and it houses displays of paintings, photographs, and an interesting history of Calcutta. 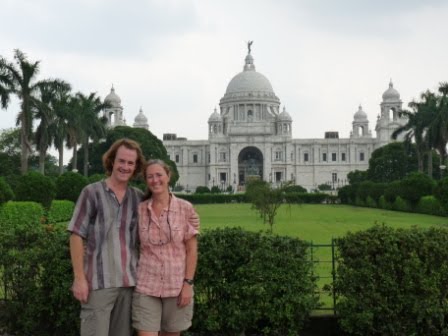 The Victoria Memorial is located in the Maidan, a large park in the center of the city (like Central Park in New York). We started to walk across the park, but Diane decided to retreat because it had long grass which could mask any number of unpleasantries, was partially flooded, and contained a lot of homeless people. The Maidan is also the site of Fort William, which the British built to protect their trading outpost here. In 1756 Siraj-ud-Daula recaptured the city from the British, and imprisoned the colonial leadership in cramped rooms underneath Fort William. In one night about 40 British died from suffocation, and it became known as ‘the black hole of Calcutta’. When the British re-captured the city they cleared the land around the fort, including demolishing an entire village, so that they would have a clear line of sight for their cannons. It is this area that became The Maidan.

We caught the Metro (subway) to an area called BBD Bagh to purchase our onward train tickets. It is named after three men (Binoy, Badal, and Dinesh) who tried and failed to assassinate British Lieutenant-Governor Lord Dalhousie in 1930, an early step towards Indian Independence. BBD Bagh is home to many of the beautiful old colonial buildings in Calcutta and houses many of the government offices today. It’s ironic that the area of these colonial landmarks is now named after three men who tried to bring an end to colonialism. 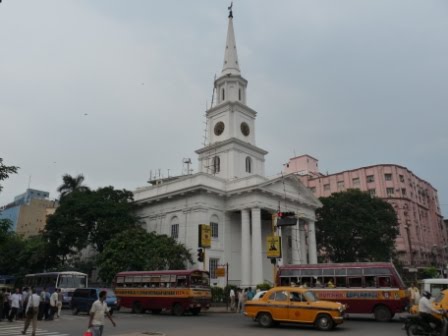 The Metro was packed, and we were squished, but the mostly male passengers were helpful and polite. It wasn’t unlike riding the Skytrain in Vancouver during the peak of rush hour — perhaps a bit more crowded like New York, but not as bad as Tokyo. Diane is often the only woman (or one of the few) when we do certain things in India, like riding some buses or trains, going to a bar, etc.

BBD Bagh is home to the Foreign Tourist Office of the Eastern Railway. Calcutta is one of the few cities in India that reserves a small quota of train tickets that can be purchased only by tourists. This is so that travelers like us that want to have a flexible itinerary can get tickets on short notice. The downside is that the price is much higher than if we’d booked the normal way. However, we knew that we’d be leaving Calcutta the day after the end of a major festival, along with everyone else in town, and that all other train tickets had been booked weeks in advance. The tourist quota is very valuable to us in situations such as this.

We walked back through the part of town where most backpackers stay called Sudder Street. The wide sidewalks on the major thoroughfare of Chowringhee Road were packed with street vendors, shoppers, and pedestrians. It was the first time we’ve really felt the crush of humanity since arriving in India. Men were standing on their street stalls yelling about their wares and prices. We needed to literally squeeze through the crowd. Diane was fully stressed.

But we made it to a bar called Blue and Beyond, on the rooftop of a nine story building from where we could look over the city at night. After some time and a beer to relax, we went to one of Calcutta’s most popular restaurants called ‘Peter Cat’, a very strange name for a family restaurant with the feel of the 1970’s steak house. We arrived at 10 PM and there was a waiting list with people lined up outside.

Such was our introduction to Calcutta. It is a very hectic, exotic and fascinating place, and after a few days there, Diane was a bit sad to leave it.