We spent most of last night wandering the streets of Calcutta. We had no idea
where we were or exactly where we were going. It was amazing.

We’re here during a major Indian festival called ‘Durga Puja’. It is celebrated in many places in India, but nowhere with the fervor of Calcutta. It is like Halloween, Mardi Gras, and New Year’s Eve combined.

Durga Puja celebrates the triumph of the Hindu goddess Durga over the demon Mahishasur who had taken over heaven and earth. The three main Hindu gods Brahma, Vishnu, and Shiva (all male) were unable to defeat him individually so they combined their powers to create Durga. This strong female goddess has ten arms carrying the signature weapons of each of her creators and rides upon a lion. Durga was able to defeat Mahishasur restoring heaven to the gods and earth to humanity, and the festival Durga Puja celebrates this triumph of good over evil. In Calcutta it is also believed that Durga leaves the home of her husband Shiva (yes, this bad-ass chick is married) once a year to her parental abode. She appears for only a four day period during the festival to eradicate all evil from the earth, after which she returns to her husband’s abode at Mount Kailash in the Himalayas.

People in Calcutta spend much of the year preparing for Durga Puja. Huge images of Durga and her children (Lakshmi, Saraswati, Ganesha, and Kartik) are prepared and placed in temporary structures called ‘pandals’ for public display during the period of festival. They are elaborate and beautiful, made primarily with painted clay over straw and bamboo. 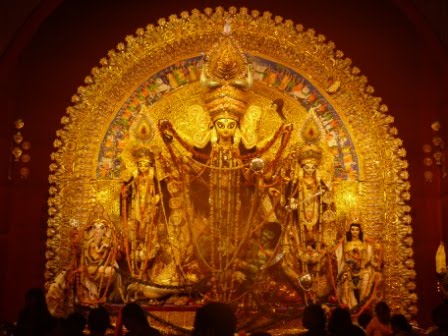 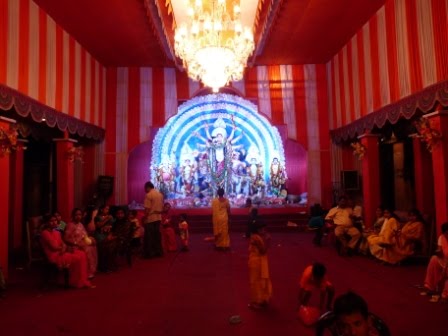 The pandals that house them are the size of houses and both they and the streets around them are lit up with electric lights, often animated in displays superior to the best Christmas lights. The streets are full of vendors selling food and drink for the visitors and loud music is usually played about twenty hours a day. Neighborhood associations are generally responsible for putting the pandals together with the help of corporate sponsorships. They work all year, similar to the ‘crews’ of Mardi Gras. It is estimated that there are 2000 pandals throughout Calcutta, with many more across the state of West Bengal. On our trip to the Sunderbans we passed many of them in small villages.

People visit the pandals day and night during the festival. They’re open twenty four hours a day. The crowds are largest at night, when the pandals and streets are lit up. The most popular ones receive tens of thousands of visitors per day, filing past in huge lines. It is definitely a family event, and parents walk with or carry their children. The women seem to be wearing some of their finest clothes. Traffic comes to a virtual standstill and public transportation can be overwhelmed. The police are out in full force to control the pedestrians and vehicles. We don’t have anything quite so overwhelming in Canada. Perhaps if the Vancouver Canucks won the Stanley Cup on Halloween night it would come close. Although the idols are religious for Hindus, there is a definite party atmosphere and it doesn’t appear to be a particularly spiritual occasion. There is a lot of noise, children running around, and drunken men wandering the streets. 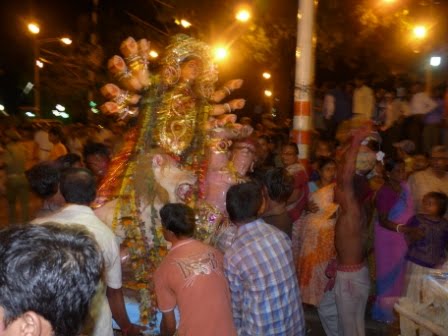 We visited about twenty pandals during the festival. Some were within walking distance of our guest house on our first night in Calcutta. It’s easy to find a pandal – just listen for the music, look for the lights, and follow the crowds. A couple of nights later, upon our return from the Sunderbans, we went ‘pandal hopping’ beginning at about 8 PM. We caught a cab to the south side of the city to see some of the most highly regarded pandals. All we had was their names on a scrap of paper. We started at Maddock Square and walked from there, reading the names of the places we wanted to get to, and asking people in the crowd to point us in the right direction. We walked for several miles through the streets, getting lost, then re-directed, then lost again. It was very hot, very humid, and very crowded.

We decided to head home at about 1 AM. We were both tired and Diane had a heat rash on her legs. The streets were still packed with people, as were the buses, but they were no help to us since we didn’t know where we were or which bus might take us where we wanted to go. We finally got a cab after about thirty minutes of trying, and made it back to our hotel at about 2 AM.

The next morning Diane was ill, perhaps overdoing it the night before, but she had sufficiently recovered by evening that we could walk down to the river to watch the immersions. The crowds were crazy, the drumming loud, and it wasn’t possible to get close to the water as the police were restricting anyone who wasn’t carrying an idol. We did get a few photos though. 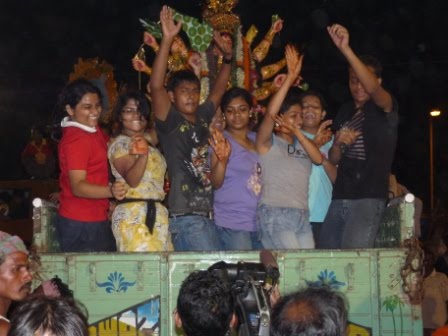 Durga Puja was something that we’d heard about in Canada, and we’re so glad that we were able to be here when it took place. It was bit earlier this year than normal, usually occurring in October or November, so it worked out for us. It was absolutely one of the highlights of our trip to India.