Many countries in Europe are part of the Eurozone, a monetary union of 17 European Union (EU) member states (a subset of the total number of 27) that have adopted the Euro as their sole legal currency.  Some members of the EU are not members of the Eurozone, including several that we’ll be traveling to.  This requires us to purchase or convert to a new currency in each country, with the associated effort of buying or converting upon arrival and spending or converting upon departure.  This was a constant headache when traveling in Africa, where currency exchange often had to be done in an open air, risk laden free-for-all in the ‘no man’s land’ between border crossings.  It less hassle but still an inconvenience when traveling through non-Eurozone countries.  To make things simpler, we often try to spend all of our remaining currency before leaving a country if we won’t be returning or needing that currency at a later date.

This is exactly what we tried to do in the south of Poland, before crossing into Slovakia.  Poland’s currency is the złoty.  In Polish, it literally means ‘golden’.  We needed some groceries and we had exactly 38 złoty and 75 grosze to our collective names.  Each grosze is 1/100th of a złoty (like pennies to a dollar or pence to a pound).  This converts to $12.02 Canadian at current rates. Not a lot for grocery shopping, but enough to pick up some needed items.

We headed in to a Carrefour Market with our iPhone calculator in hand and with the objective of buying groceries adding up to but not exceeding our remaining złoty.  It’s kind of like the final showcase of the long-running game show The Price is Right.  To win you need to get as close as possible without going over your remaining cash.  Note that this shopping game is much easier to play in Europe because there is no added sales tax.

Diane started picking out things and I dutifully added the value of each to our running total.  Shopping in Poland is not without its challenges due to the fact there is no English, French, nor typically even German on the packaging.  Sometimes it’s a bit of a guessing game.  When in doubt we try to ask for help, but of course the staff don’t usually speak any English either.  We were trying to buy some peirogis (the Polish spelling of what we normally spell as ‘perogy’).  Diane wanted the ones with potato filling, but in Poland they are often filled with cabbage or mushrooms or meat, so she wanted to be sure.  She asked the young lady who was serving them, but despite their best efforts to communicate, nothing was getting through.  I offered the word “kartoffel” which is German for potato, in hopes that she might speak some German or that the word might be similar in Polish.  No luck.  Apparently potato is ‘ziemniak’ in Polish.

Diane went to the produce section and returned with a potato, pointed at the peirogis and then pointed at the potato in her hand.  The young woman shook her head, implying that none of them involved potatoes.  She went away for a while and in a short time returned with another young woman who spoke a tiny bit of English.  We said that we wanted potato peirogis and she spoke to the other woman in Polish.  By now there were also 2 other staff looking on to our spectacle.  The other woman answered her in Polish and pointed.  It turns out that potato peirogis here are called ‘Rosyjski’ peirogis (pronounced ‘ros-yis-kee’) meaning ‘Russian’.  Problem solved.

Things got added and removed from the cart as we tried to get the most important things we needed with the right combined price.  In the end, I lost track of the total, but I knew we were in the ballpark.  Diane had two cans of tuna that were optional, so we went to the till with the intention of watching the display as the other items were totaled, and then adding the cans of tuna fish one by one if required to get closer to our total budget.  If we were over, I was prepared to sacrifice the bananas.

And so, after all of this, here is the result.  This is what $12.02 CAD worth of złotys will buy you in southern Poland. 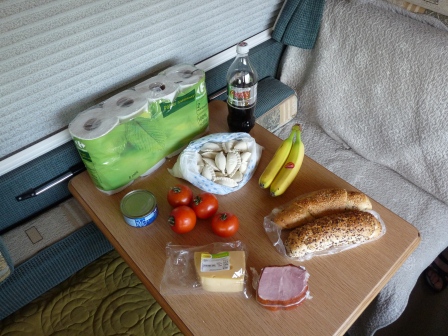 We think that this is significantly more than $12 would buy in Canada.

We had 1 złoty ‘and change’ left over (a strange expression given that the złoty, like the Canadian Loonie, is itself a coin).  We deposited our final złoty and groszy in the donation box by the door of one of the Wooden Churches of Southern Lesser Poland. 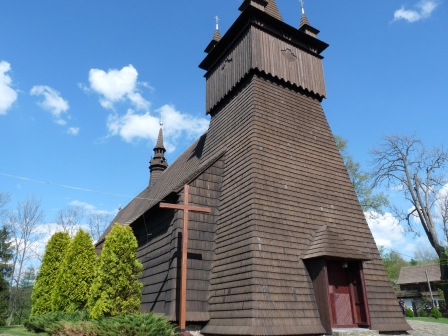 The interior was amazing. 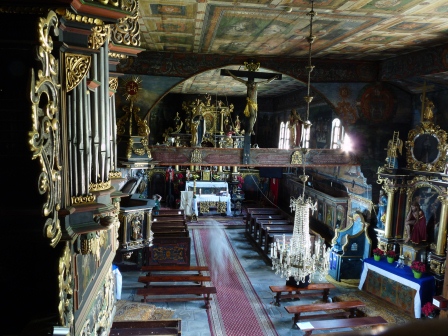 We headed to Slovakia ‘złoty-less’.