Our train ride took us to Bulawayo, Zimbabwe, the nearest city to Matabo National
Park, known to the locals as ‘Matopos’. This park is home to one of the best collections of San rock paintings, many of which are over 20,000 years old. 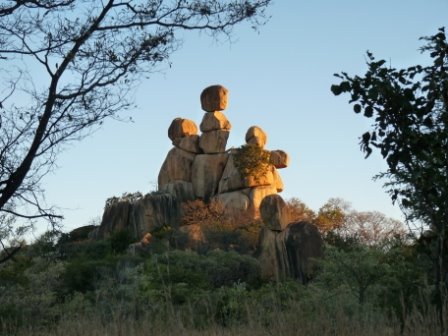 The San are better known as ‘bushmen’, the same ones found in the Kalahari Desert (which covers much of Botswana), and featured in the movie ‘The Gods Must be Crazy’. The San are a small-statured people, who traditionally lived in the brushy flat landscape that extends across all of Botswana. They are nomadic hunter-gathers who speak in a distinctive sounding language that utilizes lots of clicking sounds. The San have lived in this area for tens of thousands of years, and often dwelled among the many large bounders that litter the landscape. In many of these sites, they painted amazingly accurate pictures of animals and people, which have persisted to this day among the sheltered areas.

We came to Matabo to see the rock paintings, but we got more than we bargained for. Because the park is fifty kilometers outside of town and requires a 4×4 to get around, we made arrangements to go with a guide named Andy from Black Rhino Safaris. Andy is Zimbabwean, born and raised. His family lives in Zimbabwe, and they have survived the recent hardships that have devastated the country. Andy is a self-declared ‘professional hunter’. These days he is primarily a guide on photographic safaris, rather than hunting safaris, but he has killed at least one of almost everything there is to kill in Africa.

In addition to the rock paintings, the other reason that people come to Matabo National Park is to see the rhinos. Andy said that he could take us, ‘to see some rock paintings in the early morning, then once that was out of the way, we could go looking for rhino’. It sounded like a good combination to us, but we really hadn’t anticipated what was involved.

Just before noon, Andy stopped the vehicle, and called us out to look at the dirt road. He showed us where there were fresh rhino tracks. You could see the pattern from their skin imprinted into the soft sand. He told us that, ‘Several of them laid here during the night or early morning.’ At this point, he got his binoculars and rifle from the truck, and we set out on foot, hunting for rhino.

Andy was an impressive tracker, following sometimes imperceptible tracks on soft and hard ground, through the grass and the bush. He turned and twisted, gesturing with his arms as he followed the smallest of indicators. He showed us how to tell the difference between white rhino and black rhino tracks. He stopped to feel their dung and told us how old it was (based on how crusty and how warm). He could tell the age of a rhino track by assessing the overlapping tracks from other animals, and whether these other mammals, birds, and bugs were nocturnal or not. This guy was a real African bush man, right out of the old safari movies.

As we entered the brush, he stopped to whisper the only safety instructions, “Walk in single file, don’t talk, and whatever happens, don’t run.” That was it. Patrick wondered whether this should perhaps have been discussed previously, allowing time for a few questions. But Andy was hot on the track, so that was all we got.

After about twenty minutes, we heard a noise, and peering into the dense brush, Andy said that there were two white rhino in there. We saw only leaves and branches. Nothing resembling a rhino. He signaled us to wait while he went ahead to investigate. Before he left us, he whispered, “If things go really wrong, climb a tree”. Diane looked around, and noticed a severe lack trees that looked both climbable and rhino-proof. Patrick wondered how he was supposed to get to a tree without running.

From fifteen meters away, making signals like the Special Forces, Andy indicated that there were four rhinos, and that we should follow him. We circled around the rhinos, trying to find a vantage point where we could see them through the foliage. We found a spot with a good view of one rhino, about twenty meters away. The others were somewhere in the bush, and we kept looking around and behind us just in case. Presumably Andy knew where they were. Andy indicated that Patrick could step forward to take pictures of the visible rhino. 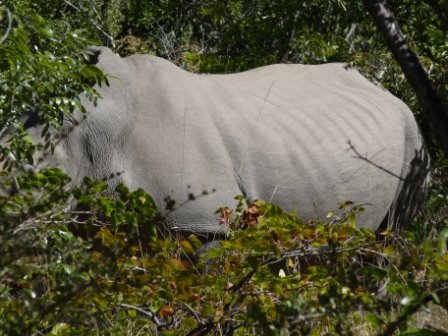 Here is the only rhino picture that turned out. In case you’re wondering, the rhino is facing the left, and its head is obscured by foliage. Although you can’t see it in this picture, Patrick was surprised at how long and sharp looking its horn was. Apparently the horns of rhinos in captivity get worn down, but in the wild they can be up to 4 feet long!

When Diane adjusted her stance to get a better view stepping on a twig in the process, the rhino snapped his (or perhaps her, we have no idea) head up to stare straight at us. After a few seconds, the rhino started to run directly towards us, accompanied by two others that appeared from nowhere.

We stepped back, and Andy started to yell. As the three rhinos closed in on us, his volume level increased. There was the slightest hint of desperation in his voice as he reached his crescendo. He also shouted to us, “Don’t Run!”, which was perfectly timed, as that was exactly what we wanted to do. Andy raised his rifle and removed the safety. Diane melted into bush beside us, trying to get very small. The rhinos were running at us full speed, and were within twenty five feet. At what seemed the last possible moment, they swerved around us to our left.

Afterwards, Andy asked if we were OK. He apologized and said, “That’s not what normally happens.” He also said, “Another two steps closer and I would have fired a warning shot.” Looking back, Patrick seriously doubts whether there was enough time to warn the rhinos, and still get off another shot with his bolt action rifle if they didn’t stop. Andy surmised that these white rhinos, which are typically more docile, felt trapped between us and a creek behind them (that he wasn’t aware of), and perhaps couldn’t see us clearly enough to know where we were and how many of us. Rhinos apparently have poor eyesight from straight on, with eyes located on the sides of their head and large, especially pointy looking horns blocking their forward vision. Andy then said, “I think this would be a good time to go for lunch. We can track some more rhino in the afternoon.”

We had lunch overlooking a hippo pond, surrounded by a troop of overly bold baboons. After a short drive, we again started walking to find rhinos. Diane was definitely torn. On the one hand, she hoped to see more rhino, but she was thoroughly afraid to do so. Perhaps we could find some well-behaved white rhino and view them from a distance?

Andy explained that we were heading into an area frequented by black rhino. They are smaller, faster, and much more aggressive than white rhinos. Andy said that if the rhinos that ran at us in the morning had been black rhinos, he would have needed to shoot. Apparently when black rhinos feel threatened, they charge first, and ask questions later. Actually, they don’t ask questions. Patrick wonders which of the three he would have shot, and whether the other two would have noticed before they impaled us.

We were walking up a dry creek bed. Andy said, “We’ll circle around through the rocks on the right. That’s where the rhinos often sleep”. Patrick was hoping that they slept there at night, and not during the afternoon, assuming that black rhinos would be even more aggressive when woken prematurely from their afternoon nap.

Andy stopped and said, “Can you smell them”? He then loaded another two gigantic bullets into his rifle, and said, “I always like to have a couple extra in the magazine when I’m going into black rhino territory”. Diane and Patrick looked at each other with raised eyebrows. We wove between the closely spaced rocks and trees, and Andy showed us the flattened places where the rhino rest. The terrain was gradually narrowing, and we dropped back down to the river bed. Later Andy told another guide that he was pretty sure the rhinos were there, but didn’t feel safe proceeding into such close quarters.

So we walked back to the vehicle and drove a short distance to an open area filled with eight foot high grass. Does grass even grow that high in Canada? We pushed through the grass following the path of least resistance, where other animals (presumably rhino) had passed before. Patrick was thinking of a joke:

Q. How do you find a rhino in the tall grass?
A. You know it when you feel it.

We didn’t find any rhino in the grass, but afterwards Andy said, “I hate walking in that tall grass. You never know what you’re going to find, until a rhino tears you a new anus”.

Unfortunately and fortunately we didn’t find any more rhinos in the afternoon. But we did have the most exhilarating day of art viewing we’ve ever had.

5 thoughts on “Whatever happens, don’t run”